The 12 Blackest moments from the 73rd Annual Golden Globe Awards

So, about the Golden Globes. Initially, I had zero intention of watching it—I’ve been underwhelmed with Hollywood for numerous reasons lately—but something in me just had to see what was going to happen. While I was a bit disappointed with pretty much most of several aspects of the show, and I didn’t get to see Idris Elba, there were still moments of the night that made me genuinely smile, and moments that made me cackle wholeheartedly
1) The Red Carpet Slays. Well, first off, Angela Bassett refuses to age. Laverne Cox came in and showed everyone up in a gorgeous Elizabeth Kennedy dress. Uzo Aduba was sparkling. And Will & Jada were the epitome of Black love. Just yes…#Goals Photo: Life & Style Weekly 3) Viola Davis showing everyone how regal she really is 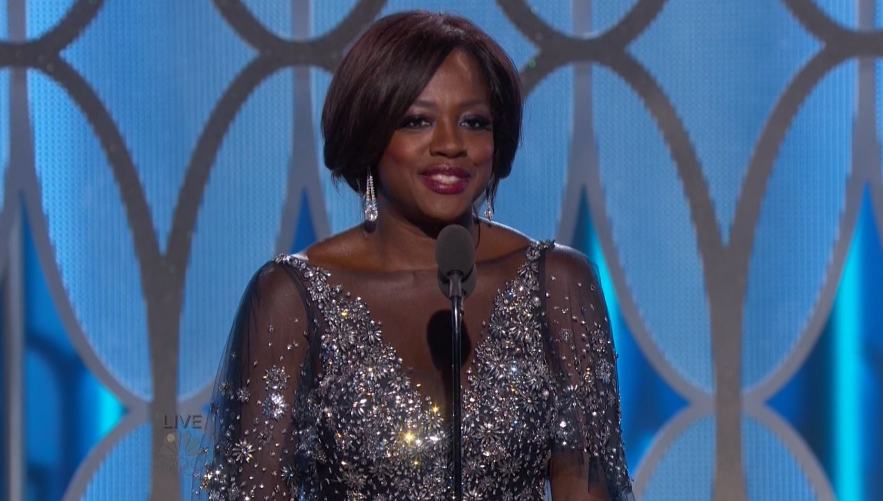 5) …And then the reaction after Quentin Tarantino said “ghetto”. Because we all collectively thought the same thing…

6) Queen Latifah’s facial expressions, which summed up our thoughts for the night..

8) Denzel Washington becoming the 3rd Black recipient of the Cecil B. DeMille Award and seeing his family on stage with him…

Photo: Deadline.com 9) …Then watching him fumble through his speech, because he didn’t have his glasses (which his wife suggested he needed.)

10) Taraji P. Henson became the 3rd Black woman to win Best Actress in a TV Drama (Yessss, Howard University represent!) and fussing at somebody for stepping on her dress…

11) …And the best part of it all was her passing out cookies to the audience on her way to accept her award! Loved it!

12) Then finally telling the Golden Globe Awards, as a whole, "You gon' wait!"