Spike Lee's next film focuses on the Mizzou protests

On Saturday, director Spike Lee attended the True/False Film Festival in Columbia, MO for the screening of "Concerned Student 1950", a 30-minute documentary on the organization with the same name
Two days later, Lee was on Mizzou's campus filming the student organization as they protested from Gaines/Oldham Black Culture Center to Traditions Plaza. The footage will be used in Lee's ESPN digital short film titled "2 Fists Up." This short film branches off of ESPN's widely known Emmy-nominated 30 for 30 documentary series. According to ESPN, the film details the Black Lives Matter movement, and how it not only caused Mizzou's students and football team to join in solidarity, but America at large
Kendrick Washington, Concerned Student 1950 member says of Lee, “first of all, Spike is an educator. This is something that he follows. He’s not new to understanding institutionalized oppression, racism, any of that. So, his questions and his approach was more a reflection from his work and our drive behind the movement, so it was a dialogue. We were discussing oppression on various settings.” 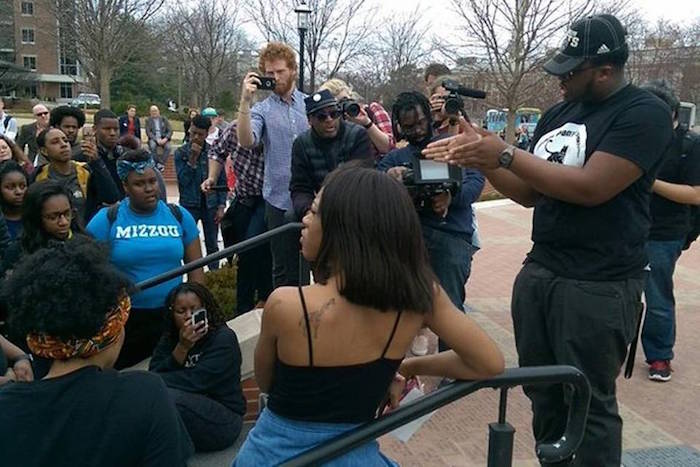 Look out for Lee's digital short, premiering in May.

READ NEXT: Concerned Student 1950' will be honored with NAACP Image Award