A Millennial Love Story: How This Couple Thrives Through A Shared Passion For Art

A conversation with Yasmeen and Stephen.

In 2012 Stephen was asked to take a last minute trip to India on a mission to capture photographs of orphaned children suffering from HIV. He was later approached to create a fundraiser photo exhibit with those images, another last minute request with a 48 hour turn around time. To his professional and personal benefit Stephen was able to work quickly, pull of the exhibit and within a couple days posted on Instagram about the exhibit he would soon be hosting.

Yasmeen and Stephen had already been following one another prior to the post, but as soon as Yasmeen saw it she made plans to attend. When she arrived at the event she was greeted by a man at the entrance who held the door open for her as they locked eyes and not only recognized one another from the social platform but also immediately saw something beyond that moment.

The couple has officially been together for two and a half years and Yasmeen won’t call it dating, she knows that this is more. As business partners with their Washington, DC based photography business, District Photography, the couple comes close with love quite often shooting engagements, weddings, maternity and newborn photos. They acknowledge that their partnership is strengthened through their work together and are inspired to continue to love by working together.

What does black love mean to the black community?

Stephen: It means seeing a successful relationship with people that look like you. That’s important to me because, until I went to school at Howard I didn’t realize how important it was to see people doing things that you admire who look like you. I admire people who are just doing things I wanted to do, I wasn’t really seeing myself in those positions I was just emulating.

Yasmeen: I would also say sharing some similar experiences. Black love to the black community means a sense of healing. It doesn’t just mean love bet man and woman, it’s also a way of showcasing our love for everyone within the black community. Because society itself is also based on relationships, so if there’s a strong relationship between two people and there’s love in that relationship that love spreads and permeates throughout the community. So if we are strong in our unit we can spread that amongst everyone else.

What would you say is the hardest part about being a millennial in a relationship in today’s climate?

Yasmeen: Technology – we’re just coming from a farm so I’m just thinking about how technology has taken us away from earth and our connection to the earth so I really think that is a difficult part of being a millennial in this society. You forget that life was not always this fast and that there are times that you need to slow down and really enjoy life.

Stephen: To her point, being able to do things at your own pace , even inside the realm of a relationship, has been taken away from us because we are constantly being bombarded with other steps people are taking in their relationships and careers. Yasmeen and I go between being introverted and extroverted, we naturally move away from things like social media in order to re-center ourselves and gain energy and replenish ourselves. I think that that’s important. It keeps a good balance in our relationship to take that time away. We know that’s healthy. It could be a challenge if we didn’t already have that built into us knowing that we need to go meditate or go do yoga, we need to spend time away from our phones and read a magazine or a book, get something tactile rather than interacting with people via digital media.

What are your expectations of marriage? 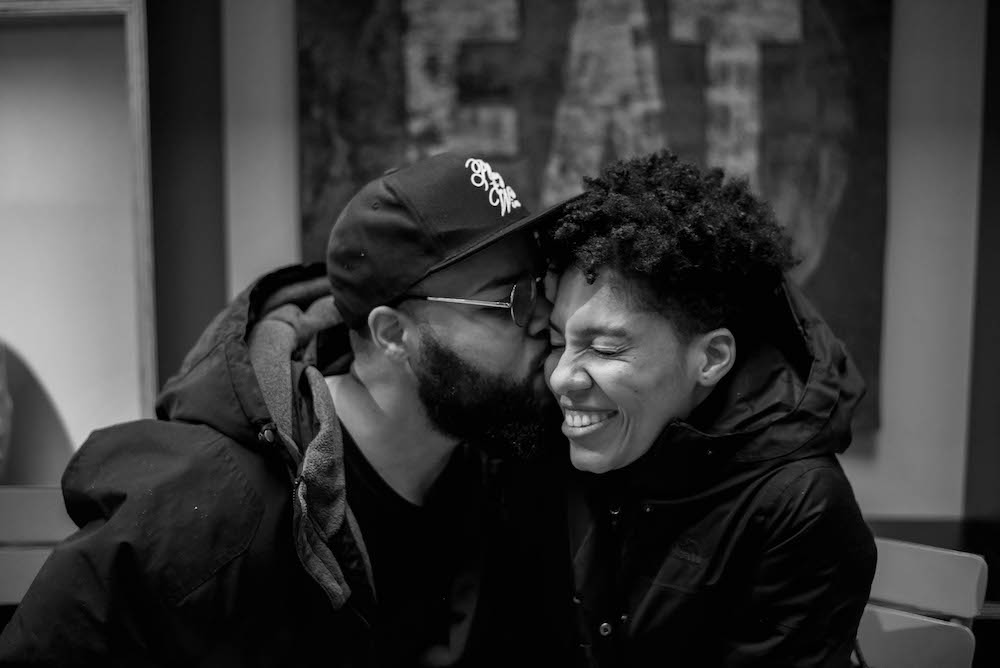 Do you think your relationship inspires others?

Yasmeen: Yes, honestly if we meet people for the first time or generally when we see people that follow us on IG or they say they love our relationship they say that they love the fact that we work together. We are able to work together, not only in our relationship but in our business.  Some people have said to us that they would love to do what we’re doing. And the fact that we have a photography business that allows us to move around whenever. We can do trips on a whim. It’s not even just a job, it’s our lifestyle and something we both love. Having that passion for each other and our art together is something that brings us together and other people see that.

Stephen: People are always looking. I have several nieces and nephews and I know that they are looking to see what uncle Stephen is doing. I have a niece in particular who is very drawn to Yasmeen. I know that our relationship is being watched and I hope that it is inspiring to anybody that’s looking. Not because of how much fun we’re having but because of how difficult it is to be in a relationship in general. It’s not easy. There are things that are wonderful about it but it’s still hard. I hope to show someone that even though being in a relationship is a very difficult thing to do it’s worth doing.

What have you had to compromise on?

Stephen: She was an only child growing up and I’m one of eight children.

Yasmeen: I have siblings now, but they’re so much younger. So I did grown up as an only child so when we got into a relationship the whole sharing food thing was like, yeah.

Stephen: The first time it happened we were at Nando’s, I reached for a piece of her garlic bread and she looked at me like I had just stole a diamond.

Yasmeen: I remember that feeling. Nando’s has incredible garlic bread. So that’s a compromise for me, sharing.

Stephen: For me, sharing information about what I’m doing throughout the day, week or month. I’m not used to anybody keeping tabs on me, but you have to do that when you’re in a relationship. I could wake up and have a whole day planned and she’s like, wait, you didn’t tell me any of this. I had to get in the habit of that, iCal is a big help. That was something that I had to reset. I have to share my schedule with her it’s considerate and it’s beneficial to both of us. I have business partnerships and my relationship with Yasmeen and if you don’t have an open line of communication you’re going to have some problems.

Who do you go to for advice on your relationship?

Stephen: My parents have their ways of communicating things to me, I don’t have to ask them explicitly. I’ll be out with my dad and he’ll say something like ‘your mother was right about that’. That’s his way of saying this is how me and your mother work through disagreements in life or that healthy tension that comes with trying to raise a family, build a household or just live. Being able to watch my grandparents, parents and siblings has been a great education on what might work, what doesn’t work and what I wanted out of a marriage. That was shaped by my being exposed to their relationships. I knew for me it was very important that I had somebody I could work with because I knew I wanted to be an entrepreneur since I was 13. My mom was an entrepreneur and my father has a 9 – 5 and I saw the tension. You come home from your 9 -  5 and see the entrepreneur and you’re like, I’ve been at work all day what have you been doing? But the entrepreneur has been working all day as well but it’s the optics of it and I wanted my partner to understand that without me having to explain it. Her father is an entrepreneur so she was exposed to that throughout her entire life. She understands that a 9 – 5 is not in my DNA.

If you could sum up love in one word what would it be and why?

Stephen: Sacrifice. I do wedding photography, I’ve had to relive that moment where two people are professing their love and commitment so many times and it’s given me a crystal clear understanding of what it means to be married to someone. You’re saying “I’m not going to just get my way anymore” we have to come to a compromise about when to proceed in everything from this moment on and we’re going to say it in front of all these people so that they know this is how we’re going to operate our lives from this moment on. People think sacrifice is a pejorative word, they think it’s negative, but you gain so much when you unite with somebody you love and has your best interest at heart.

Yasmeen: Life. I know every child who is born isn’t necessarily made out of love but I do believe that love is a precursor to life. When two people join together, through marriage or just being together, and have the potential to conceive that love has the potential to bring about life. We do a lot of newborn photography and maternity so that’s something that I will experience eventually, bearing a child, to me that’s what I think about when I think about love.