We all know that Ava DuVernay is the cinematic queen of our hearts. Her work behind the camera is representative of us in every way that counts. And in the social justice space, she is a strong celebrity voice we can count on
Now we add another accomplishment to her long list of deserved accolades. Earlier this week, the list of tax credits given out by the California Film Commission was released

And DuVernay's upcoming A Wrinkle in Time got $18.1 million in credits. 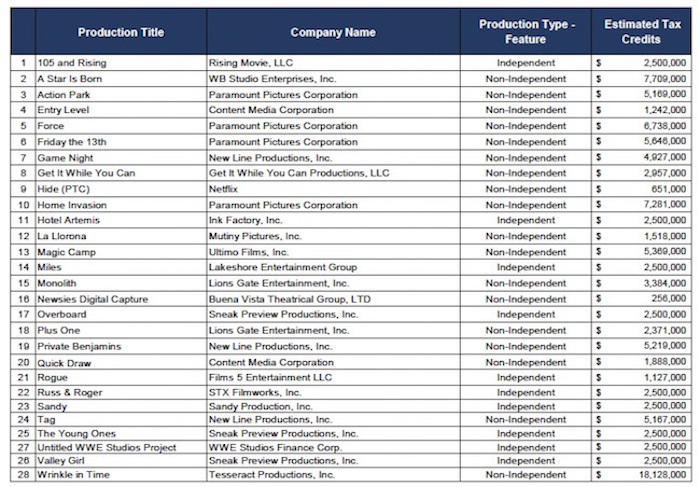 Photo: California Film Commission That's the largest incentive a film has received since the California senate passed an expansion back in 2014. More importantly, it's been confirmed that A Wrinkle in Time's budget is going to be $100 million or more. That's the biggest live action film budget any black woman director has had, ever. And it's the second biggest of any woman director, period
Just for context: The budgets of the past three major motion pictures by black directors were Straight Outta Compton ($50 million), Dope ($7 million), and Creed ($40 million). Oh, and did I mention that Oprah is starring in it? This is huge, fam
A Wrinkle in Time is a classic science fantasy novel written by Madeleine L'Engle. The story centers on a young girl whose scientist father goes missing after he works on a project called the tesseract. Ms. Winfrey's character is rumored to be Mrs. Which, a very wise and knowledgable woman that proves very helpful on the journey to come. Let's make sure we support Ava and this film, as it marks an important milestone in history for black women directors. And let's also continue to call for representation behind the lens, so this becomes the norm in Hollywood – not the exception
A Wrinkle in Time is now on track to hit theaters on July 28, 2017.

Kash Doll On Rooting For Everybody, And Her Secret Talent