Albert Einstein, a theoretical physicist, was a genius renowned for his extraordinary intellectual ability. However, unbeknownst to many, he struggled severely in school and with social interaction. He was a child of special needs, and similarly, many of the United State’s four million gifted children are as well. For that reason, Atlanta Gifted Academy, a school based in Marietta, GA, is on a mission to provide families of gifted children with the support they need to help their kids excel academically and beyond.

Claire Anderson founded AGA in 2012 after recognizing that her son, Caleb, was extremely advanced for his age. The former school teacher taught her child sign language and how to read at the age of eight months —and by 18 months, he was in the first grade at the now closed Shreiner Elementary. Fast forward to the present and Caleb is a 7-year-old fifth grader with an IQ of more than 140.

However, things were not always so positive. Before attending his mother’s school, Caleb was often seen as a distraction and a troublemaker in class, a result of boredom and a lack of mental stimulation. Caleb’s reality was not unique to him. In fact, it is the experience of many talented, but often misunderstood black and minority children across the country.

“Imagine being a parent and having a school or a teacher calling you every day telling you your child is bad. You think they have autism or a disability but it turns out that they are gifted,” Anderson said, “Then when they find out [that your child is gifted] there is nothing they can do. So it is like your child is being punished for being smart. I had to do something about that, not only for my child but for others.”

Atlanta Gifted Academy distinguishes itself from other schools with an impressive curriculum, one that offers a 'personalized learning plan' for every student, matching their abilities, strengths and interests. Students are taught in S.T.E.M, learn Spanish and Mandarin and also have access to music lessons among other services not available at many traditional schools. Not only does it provide an advanced educational environment, students are also developed socially and emotionally. This is a major area of importance, especially for parents. 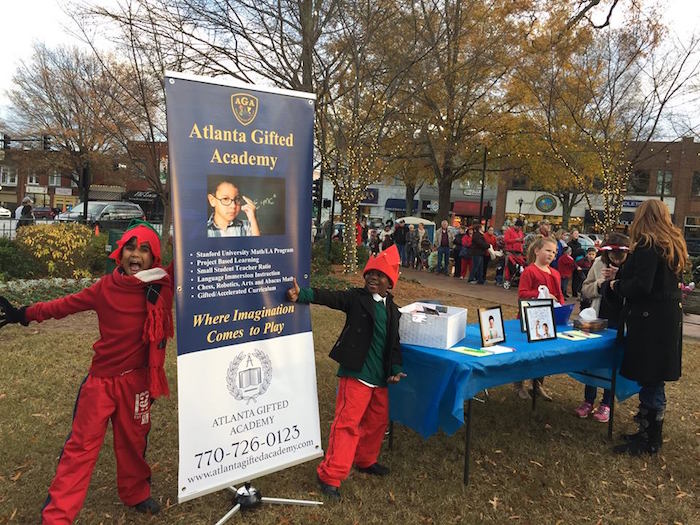 Koel Roy was impressed the moment she stepped foot in AGA during a tour earlier this year. Immediately, the curriculum and the individual attention that is given to the students resonated with her. In public school, her son, Shaurya, consistently got in trouble and teachers did not know how to deal with him. The 8-year-old with an IQ of 145 was acting out because he needed more than the school could offer.

“Kids who are gifted are just like kids who have learning disabilities, but are on the other side of the spectrum,” Ms. Roy said, “They need that extra attention and my son was not receiving it. His teacher had 27 students in her class. That is an overwhelming situation for anyone.”

Ms. Roy did have Shaurya enrolled in a gifted program at the time, but it was only offered once a week for a few hours. That was insufficient for a boy who already had goals to be a molecular physicist, so she opted to look elsewhere, ultimately landing at AGA. “The small class sizes at AGA is a huge advantage in teaching them what they need to know,” she said, alluding to the academy’s teacher-student ratio of 1 to 7, “At school, their curiosity is never satisfied. They are encouraged to ask questions and they are encouraged to be who they are. Also, the personalized learning plans help them to progress so quickly.”

Evita Wells agrees. Before moving to Georgia, her son Percy was enrolled at Michigan Montessori school. He was always on the go, so she took him to a psychologist for fear that he had ADHD. An IQ test was administered immediately, revealing that Percy, at the age of 4, had an extremely high IQ. Upon arrival to Georgia, Percy was admitted to Woodward Academy, a prestigious private school in metro Atlanta. He was a bundle of energy, and his teachers were unable to give him the support that he needed

“They were giving him sight words at five years old when he had already mastered them at age two and was reading chapter books at age four,” Wells said. “I knew that he needed to be in an environment that was more challenging in order for it not to become a behavior issue. Claire and her staff are able to adapt to the way that children learn. Their curriculum is based on the Stanford University model and they make sure [that] school is challenging for students.”

So far, AGA has received a tremendous response from the parents to the extent that some are willing to drive as far as 45 minutes every day for their children to go to school there. Not to mention, the cost is comparable to the annual cost of daycare at around $11,900.

“People say this is a Godsend,” says Anderson. Moving forward, AGA’s goal is to increase enrollment to about 250 students. Right now, there are only 12 kids attending full-time because not many people know about it - but that is about to change. Anderson’s vision is grand. “I see teachers who are highly qualified, students who are engaged and passionate about learning and an environment where parents are involved and have a say in their kid’s education,” she said. “I see us winning awards.”

To learn more about Atlanta Gifted Academy, visit www.atlantagiftedacademy.com or call 770-726-0123. To schedule an interview with AGA’s founder, Claire Anderson, contact Ivan Thomas at 202-904-4790 or intriguemg@gmail.com.

Claire Anderson is a dynamic force in the field of education. She is the founder and Headmaster of Atlanta Gifted Academy (AGA), located in metro Atlanta and holds a Master's Degree in Elementary Mathematics and Literacy. After successfully teaching her one-year-old son to read and add, Ms. Anderson created a program called "Talk 2 Your Baby," which focuses on early communication, phonics and mathematics. Her program and trendsetting curriculum has changed the lives of gifted children and provided relief to parents who struggled to find the right educational setting for their gifted children. She now speaks at various events to share her work and expertise. Website: atlantagiftedacademy.com Facebook: www.facebook.com/atlantagiftedacademy

READ NEXT: Why I'm genuinely afraid to have black daughters