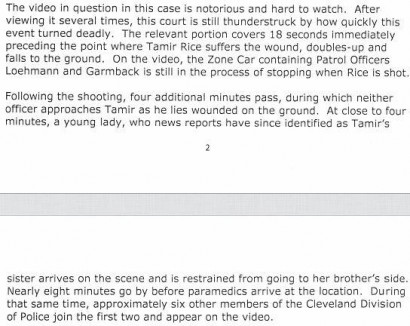 On Thursday, Judge Ronald B. Adrine in Cleveland ruled that probable cause existed to charge two Cleveland police officers in the death of a Tamir Rice in 2014. Rice was shot by police Officer Timothy Loehmann,  while he was holding a toy gun. The judge does not have the power to order the arrests without a complaint being filed by the prosecutor. According to the Los Angeles Times, the following is the charges against the officers

What happens next is unclear, but this is certainly a step in the right direction. Read the judges full order via NBC here.