Ashton Brooks has broken more barriers before graduating high school than many do in a lifetime. In addition to being the star kicker for the Midland Dow High School football team in Michigan, she also sings, plays soccer and secured a partial academic scholarship to Northwood University. Even with all of this excellence, Brooks was unable to escape the petty sting of racism when a fan mockingly likened her to a gorilla in an Instagram post after a recent football game 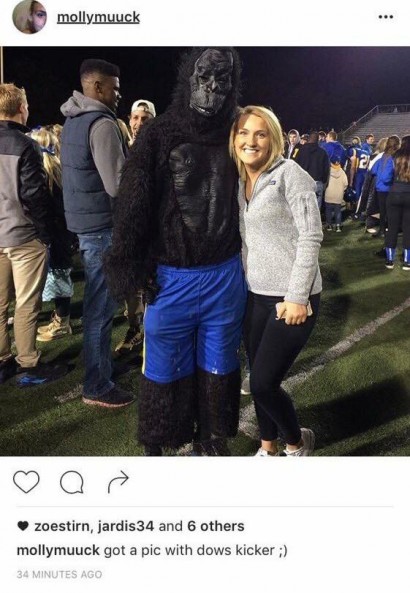 Photo: @ShaunKing via Twitter
Shaun King, justice writer for the New York Daily News, broke the story by tweeting the image from an Instagram post that showed a fan standing next to someone wearing a gorilla suit with a photo caption identifying the gorilla as Brooks. The post has since been removed and the Instagram account deleted

In response to the incident, the Superintendent of Midland Public Schools sent the following statement to USA TODAY Sports:
"The Board, Superintendent and High School Administrators have thoroughly investigated this incident,” the statement continued. “The girl who posted the photo and caption is a former MPS student. She last attended MPS in the 2014-15 school year and now college age. We are equally offended and upset that our Schools and Community have been connected to her comments in this matter. The comments made do not reflect the beliefs of our District or Schools in any way."
"During the investigation it was evident that the student in the costume was surprised to learn that this post had been made. He was shocked that some people thought that he was complicit in staging the photo. We believe that based on what we have learned, he was unaware of the post being made and specifically did not know about the girl’s comments until we addressed it with him" …
“Midland Public Schools will continue to track this information. We will condemn this type of racism and misuse of social media within our Schools, District and Community."
Amidst the upheaval, Brooks continues to contribute to the Chargers' 8-1 season start as star placekicker

Stay connected to all things Black Twitter, news and the best content on the Internet by signing up for Blavity's newsletter.