"I want to be the first black bitch on television." -Diahann Carroll, People interview 1984
Meet the OG of Black Girl Badassery in American television history

Next up: Dominique Deveraux

Before you knew her as Marion Gilbert, Whitley's overbearing mother on A Different World, Diahann Carroll wore the crown as a pioneer for Black actresses on TV. Her 1968 role starring as Julia, puts her in a league of her own. Her resume includes the prestige of being the first African-American woman to star in her own series. And not just any series, a sitcom where the story is centered around her life, but not in the subservient manner American viewers were used to seeing Black characters. But, we'll save Julia for later
Let's fast forward to the 1980's, when primetime soap operas dominated entertainment. Dallas, which premiered in 1978 with the story of a family legacy stemming from an oil tycoon, garnered high ratings on CBS for its deception and wicked dialogue. Dynasty followed suit with a similar premise in 1981. Three years later the writers pulled out a secret weapon by the name of Dominique Deveraux, the nighttime "bitch" Diahann Carroll aspired to be 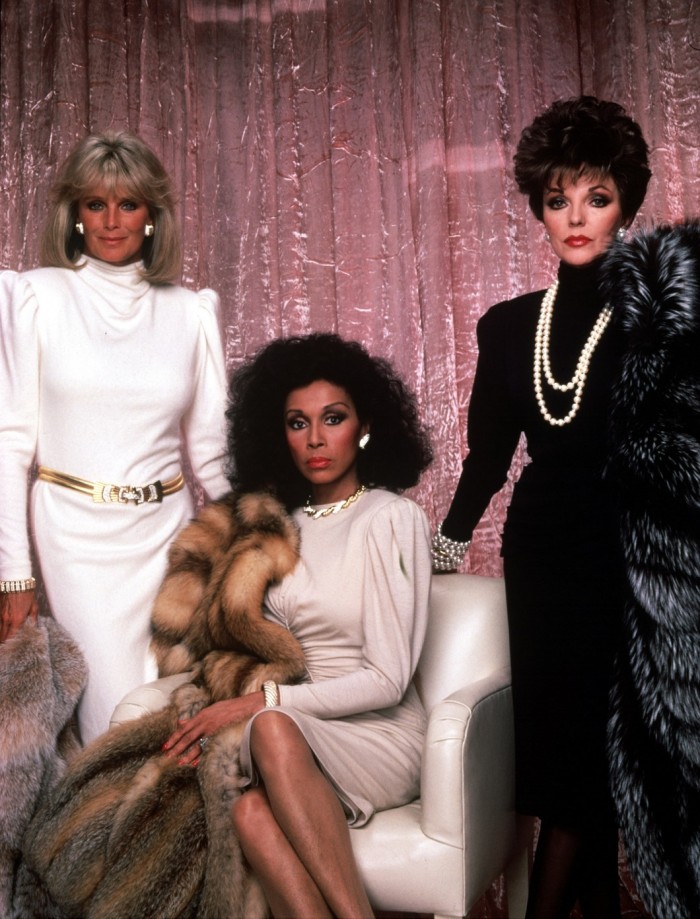 Photo: dynasty Complete with furs, diamonds and 80's high fashion gowns with shoulder pads arched to the Gods, her wardrobe matched the diva character she flawlessly conveyed. And her slick tongue matched the fine clothing down to her shady boots. Dominique once told a front desk clerk of a hotel that, "I don't sleep in my clothes, and I don't sleep with my clothes."I need a bedroom for me and a bedroom for my clothes." Badass
As a key player in town's upper crust of wealthy socialites and millionaires, she held her own as a minority. There was no need for code switching. She made her presence known never playing second fiddle to anyone, exercising her cutthroat attitude in a graceful tone. Dominique made sure the bitches had her money
After a culture of Black entertainers taking a backseat to White characters in docile fashion, Dominique hit a lick, both literally and figuratively. The 1980's saw a slew of catfights like no other and Dominique was never afraid to slap those who got out of line. In an iconic scene with Alexis Colby (Joan Collins), Dominique fights for her reputation where in a town such as this, it's worth more than all the riches in the world. In true Dominique fashion, she slapped her arch nemesis in her place

But that wouldn't be their last rodeo

"I didn't thank you for your presence."

Just think, a moment such as this paved the way for Bernie in "Waiting to Exhale".

Photo: Tumblr The role of Dominique only lasted for three years on Dynasty setting a pace for Black female game changers, or what I like to call Black Girl Badassery. And, she was over the age of 40 exchanging jabs (verbally and physically) with the best of them. While you cannot slap your way to the top, you can demand respect by any means necessary, and Dominique did just that. Before Olivia handled things in Scandal, Dominique took what was rightfully hers without waiting for permission