This is what Hillary Clinton had to say at Black Girls Rock!

Before it airs Tuesday night on BET, exclusive red carpet images and bits from the 2016 Black Girls Rock! awards show have surfaced on social media. This year's honorees include Rihanna, Shonda Rhimes, Gladys Knight and Amandla Stenberg. Taping for the award show took place on Friday at the New Jersey Performing Arts Center
Of all the star-studded sights and sounds, an appearance by democratic presidential candidate, Hillary Clinton may go down as the night's biggest 'wow' factor
Before introducing BGR founder, Beverly Bond, Clinton addressed the crowd with powerful words on how the strength of Black women leaders have shaped her as a person 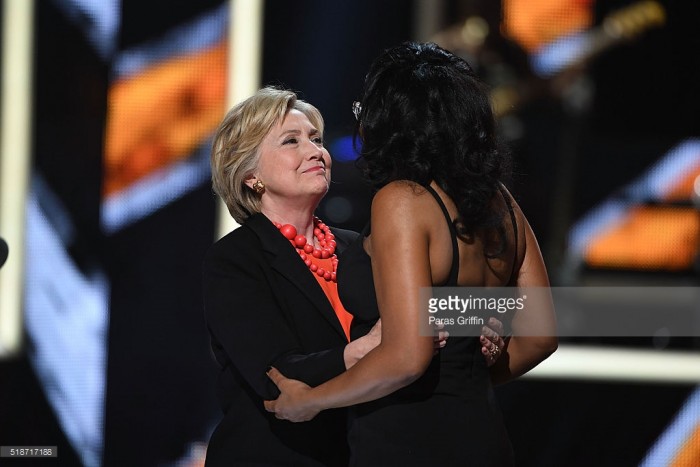 "There are still a lot of barriers holding back African Americans and black women in particular, so a gathering like this filled with so many powerful, strong women is a rebuke to every single one of those barriers," Clinton said. "All of our kids, no matter what zip code they live in, deserve a good teacher and a good school, a safe community and clean water to drink." Her speech received a standing ovation

The sincerity of Clinton's message is accompanied with speculation.

Am I the only person not here for Hillary Clinton being at #BlackGirlsRock on #BET ? She is not for US!

READ NEXT: Are You Ready for This Biopic? Jesse Williams Shares an Exclusive with #Denzealots