The Weight of Impostor Syndrome

It can be frightening when your dreams come true. There's joy of course, but for those of us who still fight with impostor syndrome, the weight follows us
I don't know anyone who wakes up with the sole intention of pursuing radical mediocrity. That's something people's actions denote, but rarely their words. Everyone is trying to get somewhere but the journey is arduous, lonely, and costly. It's much simpler to be "ok" at your craft. There's no risk associated, and you can do fairly well with minimal effort attached
I'm not that afraid of the failure per se. What keeps me up at night, is the idea of not maximizing opportunities during that small window of space in which they are presented. I grew up around people whose only mistake was that their lack of resources meant they couldn't realize certain dreams (not for lack of using their "bootstraps" either, because in this sense, they might not have had boots to begin with). Now my family finds itself at an interesting crossroads. Generations are shifting, and for the first time, we have an opportunity to develop systems of wealth and access that did not exist. A special type of pressure rises to the surface. I call it provider pressure.

Will I be good enough? How can I raise the bar? What happens if I don't live up to everyone's expectations? A couple weeks ago, I got an incredible opportunity at work. I'd be one of two people to ever hold this specific job, and the access to senior leadership and influential people would be unprecedented. From a purely pragmatic standpoint, it's exactly the kind of role that would allow me to open a lot of doors for a bunch of people
But that's not what I focused on
I froze up. Paralyzed by being selected for this role instead of my peers. There aren't a lack of opportunities for us anymore. When you believe there's a drought, you see opportunities as a zero-sum game. But perspective opens doors you didn't think existed. The choice for us isn't between having an opportunity or not having one: it's the choice between ones that are equally great
If I don't take this one, I may never have another. That desperation can produce incredible results, but it's not necessarily sustainable. What I've come to realize, is that the opposite is true, and revolutionary: There is an overabundance of opportunities, and the choices for us isn't about whether or not we will ever have another one. It's which one should I pursue, when I'm faced with great ones. That reality has been more frightening personally than not having any options. It forced me to realize that I'm good enough to be exactly where I am
Success might mean you sign the back of a check every month. Legacy means you don't sign, because your name is printed on the front. I'm much more interested in the latter
So I got over my self, kicked my insecurities in the face, and took a job that scares me.  I'm unsure of what will happen next, but that's the point of faith. You aren't supposed to know. Instead you cling to what you know to be true, and fight through the rest

I've had to learn that I don't have to apologize for not abiding to the narrative specific people have for me. In fact, I can't afford to dignify it with any type of energy or response
Some of us are burdened by what happens when dreams actually do come true. When you finally get the chance to envision what only existed in your mind and the opportunity is right in front of you, and the decision is no longer "if": it becomes when
Yet we hide from it. Impostor Syndrome gets discussed quietly in coffee shops, apartments, and the hallways of professional conferences. No amount of fake deep Instagram posts can fix this either. It drives to the core of a very systemic problem; a lot of us have never been here before. But we grin and bear it. We get promoted, make more money, build businesses, and create ideas into tangible things. Yet, the feelings of inadequacy often travel from success to success, sometimes faster than we do 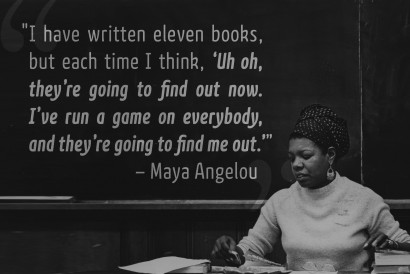 That's why history matters so much, and stories are still the best way to teach (or destroy) things. Being twice as good has a pretty steep toll price, especially if you aren't crystal clear on what you're working for, or why. It's ok to be scared, it just doesn't benefit anyone to live that way. We are allowed to make mistakes. Fail. Not do as well as we thought. The burden often lies in the perception, that has real life consequences for us, and not other people
That's also why we can't stop in our various pursuits
I want this to get right-clicked, saved to Pocket, shared on Facebook, then placed in the umpteen GroupMes you're a part of. I believe this is valuable, otherwise, there is no point in my writing, editing, revising, or publishing. You should feel the same about whatever you're doing.  You also shouldn't apologize for the pursuit of greatness, or the sacrifices that happen when you begin striving for it. I'm willing to continually to do the unscalable so the people around me can achieve the unthinkable. That doesn't make me an impostor. It makes me a dreamchaser