For Nina: Why Zoe Saldana can catch ALL of this shade

No, I'm not going to let Nina Simone go out like this. I hope you won't either. On the heels of our community protesting the lack of inclusion at a predominately-white awards show such as the Oscars, is the release of the trailer for the controversial biopic about Nina Simone. Let's be real. Zoe should have taken the hint when she was first announced as the lead for the film. While the rest of us ranted on social media about how inappropriate a casting this was and who would play the part more accurately (nods to India Arie and Viola Davis), Nina Simone's daughter came out and said that the project was unauthorized and that the estate wasn't even consulted or asked to participate in the making of the film 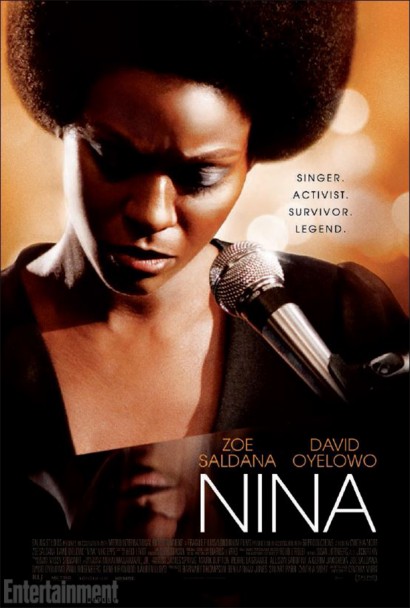 Photo: Entertainment Weekly I could sit here and blame Hollywood for how it constantly and ridiculously practices the erasure of black folks when documenting history via cinema. Yes, Hollywood is a mess and we all know it. We will continue to call that culture out every time we see it. When are we going to start holding actors and actresses accountable for their culpability in Hollywood's legacy of racism? Gods of Egypt has flopped. Great. I highly doubt that Joseph Fiennes will find success trying to play Michael Jackson. Now it's time to show Zoe and anyone else who would step into a space that isn't befitting for them that not only will we boycott Hollywood for trying to shade (or lighten) our history... we will boycott YOU
Zoe, how can you call yourself a Nina Simone fan and allow yourself to be essentially put n blackface to portray her? Nina once said, "I've never changed. I've never changed my hair. I've never changed my color, I have always been proud of myself, and my fans are proud of me for remaining the way I've always been." To so fundamentally disregard what the artist you're trying to authentically illuminate stood for disrespects her legacy and disregards her voice. So, Zoe, you can take severals seats, catch infinite shade, and know that I will stand up for Nina Simone. I will hear her voice. I won't ask her to change
Watch Nina's own words on black beauty below: [embed]https://youtu.be/c3ClwX7oyXk[/embed]

What do you think about the Nina trailer? Will you go and see the film?

READ NEXT: Why we wear our crowns: Nina Simone