Being a black woman and loving hip-hop can often feel like a contradiction. As one of my friends thoughtfully explained, enjoying rap music often means taking ourselves — our identities — out of the equation while we try to experience the lyrics as if we are the black men who wrote them. Undergoing this transformation makes it easier to swallow all of the “bitches” and “hoes” and “she could have a Grammy, I still treat her ass like a nominee” that permeate so much of the music we love. That's why, when a black female artist enters the scene and combines the aspects of the culture we live for — the sound, the melody, the community —with lyrics and stories that speak to our identity, we find so much joy. It’s why I’m a fan of Noname Gypsy. Noname is a 23-year-old artist from Chicago who has developed alongside artists like Chance the Rapper, Vic Mensa and Mick Jenkins — members of what she calls “Chicago’s hip-hop renaissance.” She is a rapper, whose lyrics are more poetry than punchlines, more thought than thot. For example, in “Sunday Morning,” Noname translates a knock-knock joke into a commentary on the fallacy that is the American government. She uses the comedic tool to skillfully explain how poverty and useless police lead to disenchantment and resignation within communities. She raps,

“Poverty was made to door frame all the violence/Knock knock, guess who’s not there?...The police/And guess who don’t care?...The people.”

But even more special than her commentary on social issues is her ability to express the many dimensions of her personality. Something about Noname just feels universal. She is able to be so many different things all at once, like all humans are, and displays the vastness of her humanity on every track. For example, in “Hold Me Up,” Noname delivers a range of emotions: the vulnerable, the shallow and the egotistical. Throughout that song, she goes from “My confessional, handwriting regrettable, illegible/somebody help me right my wrongs” to “On my soul, when I get my check, Imma get a chain.” She refuses to sacrifice introspection for braggadocio, or vice versa; instead, she simply alternates between the two. What I find most valuable about Noname's complexity is how she uses it to detail life and love through the lens of black womanhood. So many of her songs sound like the same conversations I have with my friends. In “Baby,” Noname describes the qualities she looks for in a man, asking for the kind of guy that would admire her ass, but love her for her mind. In “Dizzy,” she jokes, “Got a call from Kadija/How you living girl, single,” a line that is essentially the motto for my group of girlfriends 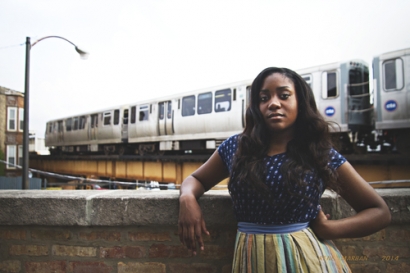 Photo: nonamegypsy.com Separate from romance, Noname also touches on the pressures of simply wanting to be your full self as a black woman. She talks about how, as a “female rapper,” she is often questioned and criticized for talking about the difficulties of life. “You a female rapper/Don’t rap about that shit/You supposed to be a bad bitch/Or at least a little confident,” she explains in “Samaritan.” Though she is confronting the trope of the worry-free, aggressive black woman within the context of her own experience in the music industry, the reference is just as relevant to life in general for black woman. We are expected to be powerful, independent and strong — a double bind that makes  our vulnerability look like weakness while our anticipated strength negates societal concepts of womanhood. Noname’s music speaks to this part of black womanhood, which most of hip-hop, both the music and the culture, seems to ignore. And, she does all of this with a charismatic performance style that makes it impossible not to want to support her. When I saw her perform this summer at the Soul of BK concert in Brooklyn, she graced the stage with a huge smile, as if there was no other place she’d rather be. At one point, she messed up one of her verses, stopped the music and said something like, ”I’m an artist and so I’m sensitive about my sh*t. I have to get it right. I want y'all to hear me.” Then, she did the verse again, acapella. Simply put, she makes her drive and determination palpable. While watching her rap, it's clear how much she wants her words to touch the people and how much fun she has doing just that
Basically, if you love rap, you’ll love her. And if you’re a black woman, you’ll appreciate her art even more. So check out her Soundcloud and website, and stay tuned for her wildly anticipated mixtape, Telefone.

What's your favorite Noname Gypsy song? Let us know in the comments below.