Hundreds of peaceful protesters took to the streets over the weekend demanding police transparency in the officer-involved shooting death of a Chicago teen. Paul O'Neal was killed on July 28th. Body camera and police dash cam footage were released for the first time on last Friday
None of the nine videos actually showed the moment O'Neal was shot
The department's police superintendent said in a news conference on Saturday that the officer responsible for O'Neal's death did not have his body camera turned on. Chicago Superintendent Eddie Johnson attributed this to officers only having the devices for about a week and had not fully mastered them
"They had had those cameras maybe about a week. ... There's going to be a learning curve," Johnson said
An officer can be heard in one video saying, "Get down! Hands behind your back! You shot at us, mother------!", although police say no weapons were found on O'Neal
Investigators say the 18-year-old led police on a chase in a Jaguar that was reported stolen. Footage from the scene showed officers firing at the car. The family's attorney calls the treatment of O'Neal by officers "street justice"
"I was concerned by some of the things that I saw on the videos and that's why we took such a swift action ... that we did last week to relieve the three officers of their police powers," Johnson said, noting that he could not elaborate on which actions specifically concerned him
The department has not released the name of the officers. O'Neal's family filed a federal civil right's lawsuit against Chicago PD and the three officers
Ja'Mal Green, an activist at a local rally Saturday told the crowd, "If this is brand new equipment, how come the other officers knew to turn their cameras on and the officer who shot the fatal shot failed to turn his on or it got mysteriously turned off?" The video comes following an updated department policy calling for footage to be released to the public within 60 days. The update stems from the 2014 fatal shooting of Chicago teen Laquan McDonald, after an officer shot him 16 times
The department's use of deadly force policy was revised in February 2015 prohibiting officers from "firing at or into a moving vehicle when the vehicle is the only force used against the sworn member or another person". The policy also states that officers "will not unreasonably endanger themselves or another person to conform to the restrictions of this directive." The Chicago protest Saturday for O'Neal also marked the 50th anniversary of Martin Luther King Jr.'s march in the same neighborhood to denounce housing segregation

Another protest took place on Sunday.

March is underway, down Michigan. Looks like police blocked off the street for them. pic.twitter.com/z1sEk82mP4 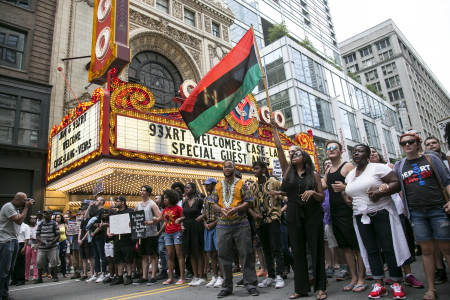 Hear more from the family.

Never miss a headline. Sign up for Blavity's daily newsletter.