In honor of Women’s History Month, we will be celebrating our favorite heroines and villains, starting with Ms. Misty Knight. This is a space in which I often preach about representation for PoC and women in an industry that is predominantly run by white men. Because of the importance of this month for Black women and the necessity that they be seen, heard, and uplifted in comic books, film, and television, it is a personal honor to me that my Blavity fam, Joi, is taking over the column to tell you about this Black woman hero, and what she means to her. – Ira

Who is Misty Knight?

Misty Knight, born Mercedes Knight, is a former NY police officer turned private investigator, bounty hunter and Hero for Hire. She first appears in 1972’s Marvel Team-Up #1 as an unnamed woman and is mentioned by name in 1975’s Marvel Premiere #20. It isn’t until Marvel Premiere #21 that the Misty Knight that we know and love appears, attacking Iron Fist in Colleen Wing’s (her father) home. Misty’s depiction, created by Tony Isabella and Arvell Jones, was a result of inspiration from the blaxploitation craze of the 1970s. Her flawless fro has been and still is her signature hairstyle. 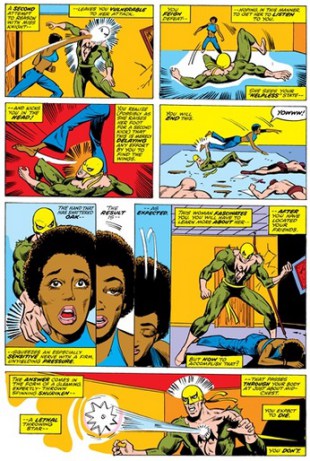 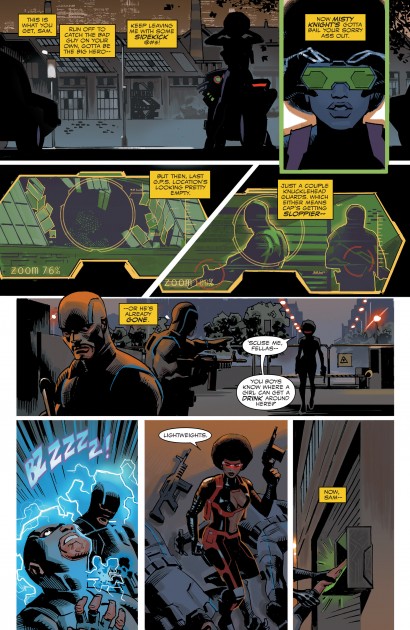 What makes her super?

Misty is a skilled martial artist, marksman, and fighter. One of her distinctive features is her genetically enhanced bionic arm, created by Tony Stark himself. But what truly makes Misty so special is her quick thinking, strong will and her inability to back down from a challenge. Misty’s ability to maneuver around the superhero circle has always been a key strength of hers. Whether she is bounty-hunting with her fellow Daughter of The Dragon (and best friend) Colleen Wing, aiding in cases with Heroes for Hire founders Luke Cage and Iron Fist or leading her own Heroes for Hire team for Iron Man during the Civil War-era, Misty has been on the ground doing the work. Despite playing support for majority of her time on the comic book pages, she stands iconic as one of the first Black female superheroes to grace the pages at Marvel comics.

Where is she now?

Misty can be in found in the Captain America: Sam Wilson comic book series, providing #blackgirlmagic and #blackgirlbadassery every time she is on the page. Misty will also be making her on-screen debut in Netflix’s Luge Cage and will be played by Simone Missick. If all goes well with Luke’s series, could we be looking at a Misty-led Netflix series within the next few years? Only time will tell, but we will be crossing our (bionic) fingers until then.

It was only a few years ago that I learned about Misty Knight. I feel ashamed to say this now that nerdom has been popularized and really permeates through Black culture. But, in hindsight Storm is the only Black female superhero who gets “top-billing” status in the minds of the general comic fan. My research on Misty was inspired by my epiphany that I clung so hard to Storm and tried to make her my go-to for anything comic book related. It was time for me to not make Storm my token. It was time to learn the stories of other Black female superheroes (big or small) and find myself in as many characters as I could. Thus began my research.

What I love most about Misty is her consistency throughout her comic history. This can be due to any number of reasons: playing mostly support, few lead comic opportunities, usually known as a “B-Level” superhero. But from her characterization to her appearance, Misty has not changed since the 70s.

Now some may believe that this is a bad thing, especially due to the background of her origin inspiration. Misty is clearly a character created with blaxploitation films in mind. She is Pam Greer if Foxy had a bionic arm. But with keeping that look, I have concluded that her importance in the comics world is her stance of defiance.

Her fro has not diminished. Her suit is still as sexy as it has been. There is a reliability to her that no matter what era or what time, Misty will always be Misty. And that’s bold, considering that the usual Black heroes have an origin story seeped in stereotypes that were prominent in the era that it was created in — Misty included. She has superseded these stereotypes and they’ve formed into her identity, without being dated. And within that identity there is an underlying pride that I feel when I see her in the comics. I see someone who is often under-estimated but still excels despite that. But above all, I see someone excelling while simultaneously being unapologetically herself.

I believe that is the core of Misty Knight — large comic presence or not. This is what resonates with me the most. This is what I hope to grow into in my professional career, particularly. I’ve heard the HR phrase “bringing your whole self to work everyday” too many times to count. But the pessimist in me has told me that this is not realistic. That my “whole self” won’t help me achieve the career I want. Underneath that pessimist is the optimist, however. She is smaller but she is growing daily. The optimist in me has been encouraging, telling me to work on finding what parts of my personality or my blackness I will not hide for the sake of a career. From how bright I like to wear some of my clothes to wearing my fro to work when it’s time to take a break from my protective styles. This has been a steady work-in-progress but I have found myself happier than I’ve been in my professional life.

Researching Misty has led to me diving more into the Black female superhero and villain world. I’ve gathered that my knowledge of these ladies is sorely lacking. But I eagerly tackle the task to learn as much as I can about these women.

READ NEXT: Trouble sleeping? Here are some tips that don’t include counting sheep