Soccer has a diversity problem in the U.S. — here's why

If you are a soccer fan like me you probably watched the U.S. Women’s Soccer Team dominate Japan last night and win the World Cup.

I couldn’t help but notice, however, that the starting lineup for the U.S. Women’s team is seriously lacking diversity. 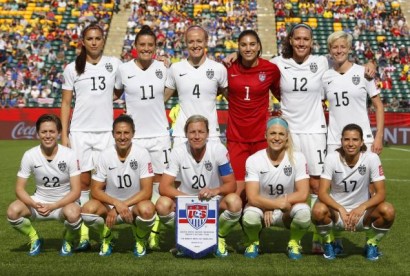 So what’s up with the lack of Black people and Latinos in U.S. Soccer?

1. Playing and training for the sport are both expensive.

Segregation among neighborhoods and schools is still an overwhelingly common occurrence in this country. And as a result of this segregation and institutionalized racism, black and latino families often earn less income than their white counterparts.

Also, predominately white neighborhoods tend to have more resources and community recreational facilities and programs. Therefore, if you live in a predominately white suburb, you are more likely to have access to well-kept soccer fields and great, competitive soccer programs.

So basically, when it comes to finding great soccer programs, white suburbia is where it’s at.

But it’s not just about living in a white neighborhood. Considering the fact that black and latino households on average have to have higher incomes to live in affluent neighborhoods — even among the middle to upper class — these financial obligations only prevent minorities from joining soccer clubs that can mold kids into future professional players.

In an article from New America Media,  Andrés Tapia recounts her experiences with soccer and the financial requirements that prevent kids from less privileged families from participating in top-notch soccer teams.

“The barriers to entry in the more competitive youth travel soccer leagues are even higher, given the $1,000 fees and faraway road games that assume parents have cars and free weekends to schlep their cleat-clad kids. “

The sad part is that even if you do find the money for these programs, if you can’t afford to go to college, playing professionally can be pretty much out of the question.

Some might argue that kids from inner-city or poorer communities probably don’t even want to play soccer; that soccer is a white suburban sport and kids that don’t fall into those categories are more likely to be into basketball. But why should we write these kids off as being disinterested in the game?

Only a few initiatives have taken place that reach out to inner-city kids and provide them with soccer teams. And these programs are often not as advanced as those provided in white suburbs. Therefore, any diversity-seeking programs can be ineffective.

Will U.S. Soccer teams ever be racially and ethnically diverse?

There are things the team diversity task force can’t fix. The U.S. Women’s team’s lack of diversity is a reflection of our country’s racial socioeconomic divide. We rarely see blacks and latinos rise to national teams because on average we lack the money and resources we need to get near a professional level. However, if the U.S. makes a better effort with outreach programs, things could improve.