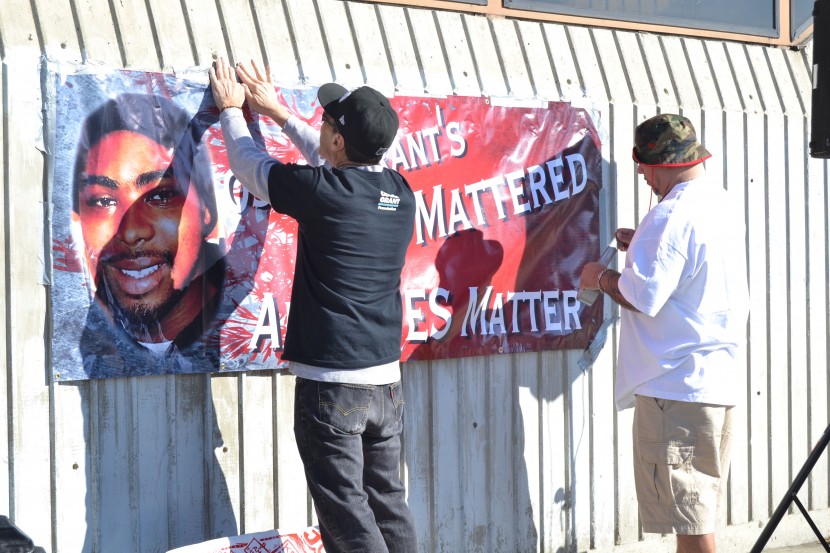 Members of The Oscar Grant Foundation attach the banner to the station wall before the start of the 7th Annual Vigil at Fruitvale BART Station in Oakland, CA. Photo courtesy of Ashley Nash

However, for the last seven years, hundreds have put aside their New Year's celebrations to take action by gathering at the Fruitvale BART Station in remembrance of Oscar Grant. 22-year-old Grant was shot and killed by former BART Police Officer Johannes Mehserle on January 1, 2009. This year, BART Police Chief Kenton Rainey was one of many speakers to address how desperately the relationship between law enforcement and the community needs to be strengthened. Chief Rainey also went on to state that the altercation preceding Oscar Grant’s death was the first to be filmed and uploaded onto the web, causing outrage and tragically setting the stage for police killings to come. 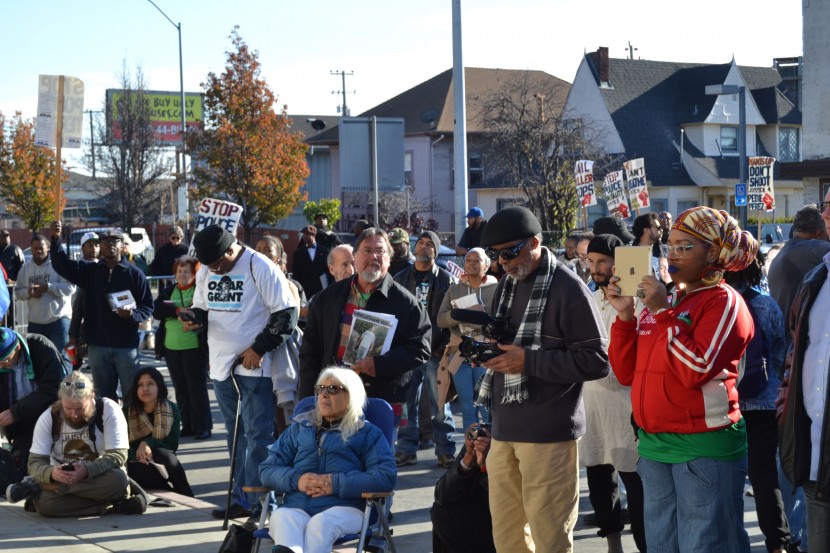 Close to 300 unarmed black men were shot and killed by U.S. Police in 2015 according to The Guardian. A recent demonstration occurred on December 29, 2015 when protestors marched in Cleveland after a grand jury declined charging Officer Timothy Loehmann who shot and killed 12-year-old Tamir Rice. Multiple videos surfaced showing Rice playing with a toy gun and then being approached by the police. Despite the proof that thousands of videos continue to provide, black men are still being killed at an alarming rate.

At the 7th Annual Oscar Grant Vigil, Grant’s mother, Reverend Wanda Johnson said, “One of the things we know is necessary for us, the foundation, to do is to work together with the police to bring forward our feelings, visions and goals to help them learn how to police better.” Johnson invited fellow families onto the stage who have also lost loved ones to police violence, encouraging them to share their stories as well. Mothers, fathers, daughters and sons gathered with photos and posters in hand, moving the crowd with gruesome stories that were uncomfortably similar. In response, during the seconds between speakers, members of the crowd chanted “no justice, no peace” charging their signs towards the sky. 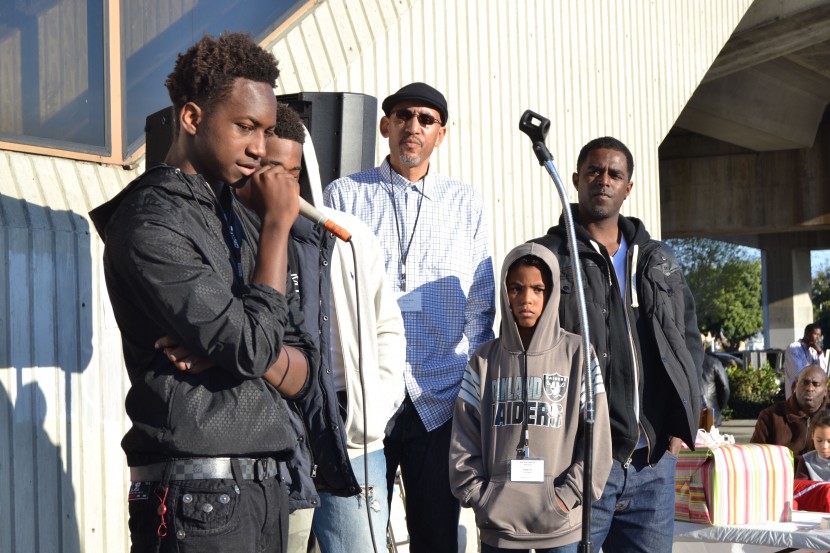 OG (Oscar Grant) Ballers discuss the meaning behind their name of the success of their team. Photo courtesy of Ashley Nash

Speakers included family members and leaders of organizations inspired by Grant’s life and unjustified murder. The coach and players of the Oscar Grant Ballers team went before the crowd to talk about how forming the community basketball team has helped them to honor Grant’s memory. Similarly, The Black Sheroes of the Young Gifted and Black organisation performed several original rap selections addressing the significance of social justice involvement while highlighting the impact of Grant’s murder. In a spoken word piece, a Black Sheroe described the moment when she discovered being black was a burden. “In mid-sixth grade, I saw my first black execution on tape. Oscar Grant was face down on the pavement, camera phones and shocked faces in this Oakland train station. Before then, being black was a burden facing backward as a reminder of the past...” Each young adult demonstrated passion for leadership and change, emphasizing in their speeches and condolences that despite the ongoing efforts of others to silence them, their voices can't be muted.

As organizations have developed to target the killings of black men across the country, tactics by which these goals are achieved have changed over the years. The demonstrations and communication methods from the Civil Rights Era have transformed into sharing posts, searching hashtags and uploading videos. During the vigil, signs were posted and announcements were made instructing participants to share their images and footage by tagging the posts with #oscargrant and #theoscargrantfoundation. Connected to these hashtags are images and videos of vigils, marches, and commemorative artistry dedicated to Grant and his family. 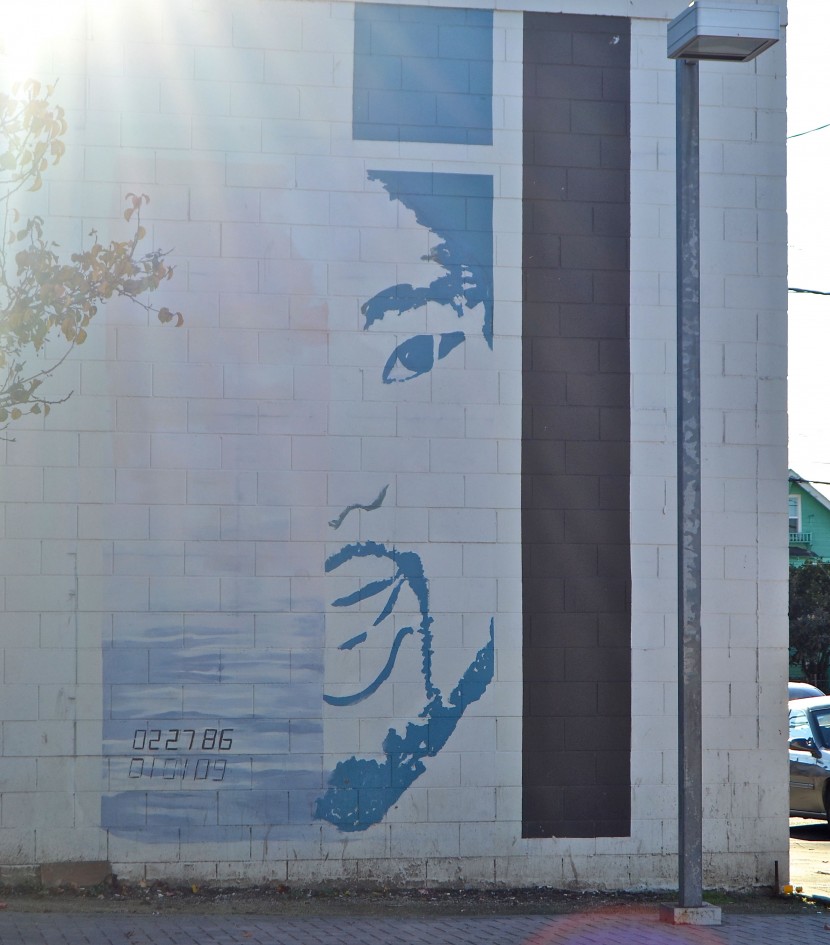 A mural and graffiti art dedicated to Oscar Grant across the street from Fruitvale BART Station. Photo courtesy of Ashley Nash 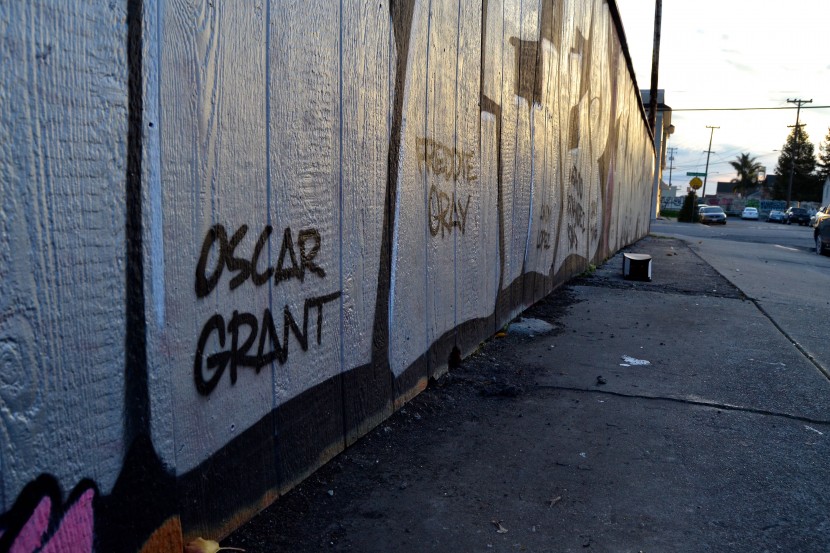 A mural and graffiti art dedicated to Oscar Grant across the street from Fruitvale BART Station. Photo courtesy of Ashley Nash

The Oscar Grant Foundation Board of Directors and CEO Reverend Johnson continue to “uphold the legacy of Oscar Grant III, by being a resource for at-risk youth of all races who wish to turn their lives around in a positive way.” Reverend Johnson also leads the Healing Hurting Hearts support group where she and other families who have lost loved ones can connect. When asked how she felt about the annual vigils and the outpouring of participation from members of the community she said, “ It continues to let me know and show other people that Oscar was a loving, caring person who was there to help others. So, to see people come out, share their stories and celebrate Oscar’s life with us, it means the world to me.”

Grant’s memory is not only maintained by his family and The Oscar Grant Foundation, but by artists throughout the world. One of many murals dedicated to Grant can be found directly across the street from the Frutivale BART Station. Filmmaker Ryan Coogler debuted his first feature film Fruitvale Station in 2013, stating in an interview, “I felt like I had to tell his story so something similar wouldn’t happen again.” Although social media sites have helped users to spread the word, it's still unknown whether the platforms have increased the rate at which people get involved outside of sharing posts. 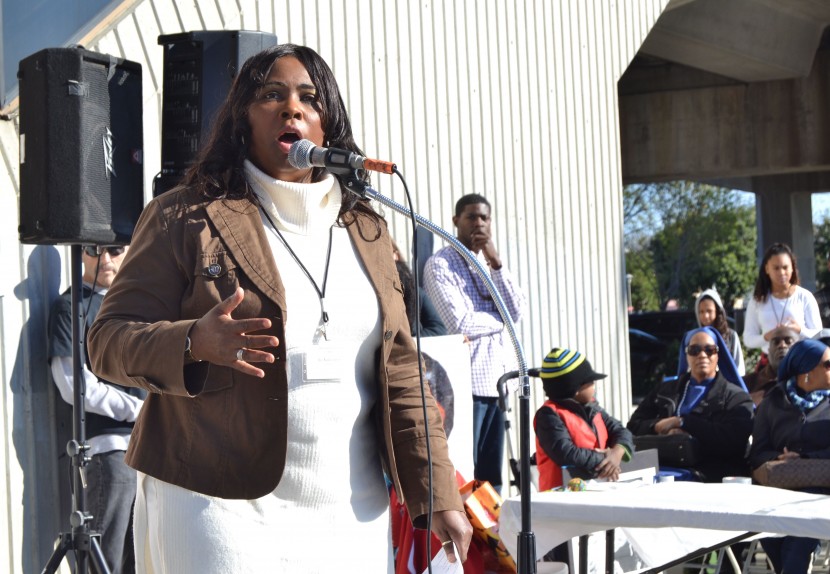 BART Police Chief Rainey said that because of the viral videos of the Oscar Grant shooting Officer Mehserle was reprimanded, charged with involuntary manslaughter and served almost a year in prison. It has been expressed by rally participants and via social media that the time Mehserle served was not enough. The same dissatisfaction has been expressed in regards to the most recent killings and how they were resolved.

Despite what has become a mutual feeling amongst community leaders and movement members, the mission is still in motion. American writer Walter Anderson once said, “ I can choose to sit in perpetual sadness, immobilized by the gravity of my loss, or I can choose to rise from the pain and treasure the most precious gift I have – life itself.” Rev. Johnson and the foundation continue to embody this quote while in their pursuit of justice and change. Johnson affirmed, “I’m going to continue to blow the trumpet about Oscar every place that my foot treads on.”