Thoughts on Creating Safe Spaces on Twitter and Freedom of Speech 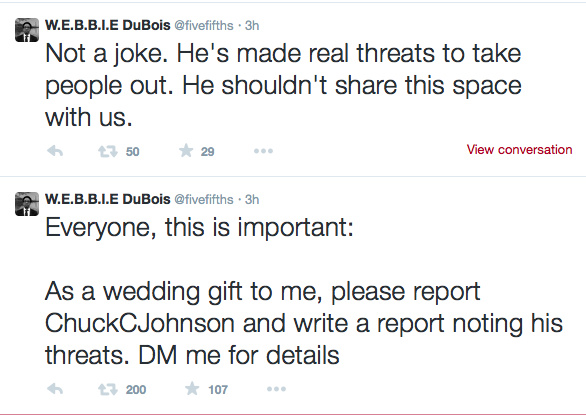 This morning on Twitter, news spread that Chuck C. Johnson (@ChuckCJohnson) was using twitter in order to solicit donations from those who “want to give money to taking out” educator and activist, Deray McKesson (@deray), who has been one of our major leaders in the current fight for racial justice against police brutality, beginning with his work in Ferguson with fellow activist, Johnetta Elzie.

But we’re not talking about a dinner date or a small threat to remove someone off of a metaphorical pedestal. Johnson goes on to say that “with the right amount of $ I can hunt down anyone.”

We live in a country where free speech is a guaranteed right for all.

Free speech has been at the heart of many of our civil rights movements in hopes of holding our nation accountable to its founding principles. It’s important that we use the lessons of yesterday to build, create and imagine a better and more democratic world tomorrow.

However, this cannot come at the expense of the lives of our fellow human beings. It is the point of view that some people are less worthy of life than others, that we find ourselves continuing the fight for justice today, a fight that Deray’s voice has helped to amplify.

We cannot treat this as an idle threat. This was a threat to Deray’s life, one that cannot be tolerated, under the guise of free speech. Johnson’s tweets are in direct violation of Twitter’s usage policy, which prohibits “threats of violence against others or promote[s] violence against others.” Furthermore, plotting to kill someone is a crime.

We hope that, unlike times past, this will be permanent.

Twitter, like other forms of social media, is an amazing tool for organizing and communicating amongst ourselves across the globe. While we may have different views and different stories to tell, we need to make sure we can each express our ideas by working diligently to ensure this remains a truly safe space for everyone. Continue to be on the look out for your fellow Twitter siblings, and hold yourself and others accountable for when someone is being harassed or threatened.

We all have our part to play in building a better tomorrow. That’s why we need to make sure we protect each other so we all make it through today.