The Consequences of Attacking Our Little Black Girls.

It seems like every time we turn around, people are coming for us. And not those of us who have reached a certain age and are hardened by life, but some of the youngest in our family. Little Black girls have been under attack left, right and center the past few years, and it seems like there’s no end in sight. There is an underlying (but sometimes overwhelming) theory that Black girls (and therefore Black women) aren’t allowed to express themselves like everyone else. Or flourish. Or even just live.

In 2012, the world was abuzz over The Hunger Games transitioning from book to the big screen. It was a box-office smash and most who had read the books felt the screenplay and casting was done well. Except in the case of the character Rue, played by Amandla Stenberg. There’s a whole Tumblr site devoted to the very loud and very racial backlash against the casting. Despite the character being described in the book as follows: “…And most hauntingly, a 12-year-old girl from District 11. She has dark brown skin and eyes, but other than that’s she’s very like Prim in size and demeanor…” But it’s just a movie, right? 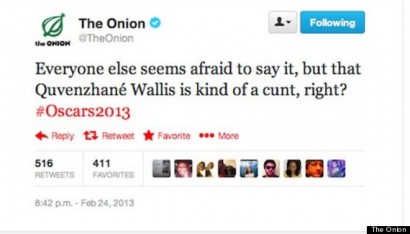 In 2013 the world was learning how to spell and say Quvenzhané Wallis. She was supposed to be basking in the glow of being the youngest person to be nominated for an Academy Award. Instead a satirical paper called The Onion called her one of the most vulgar words in the English language. But it was in jest and it was satire — why can’t people take a joke?

In 2014, Quvenzhané had to once again rise above the vitriol being thrown her way when the remake of Annie was released. A beloved movie made about a red, curly-haired little orphan (which, if people looked deeper, was true to form because in a certain era red-heads weren’t celebrated as unique and different as they are today and were the last to be adopted. The same holds true for little Black children today, so the parallels run true to real life). But this isn’t real life, how dare they remake Annie with a little black girl?

Early this year, Zendaya hit the red carpet for the Oscars in a beautiful dress and long locs. In typical Fashion Police style, Giuliana Rancic quipped: “I feel that she smells like patchouli oil, or weed.” Zendaya released a very composed but pointed statement the next day. Her response was far more mature than her elder that made the statement. But had she chosen to clapback, she would have been in the wrong, right? 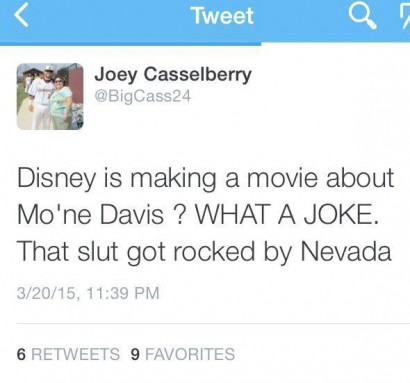 And now this week. Disney announced that they will be making a movie about Little League star and shoe designer Mo’Ne Davis. Many seem to have a problem with #blackgirlmagic and one person in particular used a derogatory term to describe her.

In #BlackTwitter superhero-steez, he was swiftly removed from his sports team. Mo’Ne issued a statement asking for him to be reinstated to which the school politely declined. But it could’ve been worse, he didn’t call her a n*gger, right?

Each of the young ladies have had to address people much older and allegedly wiser than they are. Some whom have only been alive for under a decade. Their responses are poised beyond their years. But why? All to avoid being the angry black woman.

This is one of the key burdens that black women face on a regular basis. We have to keep the peace, bite our tongues — just so that we can be seen and heard as humans. We learn how to fight back the tears from an early age, while sitting on the floor between our mamas/aunties knees getting our hair done. And it follows us throughout life.

We aren’t free to express our hurt. Our pain. Our anger. When we do, we are the evil ones and the wrongdoers. No matter the field or the age, we get slapped but are always told to turn the other cheek as the assaulter gets to move on with nary a slap on the wrist.

We also do it to our own. Our emotions are used against us by our own as a reason to date interracially. We have hashtags, memes and entire websites encouraging the very actions we say we abhor. We praise little toddlers for twerking and then admonish them for being too grown once they outgrow diapers.

When will there be a space for our daughters, nieces and little sisters to just be? Why aren’t they seen as being as innocent as their counterparts? Why must they be burdened by adult hate and expectations? By people that should know better – and do better?

We need to do better. Racists are always gon’ racist, but we should at the very least start holding ourselves to a higher standard. This myth of the strong Black woman needs to be shattered because it starts with breaking down the innocence of the little Black girl.

To emote is to be human. To cry. To be angry. To be hurt. To feel joy. We need to let our girls be girls and not force them into politician-type of roles. To appease, soothe the feelings of others, while still soaking their wounds. 9-year-olds shouldn’t be called c*nts. A young lady shouldn’t be told she smells like weed. A rising superstar shouldn’t be called a slut. No one person should be responsible for the dulling of spirits and the purity of a child or young person.

If you make it to adulthood, you will spend more of your life as adult than as a child. Childhood should be a time of naiveté and exploration. All children — boys, girls, Black and White should be able to live a life free of shame, bullying and burdens for as long as they can. The world will show them otherwise soon enough.