Why is the Department of Homeland Security monitoring Black Lives Matter activists?

On Tuesday, news surfaced that the Department of Homeland Security (DHS) has been monitoring the Twitter account of one of the Black Lives Matter movement’s most prominent activists, Deray McKesson. According to Vice News’ Jason Leopold, who acquired the information through a Freedom of Information Act (FOIA) request, there is evidence that McKesson was being actively surveilled by the government during the Baltimore protests

https://twitter.com/deray/status/631110978944372736 Unfortunately, this is not the first time we have received word that Black Lives Matter protestors are being treated as enemies rather than members of the state. Only last week, Mother Jones reported that according to a “crisis management” report by cybersecurity firm ZeroFox, McKesson and fellow activist Johnetta “Netta” Elzie, had been identified as “threat actors” in Baltimore. Similarly, at the end of last month, documents made available by the DHS’ Office of Operations and Coordination noted that activities associated with Black Lives Matter movement, from social media to protests to vigils in cities such as Baltimore, D.C. and New York, were under governmental eye
The United States is a country that was built on the righteous belief in the necessity of civil disobedience in the face of systemic injustice. And over the past year, millions of people like McKesson, have taken to Twitter and to the streets for redress of the institutional degradation and dehumanization of black lives. But rather than being met as torch bearers for a national legacy, Black Lives Matter protestors are being chastised and codified as combatants
These circumstances demand an answer to a very simple question: Why? The current DHS surveillance strategy fits within a broader history of domestic surveillance of social movements, including the civil rights movement in the 1960s. In 1975, through the Church Commissions hearings, we were given our first glimpse into both the governmental intelligence capabilities and its abuses of power. During his tenure as the Director of the Federal Bureau of Investigation (FBI), J. Edgar Hoover notoriously monitored the activities of Dr. Martin Luther King, Jr. and the Black Panthers through COINTELPRO (COunter INTELigenece PROgram). Within a year of forming the Southern Christian Leadership Council (SCLC) in 1957, King had his own personal FBI file, and, through his continued work in the Civil Rights Movement, was subjected to extensive wiretapping and even blackmailed into committing suicide, which he did not do. And by September 1968, almost two years after its formation in Oakland, the Black Panther Party would be called by Hoover “the most dangerous threat to the internal security of the country.” 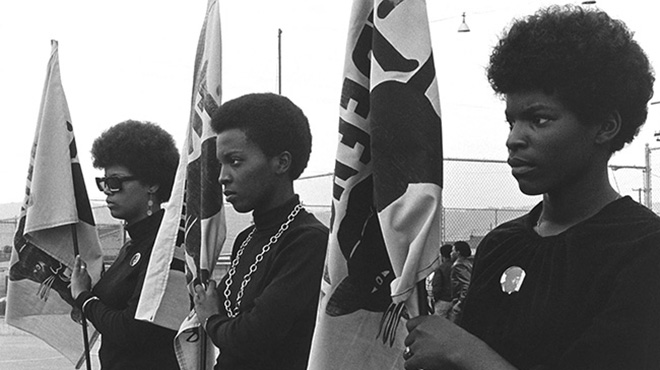 History, in hindsight, has demonstrated the invaluable contributions of both King and the Black Panthers, and other pivotal figures in the black freedom struggle of the mid-twentieth century. This includes the similarities between the launch of the National School Breakfast program in 1975 and BPP’s Free Breakfast Program, and the erection of an MLK memorial in D.C. in 2011. Though threats at the time, their work has proven instrumental to holding the country accountable to the ideals on which it was founded
However, as the government finds itself repeating its own history in a post-9/11 America, is it enough to believe contemporary fighters for justice in the new millennium will, like those before them, receive future vindication? The DHS was created after the terrorists attacks of September 11th with the mission “to ensure a homeland that is safe, secure and resilient against terrorism and other hazards.” Yet we have seen them mishandle their duties before. Ten years ago in the final week of August 2005, Hurricane Katrina devastated the Gulf Coast, leaving an indelible mark on cities such as New Orleans. The hurricane stands as one of top five deadliest hurricanes in  U.S. history. But as we remember the winds, the levies breaking and the floods that followed, we also remember how the Bush Administration and organizations such as DHS unnecessarily prolonged actions to assist the victims
At the time, we had neither the vocabulary nor the technology to say, "black lives matter," but Kanye West's now infamous outburst on live TV was one of our generations initial articulations that, based on the government's indifference, they didn't
[embed]https://www.youtube.com/watch?v=zIUzLpO1kxI[/embed] Has the attitude changed? Why are not the same surveillance techniques and resources used to track Black Lives Matter protestors being invested in monitoring the group identified as the biggest terror threat to the United States: white extremists? https://twitter.com/deray/status/631152880116891648 Imagine if the DHS had put the same effort they are using to track McKesson into monitoring the workings of Dylann Roof, the 21-year-old millennial white supremacist who killed nine black parishioners in Charleston? Roof expounded his racist ideological framework in online blog posts and told friends of his intentions to start a race war
Nonetheless, there is little indication that Roof was anywhere on the government’s radar, and much to suggest that more energy was being expended figuring out how this instagram post was a threat to the nation's stability
https://instagram.com/p/4w1-S5lOS-/?taken-by=iamderay And so again the question remains to be asked: why? Based on the logic of the movement and stated mission of the DHS, the two should not be as opposed as DHS surveillance suggests. The only way to ensure and actualize a world where all black lives truly matter is to dismantle the institutions that have been birthed in and through white supremacy. If the biggest threat then to national security is white supremacist extremism, why are activists like McKesson, who continually fight it by exercising their first amendment right, being criminalized? While the answer remains to be stated explicitly, it is difficult not to find the DHS' use of surveillance against Black Lives Matter activists to be a radical and dangerous intimidation technique. One that appears arbitrary and whose subjective implementation has the potential to undermine the very foundations of the country the agency was created to protect