Portraying Mrs. Obama at any stage of her life is an amazing idea!

Former first lady Michelle Obama may not be in the White House anymore, but she continues to inspire young girls.

Ella-Lorraine Brown — named after singer Ella Fitzgerald — knows greatness when she sees it. The 8-year-old wanted to dress up like Obama for her school's Cultural Heroes Day, reports Makers.

Obama, of course, spent eight years on the world stage alongside her husband as the first Black first lady. Ella-Lorraine, however, chose to portray her hero before entering politics. Photos of the girl dressed in a denim jacket, red sweater and a white dress shirt went viral Friday, copying Obama's style as a Princeton University freshman. 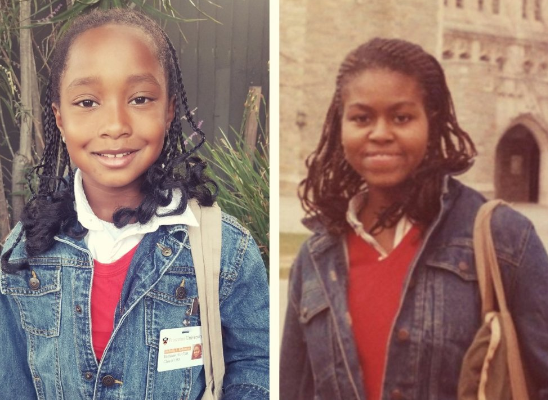 “She was really in awe of the idea that with hard work you could become anything,” her mother and Princeton alum, Karlyn Johnson Brown, told Makers.

For Ella-Lorraine, celebrating Obama's achievements as a college student was important. She wanted to show that women can achieve anything without being attached to a spouse.

This isn't the first time the young girl paid tribute to inspirational Black women. In the past, she has dressed up as famous pilot Bessie Coleman and civil rights icon Ruby Bridges, who was instrumental in ending segregation in the South.

Ella-Lorraine loves to dress up as her female heroes, like Bessie Coleman and Ruby Bridges. "She knows that folks came before her that allowed her to be where and who she is today and we’ve encouraged her to not back away from embracing that history.” pic.twitter.com/gVv1TauA8r

Obama has been in the news lately because of the release of her top-selling memoir Becoming. Ella-Lorraine is not the only girl inspired by our forever FLOTUS. This past Halloween 3-year-old Parker Curry dressed as Obama's official portrait.

“We try to surround Ella-Lorraine with women who are go-getters like Michelle, women who are independent and smart, level-headed and loving,” says her father, Eugene Brown. Plus, “we make sure she knows about those who have gone before and have passed on.” pic.twitter.com/FRqwWr3ORN

It is very likely Ella-Lorraine will continue to honor Black women in this way in the future.

“Ella-Lorraine has been taught from an early age about the women for whom she’s named and how they used their voices,” Brown told Makers. “She knows that folks came before her that allowed her to be where and who she is today, and we’ve encouraged her to not back away from embracing that history.”

Michelle Obama Reveals The Truth About 'Leaning In': 'That S**t Doesn't Work'

Michelle Obama Has Some Dating Advice For All The 'Brothas:' 'Do Not Play Games'