Atlanta is perfect. I don't mean perfect in the pristine, clinically symmetrical way. This show is perfect because it holds a mirror up to reality

"Back at it, craftmatic, all I know is mathematics..."

I instantly recognize the opening salvo to Atlanta. It's "No Hook" by OJ da Juiceman on Juice World 2. I was first introduced to this street anthem during a summer at my cousin's house in Riverdale, Georgia. The song was literally a part of the city's soundtrack. OJ was a cornerstone of the early trap movement, in cahoots with Gucci Mane La Flare himself. It's this kind of nuance that gives the show it's legs. There are things that only a person who truly lived the experience in the city would know, and this song is one of them
Atlanta is based on a deeply intrinsic understanding of being young and black today – especially in Atlanta, GA and surrounding southern cities. It is a collection, or collage, of very specific, yet universal parts of black life weaving seamlessly in and out of each other. They thread back and forth, weaving a tapestry that feels too familiar to be fake
I know every main and supporting character in Atlanta upon meeting them instantly – because they're real. They are my friends, parents, relatives and acquaintances; most importantly, they're me. I'm not an Atlanta native, but I am an Atlanta resident, and I'm related to too many Atlanta natives to count. This show is more than just nods to the city in a series of homages. Of course there are moments like that

Like trips to JR Crickets for lemon pepper wings. 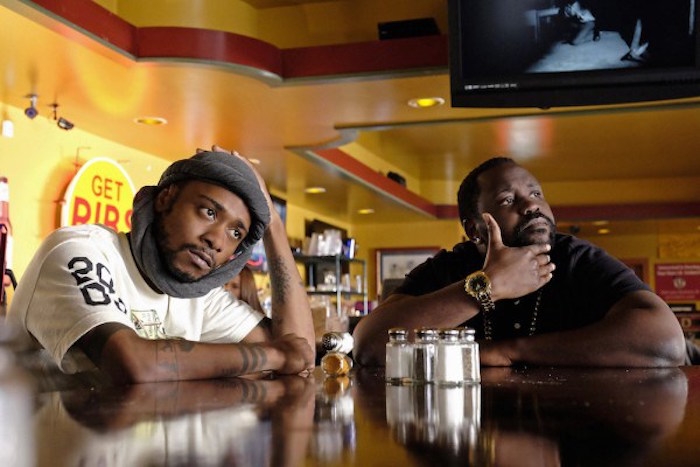 Photo: FX
But more importantly, they are moments that truly exist in black Atlanta life for many of us, and even more present are the general experiences that all of us know. Atlanta literally jam-packs these realities back to back at a pace that feels like watching a documentary more than a television series. From relationships with the people we know, to community norms on homophobia and mental health – it's all there. Even the random moments in life that have no explanation, like a man in a suit on the bus asking you to bite a sandwich, or just being in the wrong place at the wrong time. There's even time to get an n-word conversation in that doesn't feel like a PSA or after school special
Finally, as a self proclaimed blerd, there is a recognition that I have watching the character Earn Marks. That's the black nerd experience I know. The generally smart – even went to an ivy league school, but I'm black as black gets experience. There is no mutually exclusive interest or hobby that separates him from blackness. That's how I've always felt about being a black nerd, and this is the first time it's been on my TV screen
Atlanta's first two episodes are promising in a way that a television experience for the black millennial hasn't been, in my opinion, ever. There's literally so much more to unpack in the series this far (like the detailed depiction of our cultural ties to rap music), that I'm going to be rewatching several times before the next one airs. Where else would you see the cop that locked Gucci take a pic with the neighborhood rap star, other than real life? But after seeing it twice, I'm still able to confidently say, there's never been anything this authentically black, to me, on television
Atlanta airs every Tuesday at 10 pm on FX.

Photo: Giphy
Let me know what you think in the comments, because I read and reply to all of them. Hit the share button and tag a friend who needs to see this.