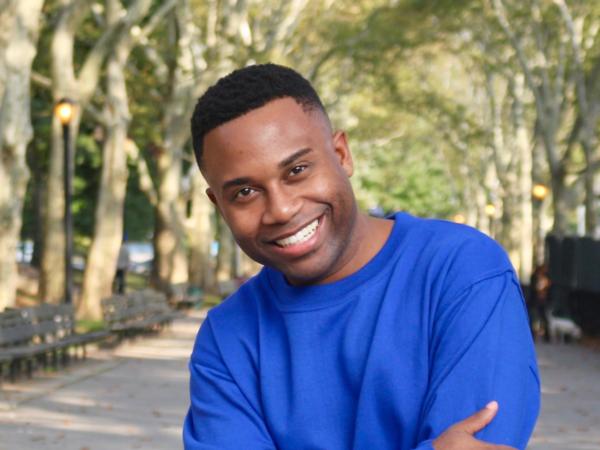 There's probably no need for me to ask this question, but I don't want to assume.

Do you know who this is?

Whether you're male, female, straight, gay, bi or (now) confused, you can't deny the work of art that Michael B. Jordan's body has become in the past few years. When the talented actor signed on to shoot the hit film Creed, the role required him to truly become a boxer. Critics praised the soul of the character Jordan embodied in his performance, but the actor’s actual body (which was equally, if not more, praised) was the work of his trainer (and now friend) Corey Calliet.

Calliet is often labeled as a celebrity fitness trainer, which is, on the surface, quite accurate, but as you get to know him, you discover that he's much more. I chatted via phone in New York City and although he was clear across the country in Los Angeles, California, our conversation felt connected.

Hailing from New Orleans, Louisiana (he still heavily carries his dope hometown accent), a chance opportunity led Calliet to LA to take his fitness career further. “In 2014, a guy who trained the cast of Fantastic Four in Baton Rouge reached out to me. They shot Fantastic Four in Baton Rouge. I was there when I met Michael, and the first day when me and Mike met was when the magic happened. I was on the set and I was working with Kate Mara, Miles Teller and Jamie Bell, but Michael was the one that I worked with the most,” Calliet explained. “Getting that job with Fantastic Four, Mike and I created a bond. Like, a brotherhood. He became family and was like, ‘You know what? I want you to help me get ready for Creed.’ So I was back and forth from California to Louisiana, which was hard because I have a 12-year-old daughter, but I had to make that sacrifice because I knew if I did it, it was gonna make everything so much better. So I got to LA and that’s when everything started happening. After Creed, my career really took off.”

Though he arrived in Hollywood with an amazing client and credits already in his arsenal, it still wasn't a breeze to find his footing. “I remember moving out to LA. Renting Airbnbs. Sleeping in the car sometimes. I was getting to the point like, you know what? I‘m just gonna rent a minivan,  I’m gon’ take a shower in the gym and just train my clients.”

He persevered through the rough beginnings in the new city, and carved out a career for himself that even a seasoned trainer would envy. His clients have included not only Jordan, but also actors Terence J and Lance Gross, rapper A$AP Rocky and even R&B singer Joe.

Very much of a striking personality and figure himself, it’s no surprise that recently the tables turned, and Calliet became the star. Earlier this year, he was one of the transformation specialists on E! Network’s Revenge Body with Khloé Kardashian, a reality show where regular people go through a major transformation, seeking the “ultimate revenge” on the haters in their life. Calliet killed the damn game with his clients by not just transforming their bodies, but changing their lives. Whether in front of a camera on a TV show or behind the scenes on a movie set, he steadily works that same magic over and over again, and it’s not by chance. There’s a formula.

Calliet’s no-nonsense, f**k-the-feelings approach is an element of “The Calliet Way”, the distinctive training style the fitness artist developed himself. And it works wonders. In a scene from Revenge Body, a bit of his inspiring technique is revealed — without a barbell in sight. His client, Ranella, unfocused, and unmotivated, makes up excuses about why working out is hard. She also begins to flirt with Calliet. He sternly shuts it down and uniquely articulates an “a-ha moment” for the, initially, lazy subject. It's a fascinating and inspiring moment that uncovers Calliet's true genius: his body wizardry is not only produced with dumbbells and treadmills, but also by restructuring his clients thoughts positively towards their fitness goals.

When Corey isn't crafting bodies (or in my opinion, performing miracles), you can find him enjoying time with his "mini me", sitting courtside at all-star basketball games with his homie Jordan (alongside Beyoncé, Jay-Z and Blue Ivy) and quietly plotting what's next for him in his thriving career. “I’m in development of my own athleisure line, I’m going to be doing more TV personality work and I have a new website that I’m about to develop, where people can subscribe to me. But fitness is never going nowhere, and I want to continue to try to be the king of that. And I think the way that I’m going to be doing that is by just continuing to be myself, and to get better at my craft.”

Just like the movies, TV shows and albums his superstar clients are prepping, I'm anticipating Calliet’s next blockbuster move as well.

Lean more about Corey Calliet at his current website, CoreyCalliet.com.