In late November, members of inherently sexist “men’s rights” and incel subcultures took to the internet to exercise the only talent they seem to have at their disposal: Harassing and intimidating strangers online.

Thirsty for attention and driven by self-righteous hate under a guise of moral piety, digital trolls came out from under their respective bridges in droves to target sex workers, threatening their hustle with the creation of #ThotAudit campaign.The now-viral hashtag has accompanied social media posts encouraging others to not only join in the financially destructive crusade against camgirls and Instagram models, but some promoters of #ThotAudit have even claimed that the IRS would essentially reward these vagina-hating vigilantes for their due diligence.

David Wu and a guy named Roosh have created a trend called #Thotaudit which means that if you suspect a female content creator of not paying taxes on donations then you can report them for a financial incentive. This has sparked a witch hunt. Terrible disrespect of women! ????‍♀️ https://t.co/wl4RSbzl08

According to an article by Motherboard, “Recently, trolls have begun harassing sex workers by saying they're going to report them to the IRS, and many sex workers are worried that they'll be audited. Some of these trolls are sending follow requests to the sex workers’ paid platforms, like Snapchat or friend requests on Facebook, to access more of their information. From there, the harassers say they’re using the IRS official whistleblower program to report them for tax fraud.”

While these trolls may consider the work these women participate in to be morally reprehensible — especially when measured against the prudent, hypocritical standards set forth by a sexually repressed mainstream — they don’t seem to realize is that not all sex work classifies as illegal prostitution. Though some sex work-related activity can be exploitive, as long as one is over 18 and working of their own volition, stripping, camming, porn acting and nude modeling all technically qualify as legitimate lines of sex work. Thus, there should be no issue with paying Uncle Sam accordingly. A number of sex workers have admitted to having zero qualms about paying the IRS — and why should they? As long as they accurately report each and every income-generating transaction to the IRS, they are adhering to tax laws. 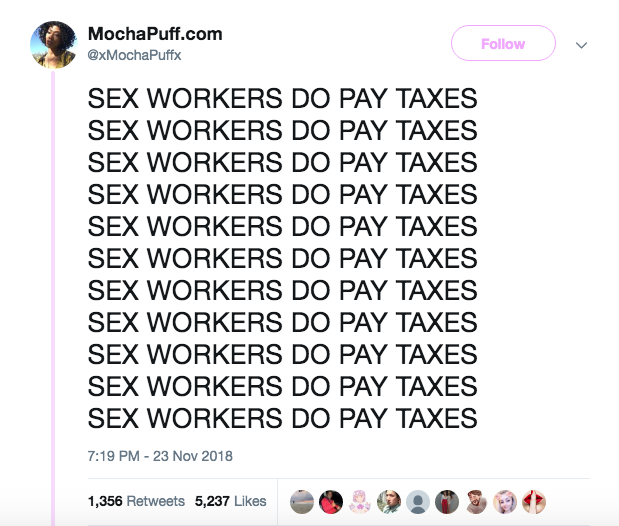 In order to effectively blow the whistle on someone for not paying their taxes, the IRS requires a significant amount of detailed information on the person, starting with their legal name. The likelihood that sex workers of any variety — including those who may engage in activity that legally classifies as prostitution — aren’t operating under aliases is slim to none.

The IRS requires rather detailed information from whistleblowers, including, at the very least, the taxpayer’s legal name and location. While some cam girls and other online sex workers may operate under their legal name, I doubt many do,” tax attorney Christopher Kirk told

Rolling Stone. “Moreover, the Service wants actionable information about significant tax issues, not guesses, and the program is not a forum for people with an ax to grind. Because the incel trolls engaging in the #ThotAudit campaign likely have no idea whether their targets file taxes or report the income from their online work, I don’t think it likely that such reporting will actually trigger an audit.”

So much to the chagrin of the trolls responsible for #ThotAudit, it appears that “sex worker” or even “THOT” — the acronym for “that ho over there” — is not actually synonymous with “stupid.”

"Sex workers are regular people trying to make ends meet — just like you. We want to pay our taxes,” former pro dom *Eileen Carlton said in a phone interview with Blavity.

Like any other professional serious about their grind, judicious members of the sex work community are obviously going to take whatever precautions necessary to protect themselves. Now, does that always work out in their favor? Of course not.

"We face many occupational hazards, including intense stigma for providing services that pretty much every adult utilizes in some form or another,” Carlton said.

Stigmatization surrounding sex work and adult entertainment leaves women within this industry especially vulnerable to numerous life-threatening situations. According to the World Health Organization (WHO), “Globally, female sex workers are 13.5 percent more likely to be living with HIV that other women of reproductive age.” Another study conducted by NCBI found that the likelihood any sex worker could fall prey to sexual violence during the course of their career ranges anywhere between 45 to 75 percent. The intersectionality between sex work criminalization and systemic racism also puts cisgender and transgender women of color at a greater disadvantage than their white counterparts. African Americans made up roughly 40 percent of all prostitution arrests in 2015. In addition, of all the documented cases of murdered sex workers in the U.S. that same year, approximately 41 percent were Black cisgender women and roughly 30 percent were Black trans women. Despite being a high-risk industry, the need to survive can always outweigh one's fear of consequences.

“For some people, sex work is the only way to make a living, as a marginalized or disenfranchised person,” said Carlton.

The advent of the internet helped to diversify the sex work market, providing resource that could aid in minimizing some of the physical risks associated with this line of work. However, recent changes in policy have now complicated sex workers' ability to leverage the web like they used to, putting additional pressure on the industry.

An unlevel playing field for web content has now been established, thanks to the repeal of Obama-era net neutrality protections. Now privatized internet service providers (or ISPs) can essentially micromanage consumers’ access to the data they seek, slowing internet speeds while simultaneously charging more when browsing certain websites. Many predicted this would inevitably limit the distribution of above-board pornography online, and hurt the business of the many independent adult entertainment performers who depend on the ability to livestream and sell adult content.

Just this past Monday, Tumblr CEO Jeff D’Onofrio announced the site’s plans to ban all adult content. Though discussions surrounding “sex positivity, your relationships, your sexuality and your personal journey” will remain uncensored, starting December 17, 2018, all sex-related imagery — that’s videos, photos and GIFs — will not only be prohibited, but purged from the blogging and social networking site.

"We want to make sure that we continue to foster this type of diversity of expression in the community, so our new policy strives to strike a balance,” D’Onofrio said in the Tumblr post announcing the change.

Censoring content to achieve "balance" not only seems counterintuitive, but this new policy comes at the detriment of sex workers whose livelihood depends on the use of this platform.

Having a business in anything sex related seems to becoming harder each day. With Tumblr being the next one to take the step to take total control over what we want to express. What was once a place where many people first descovered artistic pornographic images has now become just another conservative platform that is unsafe for sex work… On a more positive note, luckily we are resourceful people and are sure to make a new space for ourselves, so that the next generation doesnt have to deal with sexuality that has distorted by censorship ????

Couple that with the Trump administration's move to repeal net neutrality, and an unsettling precedent enabling the attack of sex workers for their chosen career path is made readily apparent. Clearly, everyone is aware that living on the fringes of society sometimes comes with the territory of sex work. So with the odds already stacked against these women, why would random strangers take this marginalization a step further, launching a digital witch hunt to take down individual members of the already vulnerable demographic, one by one?

“That's why I’m worried. Because I feel like this is leading down the road to outing people to their families and their co-workers,” an anonymous California-based sex worker shared with reporters at the Daily Beast.

"The whole issue is that they are specifically targeting us because we’re women, because we’re using our sexuality to profit, and because we’re not giving it to them for free,” the Daily Beast's California-based source continued.

Carlton expressed similar concerns. “Taxes are just one part of the issue. The other is the threat of having our accounts with payment tools that support our income streams — PayPal, Patreon, Venmo and the like — shut down. Many sex workers rely on those services to survive,” she said.

Their concerns are valid. Recent reports have now found evidence that the trolls are actually mobilizing beyond the hashtag. On top of attempting to report sex workers to the IRS, Motherboard has allegedly uncovered a number of databases comprised of sex workers’ personal information, which #ThotAudit endorsers allegedly created to share with sites like PayPal and Circle Pay. One database on 8chan included over 166,000 entries, including “full names (although it’s unclear if any of these are legal names or are accurate), locations, links to wish lists, individuals’ payment processors and bios."

Anyone who has ever been the victim of trolling would agree that the aim of any online harasser is to incite hysteria and outrage, ultimately perverting and manipulating the protections of the First Amendment to serve their own malignant agenda. For sex workers who have fallen victim to #ThotAudit’s reign of terror, it presents a classic case of “damned if you do, damned if you don’t.” Speaking out could prove just as damaging as remaining silent, particularly for those sex workers who capitalize off of their anonymity. Between the structure, permeance and speed information sharing offered by the internet and the slow turning wheels of justice, it seems like the old school “sticks and stones” adage has become a moot point. In the digital age, words not only hurt, they have the potential to literally ruin lives.

“Our society gets off on wanking it with one hand, while pointing fingers with the other,” Carlton said.

But while these trolls may think that their efforts will ultimately result in a total takedown of the adult industry, in actuality, their harassment of these women merely highlights their own pathetic ignorance. They fail to recognize that prostitution is known as “the world’s oldest profession” for a reason: Not only are these women intelligent, resourceful and resilient, but sex is a recession-proof product. As long as humans continue to experience arousal, the demand will always be there. So try as they might to come for that coin, sex work and adult entertainment are not going anywhere.

*This name was changed to protect the source's anonymity.