Protestors were heard chanting, “Why are you in riot gear? We don’t see no riot here!”

Whether it’s Ferguson and Mike Brown or the most recent controversy surrounding the killing of Anthony Lamar Smith, chaos always follows when police officers are acquitted of killing black men.

In St. Louis, protests have continued nonstop since the release of the Smith verdict. White former St. Louis police officer Jason Stockley was found not guilty of murdering Anthony Lamar Smith and placing a gun on his dead body.

The protests have been commended for being mostly nonviolent. However, many peaceful protesters have been receiving what has been criticized as extra harsh treatment at the hands of St. Louis police officers, who have been chanting "Whose streets? Our streets!" as they arrest people.

A practice called "kettling" is causing both protesters and police officers trouble.

Kettling involves boxing protesters into a limited area in order to control them.

St. Louis police have used this technique often during the Smith protests, but now some say that it is resulting in innocent and peaceful protesters being arrested for no reason.

Recently, cops in riot gear shut down a peaceful protest before sun down. Demostrators felt that this action was an illegal challenge to their freedom of assembly, but began to disperse according to the Huffington Post.

However, they were kettled as they continued protesting near the St. Louis Galleria. They were told to evacuate the area.

Protesters yelled that the police force's riot gear appeared to be unnecessary since there were no reports of violence or property damage. Protesters could be heard chanting, “Why are you in riot gear? We don’t see no riot here!” 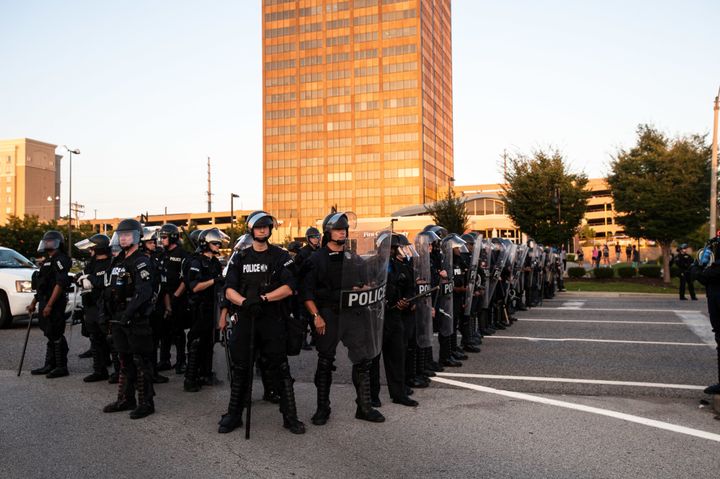 St. Louis County Executive Steve Stenger had issued a statement for the planned protest that day and posted it via Twitter:

This is my statement on today's planned protests in Clayton. pic.twitter.com/vVHcc4EiG4— Steve Stenger (@StengerSTLCo) September 20, 2017

Many protesters were arrested at the mall and things things escalated nearby, where many people were arrested for being party to a protest they weren't even participating in.

“I hear the police say it was their street, but it’s literally my street,” said Nelson. “I have coffee on that street, and I own property on that street. We were not active protesters. We were looking into the neighborhood to observe events that were unfolding.”

Those arrested (about 22 per the police report) were charged with trespassing, rioting, assault on a law enforcement officer and disorderly conduct. The police reportedly noted that they only arrested those who didn't disperse, but witnesses claim that the police made it difficult for them to exit due to boxing them in. 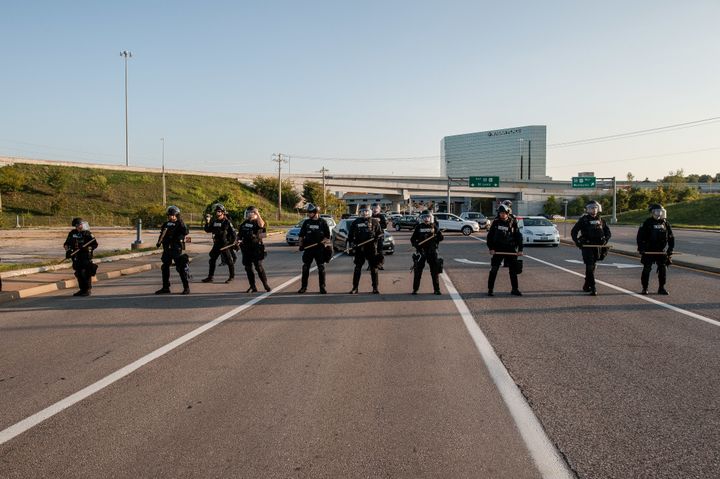 "I want to send a clear message: these are not your streets. And they never will be," St. Louis County Executive Steve Stenger told protesters late last week according to the Huffington Post.

The American Civil Liberties Union isn't having it with the police department's kettling and arrest strategy. It's filed a lawsuit claiming that the police officers have violated the people's civil rights.

Both St. Louis County and Richmond Heights police agencies have claimed their actions were justified, however, according to the Associated Press. One particular volatile moment was captured when St. Louis police officers were photographed placing Reverend Karla Frye in a chokehold during the shopping mall arrests, per St. Louis Post-Dispatch.

“She assaulted a police officer,” said St. Louis county police spokesman Shawn McGuire. “When she jumps on the back of a police officer while affecting an arrest, that’s an assault.”

Richmond Heights Captain Gerry Rohr claims that the photo was misleading. “She was not placed in a chokehold,” noted Rohr. “That’s burst photography. I guarantee the officer was trying to push that woman away and get her under control.”

Frye's family and lawyers claim that she was attempting to save her 13-year-old grandson from the rough treatment he was receiving by police officers. The 56-year-old reverend's bail has been set for $10,000, with 10 percent in cash needed to bail her out. Donations were gathered outside of the Justice System by protest leaders.

Following the weekend's police actions, a group of St. Louis businesses put out a statement in support of protesters that condemns the city's police, The Riverfront Times reports.

Part of the statement read: "It is not at all clear that police have our best interests at heart when they are preoccupied with macho attempts to 'own' the streets. Frankly, we have reason to wonder if we have more to fear from the police officers than from a small handful of vandals."