10 Things You Should Know About Trinidad & Tobago's Annual Carnival

From past to present, learn more about the robust Carnival culture on the beautiful twin islands.

February 27 and 28 are the official calendar dates for Trinidad & Tobago's annual Carnival. It is the last hurrah before Ash Wednesday and the time of year when Trinidad's capital, Port of Spain, is bustling with the bacchanal of the weekend and after-work fetes. The Caribbean paradise roars with sounds of sweet pan music and the scent of doubles filling the air. Those playing Mas have their costumes ready to show off on the big day. Natives, both young and old gather for a wide variety of festivities. All is jovial and blissful as even visitors pour in from foreign countries to partake in this massive celebration of our particular West Indian history and heritage.

The cultural impact runs deep, and as thousands travel to T&T this weekend to chip and lime it is cool to brush up on some of the important details of Carnival in Trinidad & Tobago.

1. Carnival in T&T is the most popular and profitable time for tourism.

The industry of tourism employs over 16% of the island population and effects the livelihoods of a significantly larger amount of people. From farmers to fishermen, bartenders to busboys cooks to caretakers, the economy is strengthened by the commercial organization and operation of making Trinidad & Tobago a beautiful place to visit. Among all on the cultural and tourism calendar, Carnival is by far the biggest source of revenue for the island.

2. The religious and cultural importance of Carnival in T&T, though commonly unknown to younger generations, is deep and rich.

Carnival marks the beginning of Lent (which this year starts March 1 and ends April 13). French plantation owners conducted formal balls and masquerades to signify transitioning into the religious season for 40 days of preparation for Easter. During this time, slaves were exempt from participating in Carnival and instead formed their own celebration, called Canboulay, to mimic the elite. This portion has since highly influenced Carnival throughout history as well as music in Trinidad & Tobago.

3. The two-day festivities really begin in the wee hours of the morning.

Preceding the official street parade in Trinidad & Tobago is a festive custom called J'Ouvert (joo – vay). Hours before sunrise, the Jab Jabs take the streets smeared in paint, powder, mud and/or oil. Historically, this was done to celebrate the emancipation of slavery in 1838 as well as to commemorate those who participated in civil disturbances–they'd smudge themselves with oil or paint to avoid recognition.

4. Among recreation and relaxation, Carnival season is also a time for heavy competition.

For musicians, dancers, costume designers and the like, Carnival represents the pivotal showcase of your best work. All participants, whether it be for music or Mas prepare very early for grand contests such as Calypso Monarch, International Soca Monarch, Carnival Road March, Panorama and more. Prizes range anywhere from millions of TT dollars to cars.

5. Masqueraders are more than decorative partygoers. They're, in fact, very important characters to a much larger tale of the history of Africans in Trinidad & Tobago.

The aforementioned Jab Jab is one example, he would be donned or restrained by the waist in locks and keys held by his imps and carries a pitchfork with him. Smeared in mud or oil, he'd wine to the beat of music played on tins by some of his imps. Another example is Dame Lorraine, a take on 18th-century French aristocratic women who wore dresses stuffed in the hips and bust. This character is usually played by men. Lastly, the Burrokeet, a Venezuelan import, portrays a dancer riding a small donkey.

6. Trinidad's most prized musical export, the steelpan, is one of the most versatile instruments in the world.

Evolving from frying pans, dustbin lids and oil drums, steelpan (pan for short) is a huge part of the arts scene in Trinidad. It reportedly became internationally observed after the 1940s when the US Navy arrived and had heard the percussion sounds being played. The steelpan quickly became the sound most associated with all of the Caribbean.

Calypso and soca boom and thunder through gigantic speakers mounted on trucks. Bacchanalists, what I like to call the paraders, march alongside the music showing off their costumes. The vibe is infectious, and you will know that you truly belong when you find yourself uncontrollably dancing along. 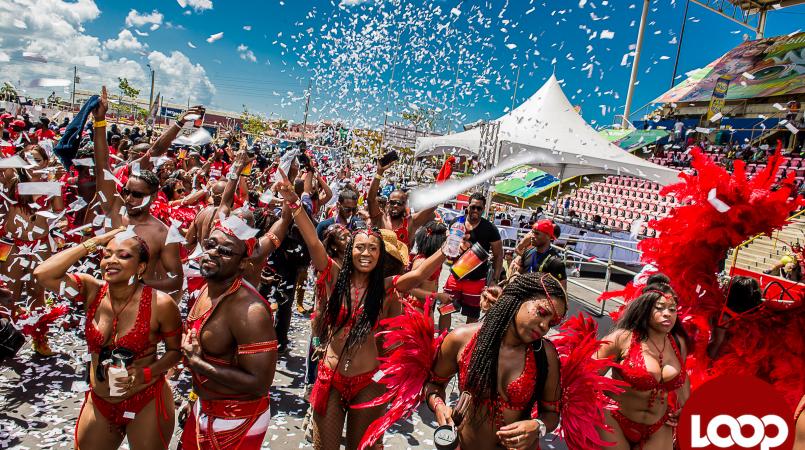 8. Among the music and the dancing, when in Trinidad & Tobago for Carnival, one must indulge in the amazing cuisine.

Food is another huge benefit of the culture in general, but if you're stopping by the islands for Carnival it is a must that you try all of the authentic nourishment. This includes, but is not limited to: roti, doubles, polourie, dhal, oxtail, goat, pelau and so much more. Tons of shops and stands will be along the parade route and located elsewhere to accommodate hungry patrons. For the drinkers, rum is a big staple for most alcoholic drinks, and the rum punch is a guaranteed knockout. Those who prefer to stay alcohol-free can try sorrel and mauby.

9. And of course, there's opportunity for the little ones to participate as well.

While most of the activities on the calendar for Carnival are catered to those who do not need parental supervision, children have a segment of their own. Kiddies Carnival features the junior version of the main street parade, where kids sport their own elaborate costumes to showcase for competition as well.

10. Costumes are one of the most expensive aspects of Carnival.

Most are prepared months to a year in advance because of quantity and intricate detail. If you're looking to get the most out of your carnival experience in Trinidad & Tobago, then it is highly suggested that you make arrangements to reserve a costume and have it fitted for you as soon as possible. Also, prepare to spend a few hundred US dollars for it. Nonetheless, it is all worth the money in the end.

As we say in T&T, it's time to GET ON BAD! Happy Carnival, everyone!