We stand in solidarity with students at Missouri, Yale and all across the country who are boldly making their unapologetic demands for equity, justice, and an education that does not denigrate our identities, heard across dining halls, classrooms, and campus greens. Below you'll find a cross section of campuses who are joining together in solidarity, and insights into events transpiring on campuses around the country. Our goal is to share the information relevant to our community, as they stand up and fight for what we have always deserved, but systemically been denied. Connect with each other. Build with each other
We will win
- Team Blavity

Summary: On November 12th, Wesleyan University (Middletown, CT) conducted a campus black-out in support of University of Missouri students. This event happened in the wake of a controversy surrounding free speech on campus. Last month, the student body voted to slash the budget for the campus newspaper by over $15,000 for a lack of diversity and publishing an Op-ed piece critical of the Black Lives Movement. Important Tweets/Links: https://twitter.com/abbycunniff/status/664857774858371072 https://twitter.com/TheSecondArch/status/664875824802320384https://twitter.com/mariachong/status/655912624832446464http://www.washingtontimes.com/news/2015/oct/20/wesleyan-students-slash-campus-newspaper-budget-af/?page=all https://twitter.com/mariachong/status/655912624832446464 Campus paper budget yanked in dust-up over 'Black Lives Matter' op-ed

Summary: A statement was released Purdue which referred to events in Missouri, but in a rather dismissive way. Important Tweets/Links: https://twitter.com/rgay/status/664594845562970112

Summary/Latest Update: Had both a blackout protest where students shared personal statements and experiences followed by a walkout and teach in from Africana graduate students. Important Tweets/Links: #IndictAmerica  https://twitter.com/ablackscream/status/664871704892710912 https://twitter.com/ablackscream/status/664872684296273921 https://www.youtube.com/watch?v=UxC0hUXU_IQ *Odemi Pessu is the speaker in the video above.

Summary: Students on campus staged a demonstration in the middle of Yahoo News’ Digital Democracy conference to raise awareness. They then went to the cafeteria to reach their classmates. Important Tweets/Links: https://twitter.com/fergusonlum/status/664919458499182592

Summary: SOUL (Students Organizing for Unity and Liberation at University of Pennsylvania) organized a demonstration earlier today, inviting other local Philadelphia university students to join. Penn protesters met on the College Green, while other universities joined the group at a location on Drexel University’s campus. Important Tweets/Links: 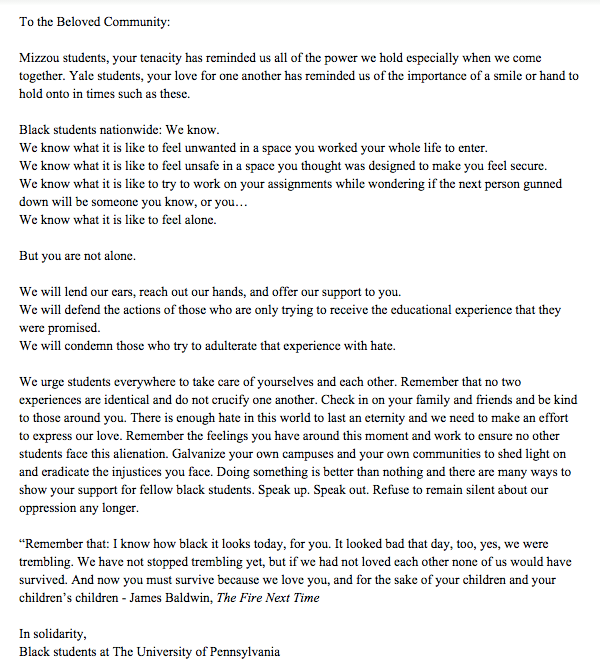 Summary: Statement of Solidarity from Black Community Leaders “As Black students at Harvard College, we are overwhelmed and inspired by the courage, strength, and resilience demonstrated by our peers at the University of Missouri and Yale University. Further, we are moved by the successes of their activism, which include the resignation of Tim Wolfe and Yale’s historic March of Resilience. These steps forward are the results of students employing their bodies and voices, and are reminders of the power we possess as students and citizens of this country. To the faculty, administrators, and others who actively choose to remain silent as students’ lives are threatened across the country, know that your silence and inaction causes harm. Take action.”

Summar: Columbia students held a rally in solidarity with MU and Yale students. Some of those attending the rally shared stories of micro-aggressions — or covert racism — on campus and in the classroom. Important Tweets: https://twitter.com/MayaEarls/status/664961696369364996 https://twitter.com/Miel_Machetes/status/664857291909394434

Summary: Stanford students held a rally, which was also attended by administrators, to stand in solidarity with the black students at Mizzou. There was a great turnout for the rally and even the official StanfordU account tweeted support. They have also organised a time of speaking out and healing which will be taking place tonight and which also has the aim of brainstorming action steps to make the community ‘safer and stronger’.   https://twitter.com/zentronix/status/664898858611118080 https://twitter.com/Benji_Fernandes/status/664984916203929603 Facebook event with pictures: Follow up event ‘Speak Out’:

Summary: President Samuel L. Stanley and Dean of Students Timothy Ecklund linked arms with students and faculty members participating in a blackout protest in support of the University of Missouri protests. https://twitter.com/sbstatesman/status/664928140041539584 https://twitter.com/RachelChinapen/status/664979591442731008 Gallery of images from the demo:  So what's next? Share this post on Facebook to show solidarity with Mizzou and organize on your own campus to get your voices heard.

Kash Doll On Rooting For Everybody, And Her Secret Talent