A Millennial Love Story: How Working Towards Better Communication Helped This Couple Grow Individually And Together

A conversation with Rebekah and Shola.

Both natives of Staten Island, NY, Rebekah and Shola crossed paths many times before what one would define as actually meeting. The first time Shola saw Rebekah he noticed something about her that would draw him to her again years later. One day during his senior year of high school he was running late for school and happened to see her at a bus stop not far from his family’s home.

Years later, after going away for college, he was out with his sister at a party and spotted Rebekah and pointed her out saying that she would be his wife.

Turns out the two of them had both been scoping one another out on MySpace and built up the  courage to exchange numbers and from there a relationship began to blossom. For ten years to couple grew together off and on, occasionally taking breaks that ultimately strengthened them as individuals and helped create a better bond. Now the pair resides in New Jersey and have been engaged for four months.

What does black love mean to the black community?

Shola: I think she said it perfect, it’s for us, it’s by us. It’s just making sure that we’re putting a better emphasis on what we give to the fruits that we bear. What our parents instilled in us what we plan to instill in our children to prioritize our initiatives that benefit us first. It goes into other things, like how we support one another as well.

How did you know you were ready to commit?

Rebekah: I never wanted to break up. It always felt like we had to and it was best that we separated at times and got a chance to grow individually and experience things we may experienced being together so young for so long. I think us separating at times really helped to solidify that I really wanted to be with that person because I wanted to come back and when we did come back it was stronger and better and we were more mature and it just validates this is why I was with this person to begin with.

Shola: When we separated a lot of the times I didn’t really get it but the last time when it made sense for us to separate I knew it was time for us to commit when we got back together because I took the time to really heal and really understand what it was I was lacking to contribute to my relationship. I knew that whatever demons I was fighting in my free time were solved and I knew what it was because I didn’t need to rely on what the relationship brought to the table I was able to rely on what I brought to the table for myself. So in understanding what I lacked for me to love me and cherish me I was able to commit and be in this.

All relationships require compromise, how do you maintain yourself while keeping your partner happy?

Shola: There’s no I in team really. I thank God we happen to be in a  relationship that meshes as well as it does. We’re both artists and love the things we do outside of our relationship. I don’t have to compromise chillin with my boys or pursuing photography. I’d say for those looking for an answer to that question, you don’t come into a relationship thinking I’m going to hold on to this and that. It’s like a puzzle, or a game of give and take and you are going to compromise if you’re in a relationship. You’re going to adapt to new things and get rid of old things so the collective works efficiently. 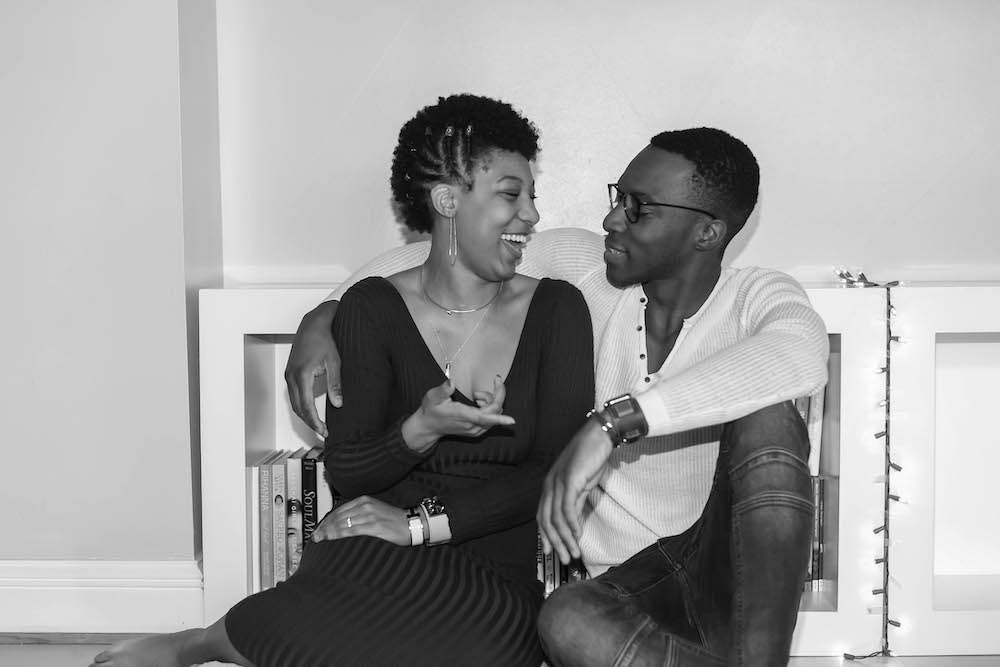 Who do you look to for advice on your relationship?

Rebekah: In the beginning I would talk to my girlfriends a lot and I just I didn’t like how they viewed him at some point and I didn’t like the things that I said when I would vent to them. So at some point I decided I didn’t want to seek advice from so many people. Today I try to keep it in house. I really try to emphasize me and Shola speaking. If I’m seeking to resolve something with my partner, my partner should be the first person I try to resolve it with.

The second person is my therapist, What we usually do when I’m talking about an issue within my relationship is look at what can I do, what’s going on with me, what’s the conflict within myself. So with my therapist I’m able to resolve something with myself to help me resolve an issue with my partner.

Shola: It’s gonna sound like a lie but it’s really true, shout out to therapy in general. All black people and couples should have a therapist. In terms of conflict resolution, if I can’t talk to you I talk to my therapist and she helps me work on my delivery for you.

So you go to couples therapy?

Rebekah: I started to do couples therapy in 2015, we hit a roadblock and we needed help so I researched black male psychotherapist and I thought he was awesome and I also have my own therapist. We were on and off with couple’s therapy but now we’re more consistent. We have a new therapist she’s actually a white middle-aged woman and she gets it, she’s a gift. She’s culturally sensitive, she’s woke, she’s intelligent and she understands history, she’s empathetic and she’s a professional so she does her job well. She’s excellent, I feel seen with her.

Shola: Couple’s therapy helps you on how to speak to your partner. Sometimes it’s hard to understand where Rebekah is coming from with some of the things she says. One thing I will say for a fact is without professional help, especially with the things we aren’t equipped to deal with, without that I don’t know we would be able to resolve the issues that we do. It helps me with more efficient ways to communicate.

What is the hardest part about being a millennial being in a relationship in today’s climate?

Shola: Growing up in a city you can fall in love five times in the summer alone. I feel like in our millennial society people are like “if she ain’t working out for you go find somebody else”. I put a big emphasis on trying to work on something you’ve got.

There was a point in time I had to come to terms with a lot of the stuff that I had to uninstall, like malware. We have to own up to our own things. When it comes to working I find that a lot of it is our fault. We’re so spoiled with the thought that for every man in NYC is seven women. Especially when we grow up hearing things like “fuck as many women as you can while you’re single because when you get married it’s a dub, it's downhill”.

Rebekah: In general millennials they don't really understand the work it takes to solidify the long lasting relationship. Referring to what you said about millennial women leaving for one little offense, I feel like it was an offense that you may not have tolerated. I think a lot of millennial men have been trained to feel like they don’t have to tolerate things. Women are trained to feel like we have to get chosen. I applaud women for leaving, leave for the little offense. That’s the only way to train men to understand that you aren’t going to have me tolerate something that you would not. I feel like we do need to discuss in detail what women are leaving for. Are we talking about not being texted back? What are the offenses that women are leaving for and define what’s legitimate and what are some of the things that could have been worked through?

If you could define love in one word what would it be and why?

Shola: Devotion, being devoted to whatever it is that will answer whatever situations that are before you. You’ve got to be devoted to the end goal at the end of the day. With that, anything is possible.