The death of Nipsey Hussle sent shock waves across the nation. Although we are still mourning the death of the cultural architect, his message lives on. Tuskegee University graduate Asaud Frazier is continuing Nip's legacy of Black entrepreneurship and community investment with a pop-up community in Wilcox County, which has been dubbed Alabama’s “worst county” due to excessive poverty and high rate of unemployment, among other factors. Frazier's goal is to create a self-sufficient community of housing and schools for low-income families, where they can collectively learn how to support themselves.

"This pop-up community initiative is about creating jobs, promoting ownership and providing people tools to sustain themselves. Tiny- to medium-sized homes will be powered by solar and biofuel and waste from the community. It will be nonhazardous and composted," Frazier said on a fundraising platform for the project.

Frazier, 26, has been a fan of the Victory Lap artist his entire life. When Nipsey was killed outside of his Marathon Clothing store on March 31, Frazier was further motivated to see his project come to fruition. He believes the pop-up community is one way in which the marathon will continue.

On April 14, Frazier officially set course and launched the project. Currently pursuing a masters in plant and soil science at Tuskegee University, he intends to set up the community on the land that his family owns. Blavity sat down with Frazier to chat about his initiative to empower the Black community through ownership, and the impact the late musician and activist had on his life. 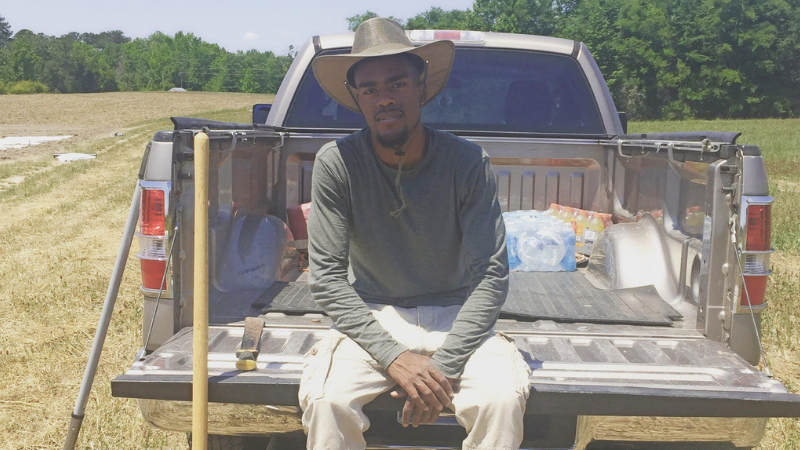 Blavity: How did you get connected to the Wilcox County?

Asaud Frazier: Wilcox is so historical. My family has had this land for a long time, and we are paying the taxes on it; my family has had land in Wilcox for over 100 years. The land is about 39 acres, and this is where I want to start the first model community.

Blavity: What is your vision for the project?

Frazier: My vision for the project is to build a self-sufficient community. We have all the resources that we need in our community, we just have to make a call for them. My goal is to create an area where we are growing our owns things and processing them such as cotton or hemp. We will own the rights of the land. We will be able to produce our own fresh purified water. We will build our own schools.

Blavity: Who will live in the community?

Frazier: I want to start it off for single mothers that are in Section 8 Housing. The first community will be anywhere from 100 to 250 families. I want people in our community to specialize in a trade such as technology, hemp production or masonry. As it grows, this community will be intertwined with other ones. The goal is to have this community help jumpstart the next community.

Blavity: How has Nipsey Hussle inspired this project and your life?

Frazier: Nipsey Hussle has been very inspirational. He was totally about sustaining yourself and not being dependent upon somebody paying you. He was independent. Nipsey Hussle had this idea where his businesses were integrated vertically, similar to what I want to do with mine. I want to grow everything from the ground up. We don't have to middleman our products. Nipsey Hussle was all about that, and it's one of the reasons I embraced farming — to forget the middle man and grow my own stuff; that's true freedom. He was killed because of what he stood for and who he touched. He inspired so many people. It's a movement; the marathon continues.

Frazier added that the reaction from people in his community has been mixed, but he plans to push forward and aims to break ground on construction in July. Currently, Frazier is in the fundraising phase for the project. He encourages anybody who supports this project to donate their resources and lend any help they can. Furthermore, he plans to carry on the legacy of Nipsey Hussle through the project by having faith in himself and trusting the process.