The 'A Kids Book About' collection gives it to children straight.

A Kids Book About, Inc. is a new publishing company that launched October 1, 2019, touching on critical topics and issues as they relate to growing up and fitting in.

The first book that hit the company’s cyber shelves was A Kids Book About Racism. Co-founder and CEO Jelani Memory wrote the book, speaking from his own experiences as a Black man and father. Memory is a father with a blended family. In addition to his son, Memory has four white stepkids with his current wife and a daughter from his first marriage.

"I was very aware that having a Black dad and a white mom would give [my son] a complicated journey with race, much the same as I had as a kid,” Memory told Blavity.

The creator's mission is to form a space that allows parents as well as educators to engage in meaningful, thought-provoking dialogue with young readers through its series of "kids books that matter. There are no dragons, silly bears, or cute tales about princesses. Only the challenging, empowering, and important topics that kids experience every day." Ultimately, the aim of the publisher is to create books that treat kids as the smart tiny humans they are with straightforward, honest conversations.

“We wanted kids to have room to apply the books to their own lives. The moment you have a dragon learning a lesson about tacos in a book, the kid isn't thinking about who this might apply to in their life.  We thought kids deserved better," Memory said. 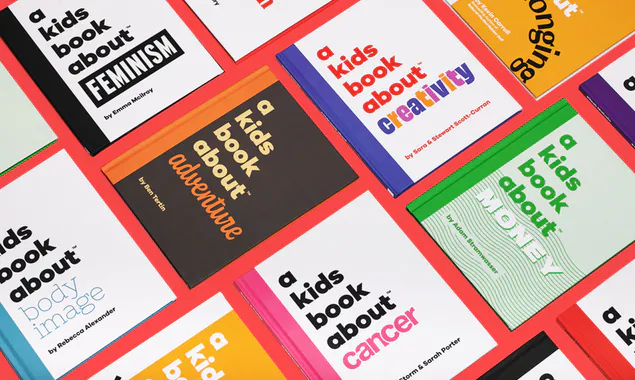 Photo credit: A Kids Book About

What Makes 'A Kids Book About' Different?

While "A Kids Book About" doesn't fit the norm of children's books rich with fluff-filled fantasies, the series is aimed at children as young as five-years-old. What makes this collection stand out amongst the rest are the various authors who write about topics personal to themselves. Though there are no grand pictures, the book has alluring, bold colorful elements, layouts and font styles. The covers, although simple, are also pleasantly inviting.

Books in the series are a bit lengthier than the typical children's story, ideally best read to kids by a parent, guardian or teacher. The last few pages provide a section that encourages opening the floor to both children and adults for a candid discussion. A note section is available as well, so readers and listeners can write down questions or even doodle.

Some Titles From the 'A Kids Book About' Collection Include:

Navigating through childhood can be challenging at times, but "A Kids Book About" has been designed as a helpful guide and conversation starter. In addition to the above titles, the company is expected to publish six additional books available in December. Because these stories deviate from the standard, picture-style children's books, diving into more substantial content, it will be interesting to see how they are received and if they become a hit.

Why COVID-19 Is Trump’s Hurricane Katrina