Not much has changed.

2020 has taken so many from us and sadly, Rep. John Lewis is one of the most recent additions to that list. Some may know the congressman as a politician who used his platform to advocate for the voiceless. Others may recognize him as a frequent collaborator in the fight for civil rights alongside activists like Dr. Martin Luther King Jr., Bayard Rustin and Dorothy Height. Regardless, long before Lewis ascended the ladder of political royalty, he was like many young organizers in our community — in the trenches fighting for his people.

The current protests that we’ve witnessed, sparked by decades of racial inequality, are not new. Yes, the demonstrations might be for newer atrocities, but many injustices from Lewis’ younger days haven’t changed. Blavity was able to obtain a few digital images of Lewis, some rarely seen, from the Getty Images archive. According to Bob Ahern, director of archive photography at Getty Images, the criteria for selecting which photographs should be digitized and archived pertaining to the civil rights movement depends on customer trends and what their audience wants to see.

Though the images of Lewis date back decades, the parallels between then and now are all too familiar.

1. Selma to Montgomery March vs. March in Manhattan. 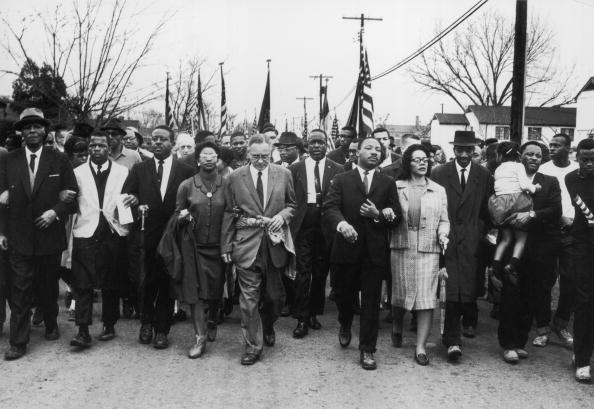 In this image, the most downloaded out of the entire archive, Lewis is pictured alongside Dr. Martin Luther King Jr., Coretta Scott King, Hosea Williams and other civil rights leaders marching from Selma, Alabama to Montgomery, Alabama. In comparison to the protests of today, it seems that Black-led demonstrations always appear peaceful until police or white disruptors get involved and insert violence. 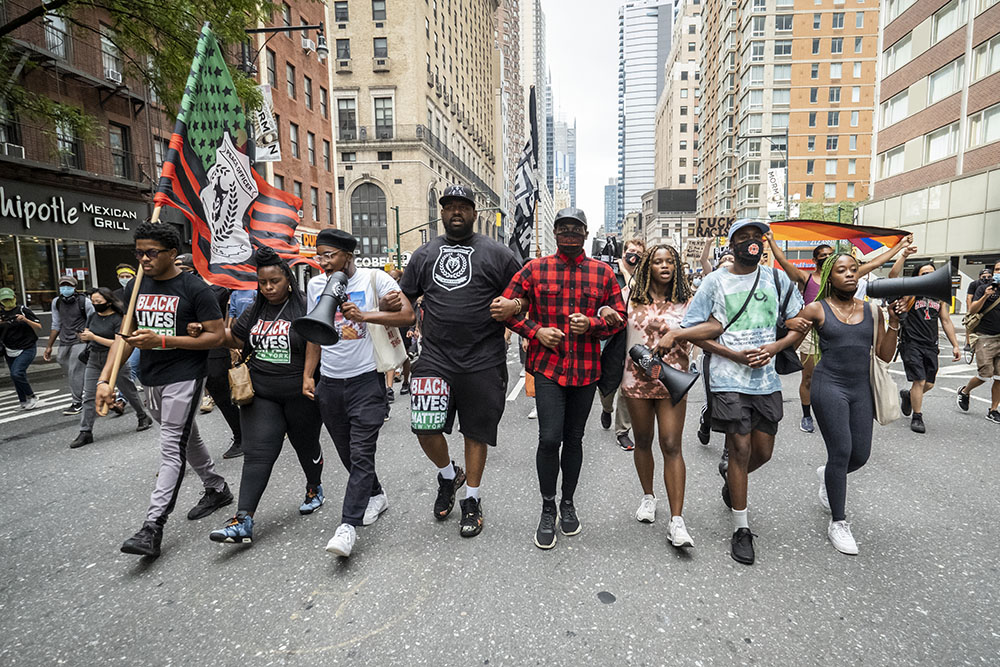 Black Lives Matter (BLM) protest organizer Derrick Ingram turns himself in to police, following an alleged assault of an officer, during a prior protest. Other organizational leaders march alongside Ingram in support. 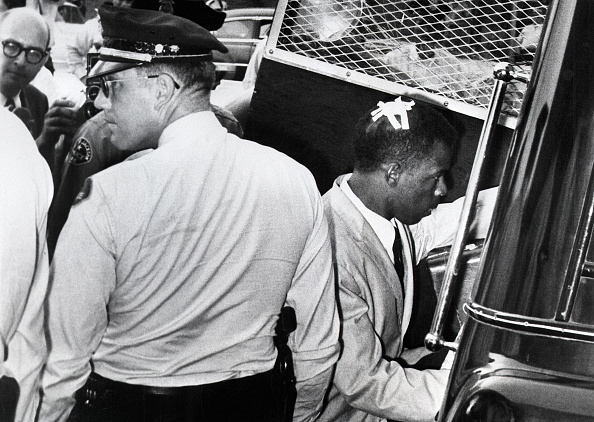 Here, Lewis, while he was a student leader for a Freedom Riders group, is being arrested with a head injury. The arrest happened in Jackson, Mississippi after he and the other Freedom Riders arrived. Much like their predecessors, student leaders of this day and age are still taking stances to dismantle the system of white supremacy. 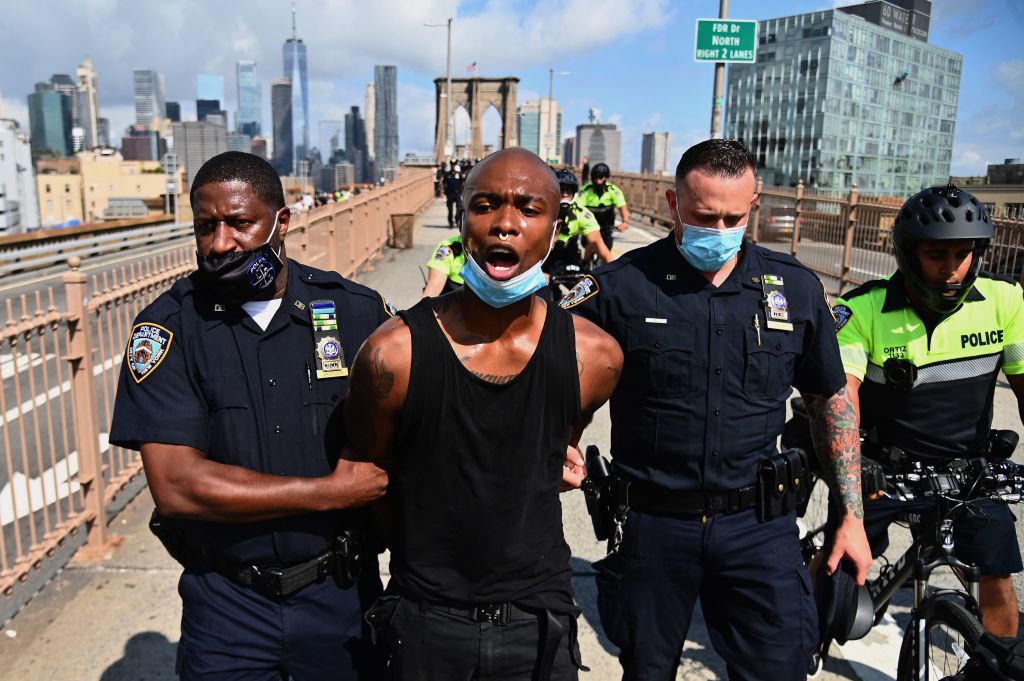 On July 15, 2020, Black Lives Matter protesters got arrested in New York City after a demonstration on the Brooklyn Bridge. 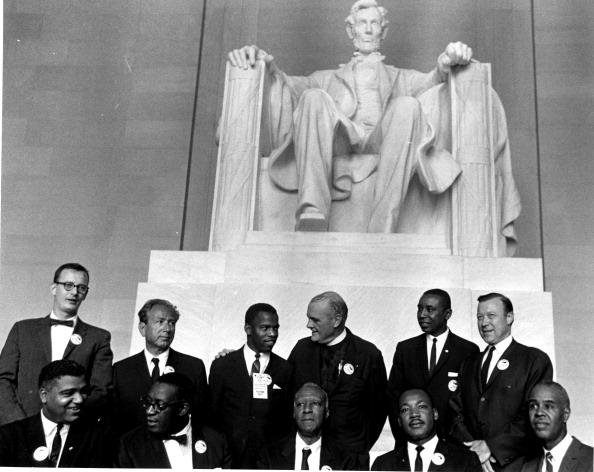 This image depicts Lewis (then the leader of the Student Nonviolent Coordinating Committee/SNCC) along with Dr. Martin Luther King Jr. and others at the famous “March on Washington” posing at the Lincoln Memorial. Known as the “March on Washington for Jobs and Freedom,” the fight still persists for equal and fair treatment of Black people in the workplace. 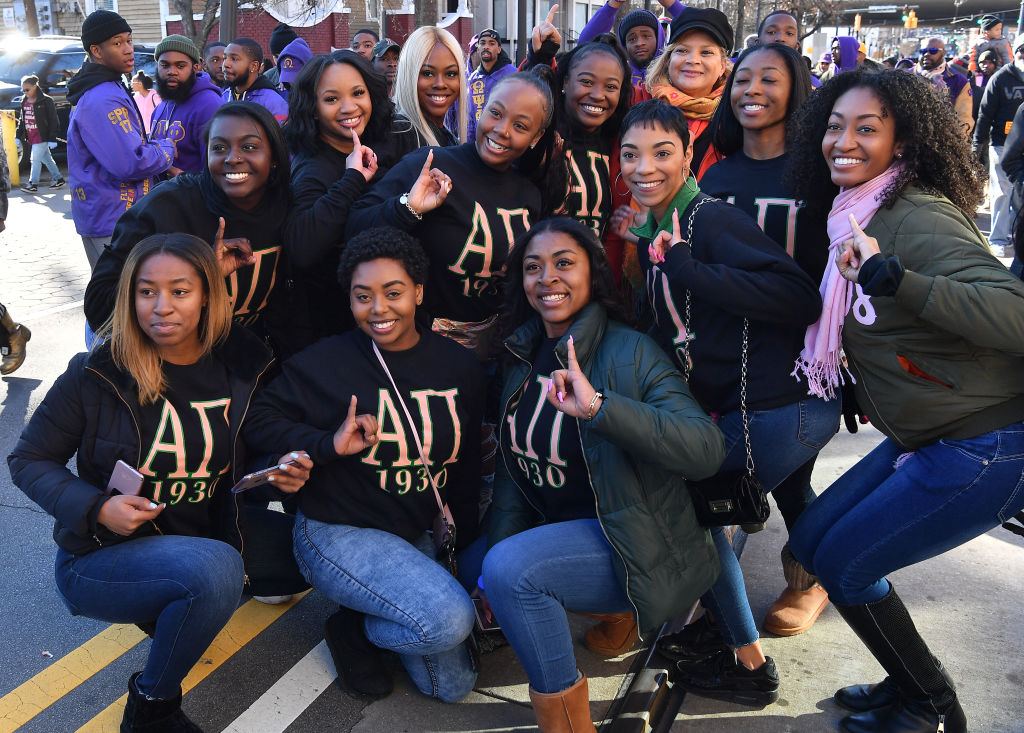 4. The 20th Anniversary of the Selma to Montgomery March vs. Supporters attending Stacey Abrams rally in 2018. 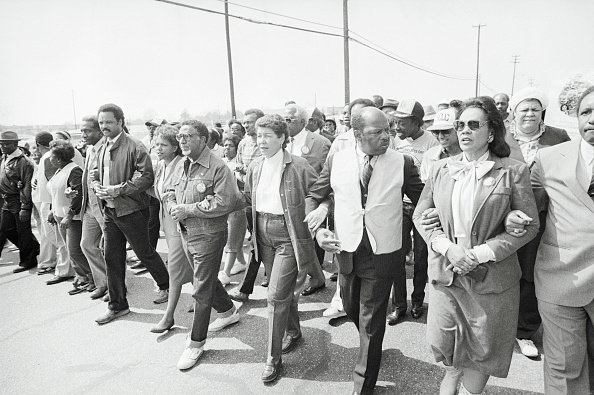 Lewis (then an Atlanta city councilman), Coretta Scott King, Reverend Jesse Jackson and others are shown finishing up the last portion of their 20th anniversary Selma to Montgomery voter rights march. Today in 2020, the fight to end voter suppression amid COVID-19 is alive and well with Black activists and politicians at the forefront. 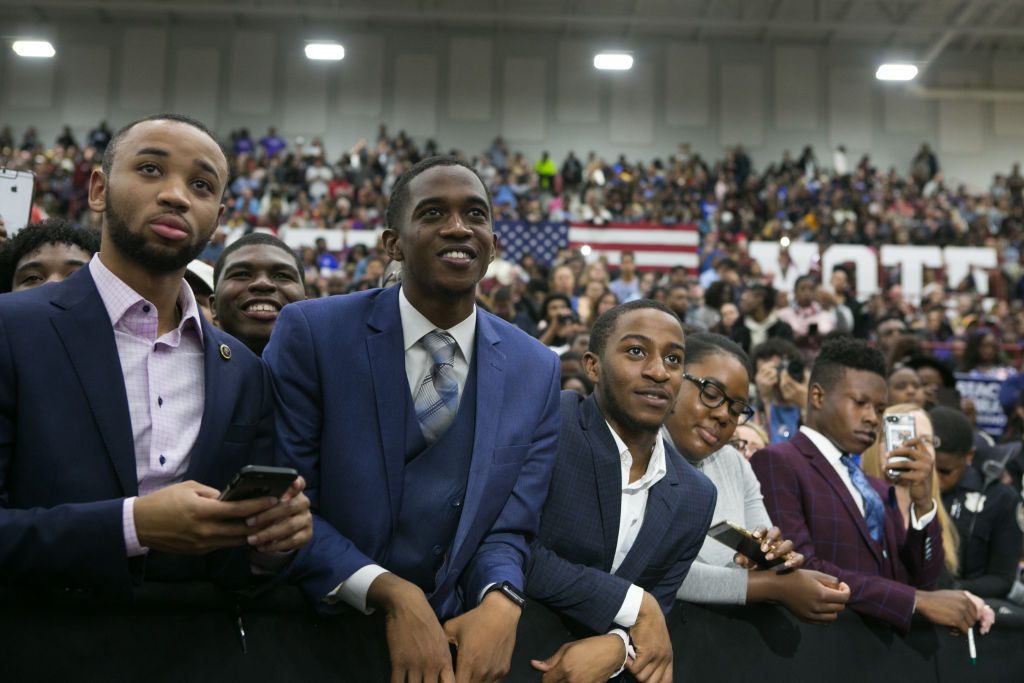 On November 2, 2018, supporters at Morehouse College listened to former President Barack Obama as he spoke in support of Stacey Abrams. Abrams was the Democratic Gubernatorial candidate and is currently a tremendous advocate for voter rights. 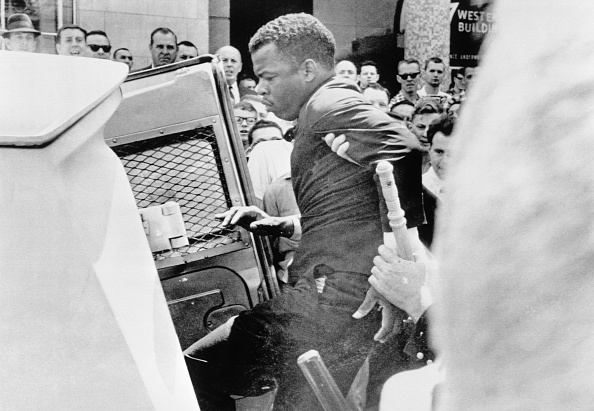 Now the national chairman of the SNCC, Lewis is pictured being arrested in Nashville for a racial demonstration, as white onlookers stare. Does this look familiar? Decades later, the future congressman would be arrested at an immigration rally. His fight for equality transcended generations. 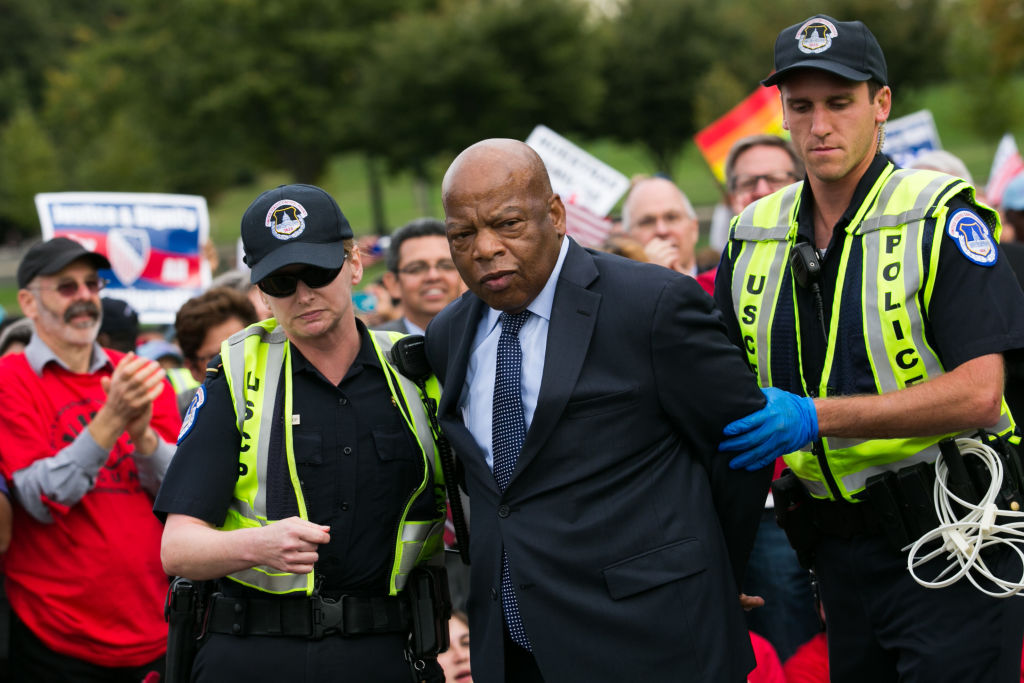 On October 8, 2013, Lewis was arrested, along with other supporters of immigration reform, for blocking First Street NW in front of the U.S. Capitol. 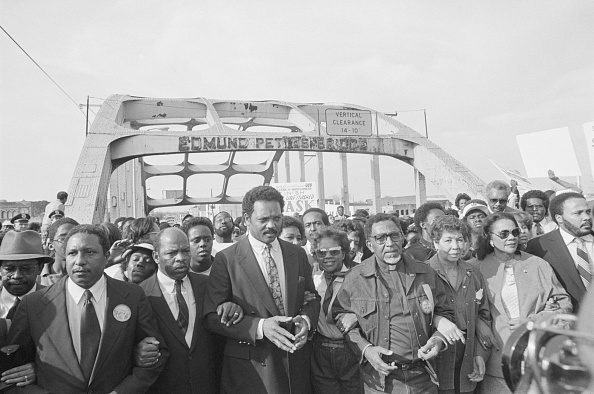 Here’s another image showcasing Lewis and other civil rights leaders reenacting the Selma to Montgomery march for its 20th anniversary. 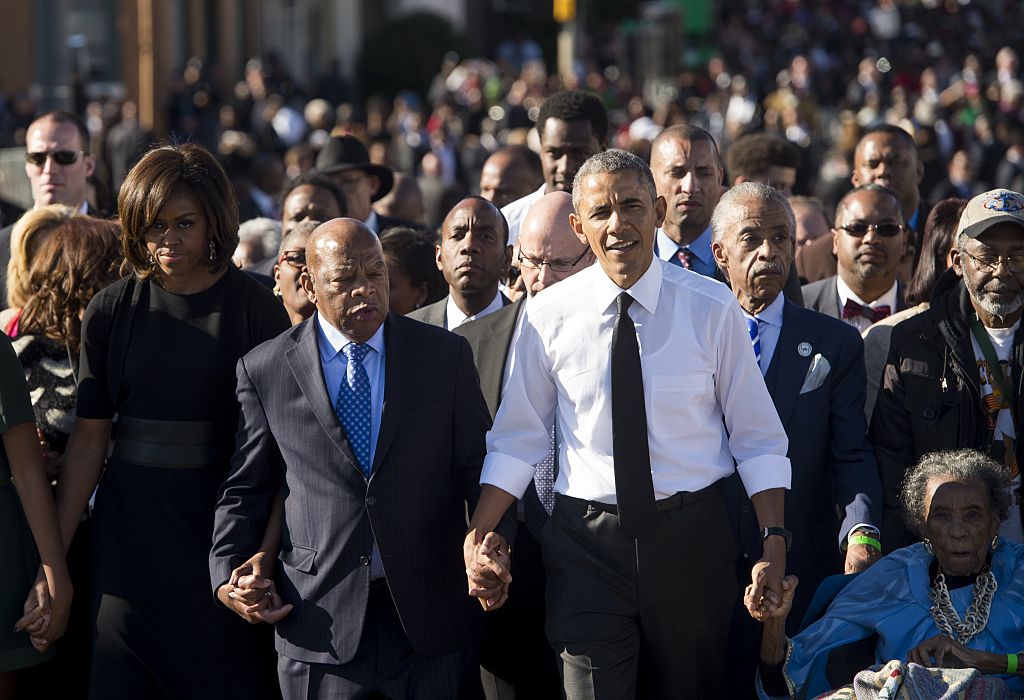 On March 7, 2015, former President Barack Obama marched alongside Lewis and former First Lady Michelle Obama on the Edmund Pettus Bridge to commemorate the 50th anniversary of the Selma to Montgomery march. 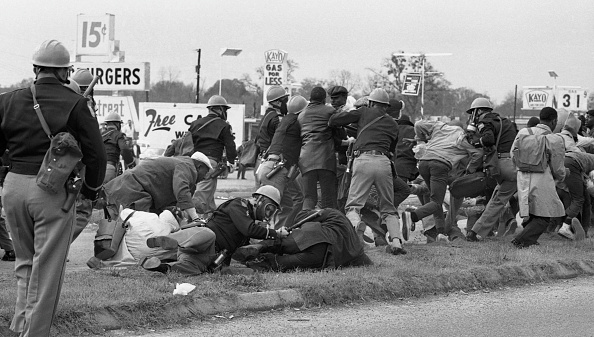 This image showcases police brutality with armed police officers initiating violence during the first Selma to Montgomery march. Civil rights activist Amelia Boynton was knocked unconscious  and Lewis (in the trench coat and backpack) was beaten moments later. With all of the incidents of police brutality in 2020 and prior, unfortunately, it’s hard to pick just one isolated event that this parallels with. 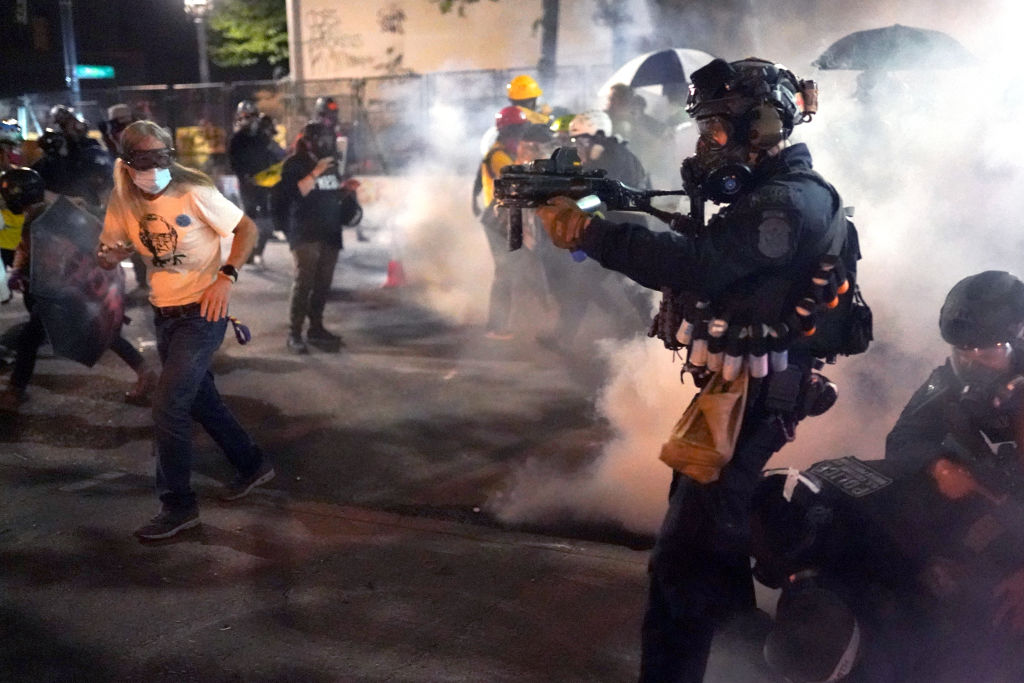 On July 30, federal officers dispersed crowds with gas and "less-lethal weapons" at a protest against racial injustice and police brutality in front of the Mark O. Hatfield U.S. Courthouse in Portland, Oregon.

Lewis was more than a civil rights icon, he was an American hero. These few images offer only a glimpse of the impact that he’s had and will continue to have on the generations to come. According to Ahern, when comparing the archived images of Lewis and the Black Lives Matter protests, the “journalistic endeavor to cover a news event” remains the same, but now there’s more coverage.

“You will have more photographers covering an event or protest, today,” Ahern told Blavity.

When we look at the sacrifices that Lewis and others in his generation have made for us to be here, it’s important that we continue to fight for a better future so that the prices they’ve paid do not go in vain. Whether or not that’s getting in “good trouble,” we owe it to Lewis to keep his legacy alive by continuing to let our voices be heard loud and clear.