Divesting from the Reality Show Movement

Even before I ever saw one episode of The Real Housewives of Atlanta, I was done with the way black people were being portrayed in the media, specifically in reality television. From criminalizing victims of police brutality and murder (see: Michael Brown) to creating polarizing archetypes of black femininity (see: Nene Leakes), mainstream media portrays black men, women, and children in the most flawed light possible and we still watch in droves
Why is this? As we protest police brutality with the #BlackLivesMatter movement and call attention to exclusionary practices with #OscarsSoWhite, why is it that we still buy into the monolithic portrayal of black identity on Reality TV? I used to come to work and have lunch with my black girlfriends, eventually being shut out of the conversation when it turned to the latest episode of shows such as RHOA or Bad Girls Club. No one cared about the reality shows I watched: Big Brother, The Amazing Race and Project Runway. They looked at me as though I was bourgeois and I looked at them as though they were ratchet. Both viewpoints stem from the same problem: the portrayal of black people on reality television is neither complex nor compelling. It speaks to the most basic part of us that we are entertained by it. We're laughing at an amped up version of the girl who rolls her neck and eyes in class at the teacher because we don't know that she's missed breakfast every morning this week. We're talking about how we wish Ray J would finally treat his girl right while ignoring the broken relationships we or our friends are in. How can we continue to internalize the broken parts of ourselves shown in media as the only parts of ourselves? We must demand full reflection 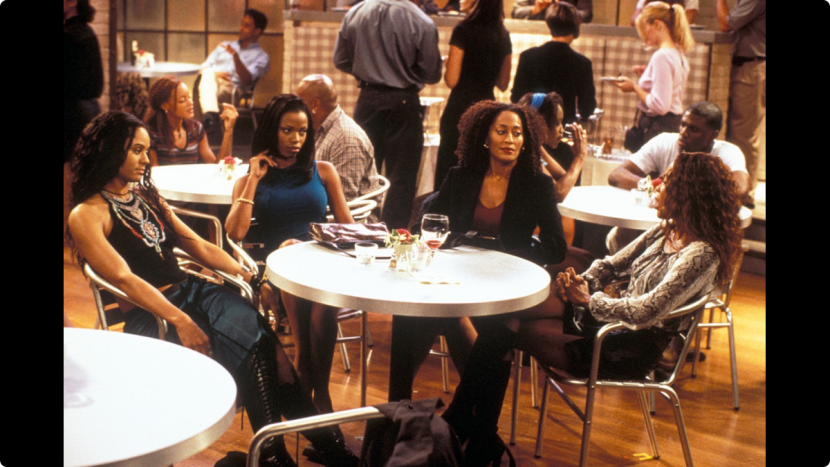 Photo: CitySpeakOnline It's ironic that Olivia Pope or Mary Jane Paul or even Joan Clayton, fictional characters, resonate more with me and my girlfriends than Nene or, at this point, even Kim Fields. I first saw Real Housewives of Atlanta a few months back on a flight from Chicago. I flipped to Bravo, and upon seeing the show on my screen, decided to see what all of the hype was about. My fears and assumptions about the show came to life
Realistically, the title of the show doesn't even make sense — how many of these women are married? Secondly, black women can have meaningful and drama-free friendships! This show continues to send the message that all we can be together is overly aggressive, over-sexualized or painfully dependent on their spouse (if they have one). I sat back wondering why people were so enthralled with whole characters built around one or two characteristics: mean and sexy, crybaby and dowdy, sexy and sexy. I didn't get it. There was nothing worthy of discussing afterward, except my disgust with the show — and this is only one example! What if, in the same way that Jada Pinkett-Smith suggested a boycott of awards shows that aren't inclusive, we turned away from television shows that portrayed us in a singularly negative light? In the same way that we've called for boycotts of Black Friday or Christmas or that we've encouraged each other to invest our money in black businesses, we must invest our viewership in shows that illuminate the depth and the breadth of who we are as people. In a time when many of us are fighting to humanize and legalize blackness, it's important that we not only focus on proper recognition and cooperative economics but on cooperative cognition

Because honestly, I'm not just Nene OR just Olivia — I've got a little bit of both.

Sound off with your opinions on black reality television by sharing this article on Twitter or Facebook below!