The undisputed Queen of Christmas sat down with Blavity to talk all about her favorite season.

Mariah Carey is celebrating yet another Christmas at the top and adding a few more holiday notches to her Santa belt. This year, among major accolades for her mega holiday song and starring in a second Apple TV+ special, the undisputed Queen of Christmas has partnered with McDonald's to launch The Mariah Menu on Dec. 13.

"Yes, Mickey D's, hello! We love it," Carey told Blavity. "Imagine you're a little kid and you're growing up with no money and barely ever having food in the refrigerator, and then you get to do this thing as an adult. I'm like, 'wow, this is so incredible!' It's McDonald's—I grew up with this! I didn't imagine that this would happen."

In a holiday glam commercial that pays homage to the global icon's recognizable holiday hit, "All I Want for Christmas Is You," Carey stuns in a sparkling red evening gown and even closes out the advertisement with a piece of the chain's famous jingle. But while incredibly melodic in her signature rasp, Carey said her Bah–dah, dah, dah, dah didn't exactly come out as she had hoped.

"Honestly, I did that really quick," she said. "I wanted to do a whole like more orchestral kind of vocal thing, but I had laryngitis. Thankfully, it came out OK."

Either way, hearing the top portion of her smash tune while the restaurant lights up to the jingling bells is enough to get in anyone in the holiday spirit, even those who may have lost a little cheer throughout the past couple of years of shared trauma the world has been experiencing.

Fear not, however, the Queen of Christmas has advice for you.

"Honestly, you can't let it go—you gotta hold on to that spirit!" the superstar said.

Every year, Carey gets to celebrate the holidays with her song that won't quit winning, even after 27 years. "All I Want for Christmas Is You" recently hit a billion streams on Spotify, was named number one on Billboard's 100 greatest holiday songs of all-time list and became the first holiday song to ever achieve diamond status.

"It's amazing and I'm so thankful for it because I do love Christmas," Carey said. "At first, I was like, 'I don't really know about this,' writing a Christmas song at this early part of my career. Me and my then writing partner, Walter A. [Afanasieff], worked really, really hard to make [the song] not sound like it was from a certain era."

In 2018, Insider estimated that Carey had earned about $60 million from "All I Want for Christmas Is You," with an annual estimate of $500,000 in royalties just in the U.K. It's well known that the songwriting diva—with her once-in-a-lifetime voice—has amassed quite the wealth from her music. However, as a self-proclaimed perfectionist, she said it took her a long time to just enjoy her smash hit without thinking about every little thing she could have done differently.

"Back then, people had more control over what I did, so if I didn't like a specific ad-lib or thing or whatever, they'd be like, 'keep it, it sounds amazing,' and I'd be like, *sigh* 'OK,'" she said. "It's not that I didn't like it, it's that I had to grow. When I listen to music during the holidays, it's the classics—Donny Hathaway, Nat King Cole, The Jackson 5—it's all the people that I grew up listening to, these incredible records, right? So, I'm sitting here critiquing myself, listening to myself on a playlist with people that I just admire so much."

That aside, the Billboard record holder said it feels incredible to have the song still be so commercially and culturally celebrated.

"I actually love Christmas that much that if that [song] was the only thing that people ever knew," Carey said. "I mean, the Butterfly album, that's everything to me. The Emancipation of Mimi, yes! 'We Belong Together,' of course! Like, I'm not going to go in and name all of my other songs, but I'm trying to say, how can you compete with a song that has done what this song has done? Even those songs as big as 'One Sweet Day,' like, how can you compete with that? You can't! So, the point is, I love Christmas that much and I'm like, well, here it is, and I love it. And, I love it every year and we celebrate it every year."

This year's celebration, of course, is clad in McDonald's signature red and gold and infused with Carey's Christmas spirit.

The Mariah Menu, which features a different free item with $1 purchase each day, begins with the Big Mac on Dec. 13 and ends with chocolate chip cookies on Dec. 24. On Dec. 15 and again on Dec. 21, customers who order through the McDonald's app will also have the opportunity to score either a beanie or a t-shirt featuring a nostalgic photo of Carey during what she called her most memorable moment at the fast-food giant.

"So, we were doing a show a long time ago, and I believe we were in Vegas, and me and Brat [went to] McDonald's and somebody happened to catch a picture of me," the global icon said. 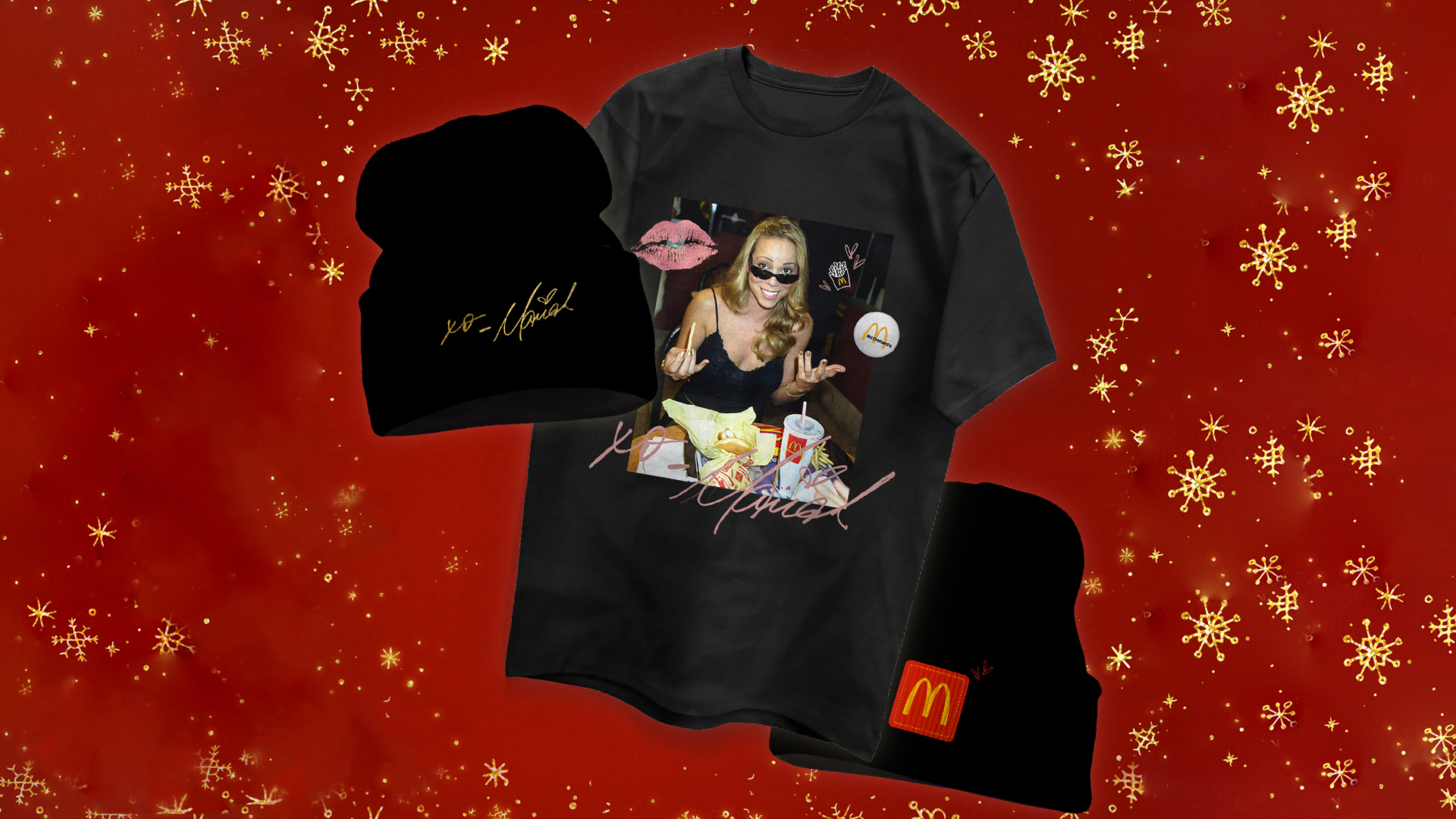 True to her nature, the Mariah Menu items will be served in festive packaging inspired by her style and love for the holidays, a press release noted.

"I think it's festive," Carey said. "Come on, come on, who is more festive than me? Can you name one person?"

Outside of her holiday run with McDonald's, Carey is the face of Mariah's Cookies and Black Irish cream, both filling the world with yuletide. She also starred in Mariah's Christmas: The Magic Continues, a follow-up to her 2020 Apple TV+ special, during which she wore a gown with a 60-pound train to sing her latest song, "Fall in Love at Christmas" with Kirk Franklin and Khalid.