Striving to be more than an athlete was something that was particularly important to the former Northwestern Football standout.

When Dwight White II was a student at Northwestern University, few places made him share a sense of community with other students than his time at the Black House. It was a place where you could enjoy a plate of food nearly as good as your mom’s, and a safe space to freely celebrate Black achievements like former President Barack Obama’s inauguration. White, a Chicago-based muralist, painter and creative consultant, said the Black House often inspired him to reimagine what life on campus could look like for Black students if their needs were being met.

Originally built in 1968 following the student occupation of the Bursar’s Office, the Black House was shut down for much-needed renovations in June 2019. For two years, Black students were without their sanctuary space and many felt closed off from the communities that made them feel safe, Blavity previously reported.

When the doors of the Black House reopened in October, students were welcomed into the Victorian-style house to enjoy its expanded space, gender-inclusive bathrooms, and a mural in the main room painted by White meant to speak to “students on campus who are looking forward to their first experiences” at the facility.

“The Black House renovations have been ongoing since I was still in school,” he said. “It’s an honor. But a huge part of being an artist is having the opportunity to document history. So, having a piece that will be a part of the Black House legacy is something that I’ll look back on and have a sense of pride about.” 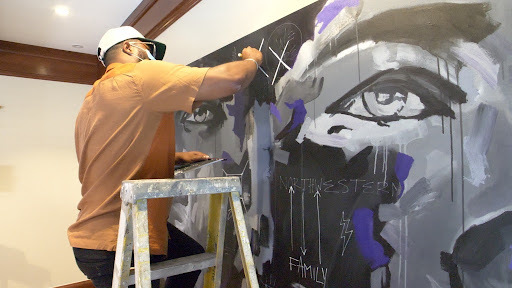 Sophia Simon, a senior studying Communications and member of the Theta Alpha chapter of Delta Sigma Theta Sorority Inc., said the renovations make the Black House feel up to par with other university buildings. She added that the mural is a powerful presentation of America and a much-needed addition to the space.

Before the renovations, the space where White’s mural rests was once a whiteboard often utilized by the many student groups that met there. Samantha Anderson, a junior studying social policy, said the mural, titled "Undivided Legacy," succeeds most in how it represents Black culture and Wildcat pride.  “I really like the use of colors. Even though there are uses of purple to represent the school, there are plenty of black and white colors to contrast,” Anderson said.

White, a former defensive back on the Wildcat football team, describes his style as spontaneous realism — a type of expression that is based on a real concept using spontaneous lettering, characters and coloring based on emotions and thoughts.  “When I don’t feel like expressing myself verbally, art is a way for me to free myself and lean into a sense of creativity,” he said.

As a native of Houston, Texas, White said he grew up in an athletic family and was passionate about football. Although he was always interested in Black life on campus, White said he wasn’t able to experience the community much until he suffered a career-ending injury his junior year.

Without football, the game that brought his family together and opened doors for him, White leaned into his artistic abilities and got involved around campus. He became the chapter president of Kappa Alpha Psi fraternity inc., a board member of For Members Only, and was involved in a program within the athletics department called NU For Life that focused on the professional development of student athletes. The rising artist recalled feeling a strong desire to improve things for people who might come after him.  “You are a small fish in a really big pond when you attend a PWI, or at a school like Northwestern. The thing that I appreciated most was how the Black community prioritized ourselves and found spaces on campus that we felt made us comfortable,” he said.

Recently, White collaborated with Bacardi to expand his local event curation series that introduces audiences to work contributed by artists of color. He started the series two years ago, prior to the pandemic, as a platform to highlight diverse talent.

DeMario Phipps-Smith is a community-centered journalist from the west side of Chicago. He's an avid sports fan and believes Justin Fields will lead the Bears to the promised land. Currently, he is a graduate student at Northwestern University's Medill School, specializing in Media Innovation and Content Strategy.