Why I'm Going Paleo This Year

Last year around this time, I was disgusting. I’m not exaggerating. Most nights, I was binge-eating Wawa mac & cheese with a side of Sweetarts at 1am. Mac & cheese is great, don’t get me wrong—and I love me some Wawa (if you don’t know what Wawa is, trust me, you’re missing out). But after several weeks of doing this, I felt really crappy. My eating habits were out of control.

As an emotional eater, I use food to soothe feelings of sadness and stress. Eating like that was particularly concerning because diabetes and heart disease run in my family—all of my grandparents passed away as result of diabetes, heart disease or stroke. With that type of family history, wasn’t just a problem; it could cost me my life. To top it all off, I felt especially bad about myself as a former cross country runner. I knew better so why wasn’t I doing better?

I was so concerned about my diet that I started seeing the nutritionist at student health services. Around the same time, I reactivated my Instagram account, where I often admired the posts of health-conscious Instagrammers, many of which were Paleo diet recipes. For those who may not know, The Paleo DietTM is a return to primal eating using modern, unprocessed foods to mimic the diets of "our pre-agricultural, hunter-gatherer ancestors." It's effectively a fad diet that requires you to cut out dairy, alcohol, potatoes, bread, grains and processed foods. Vanessa Barajas’ posts were my favorite. Though her recipes were ambitious, they always looked delicious and fun to make. This is when I became fascinated by the Paleo diet. My mom has been low-carb for years and she's super fit. But it hadn't occurred to me to try a low-carb diet myself. I figured going Paleo could be my chance to make long-term adjustments to my poor eating habits.

This all happened last spring. It took me until November to commit to trying the Paleo diet. I knew I wanted to change my diet drastically. My habits were too unhealthy not to change — but my emotional eating had gotten the best of me. In early August, I quit my job. In late August, I moved back in with my parents. In October, I was laid off from a part-time job, something I’d only taken on to earn a little extra cash. Then I failed my driving test in November. The list goes on. I couldn’t handle failing at a diet too. But I had to change something. I decided to take a single, teeny tiny baby step towards going Paleo by asking for a Paleo cookbook as a gift. When I received The Paleo Kitchen for Christmas, I officially got ready to go Paleo. 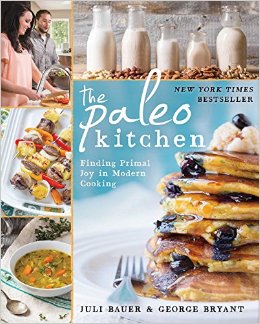 So here I am, finally getting started. I’m determined to make 2016 my best year. Part of being my best self is forming new, healthier habits and remaining committed to them. Going Paleo is hard. I’ve failed at some point every single day so far. But, I refuse to give up on this diet, and I refuse to give up on myself. I hope you will follow along with me as I face the challenges of making this transition.