Presidential debate round 2: Donald Trump vs. Hillary Clinton jabs got uglier than the first

Round two of the town hall presidential debate took place Sunday night, live at Washington University in St. Louis. Donald Trump and Hillary Clinton came to bat after a jarring week on the campaign trail. The results from a CNN/ORC show 57 percent of respondents citing Clinton as the victor, with 34% backing Trump. Instead of starting the night off in a friendly manner, both sides skipped the customary opening handshake.

Their faceoff was more like a cypher, not a traditional debate.

Was this the nastiest #debate in history? Here's a look back at Donald Trump and Hillary Clinton's tensest exchanges https://t.co/WW8TJkSoUQ pic.twitter.com/u2JA6cfzKE

And this duet-like image is the money shot.

YOU MAY SEE ME STARING/ ON CATCH ME IN A DAZE/ MAY SEE ME HANG MY HEAD/ WHEN YOU COME MY WAAAAHAYYYYYY pic.twitter.com/wrfFue9zGy

I'm sorry that you / Seem to be confused pic.twitter.com/0ZMObiqikD

The moderator addressed Trump asking, “Your running mate said this week that the Muslim ban was no longer your position. Is that correct, and if it is, was it a mistake to have a religious test?”.

Trump responded, “First of all, Captain Khan is an American hero. And if I were president at that time he would be alive today. Unlike her, who voted for the war without knowing what she was doing, I would not have our people in Iraq. Iraq was a disaster.”

Tensions weren’t just ugly on stage, the debate, of course, took a turn for the worst on Twitter. Clinton’s foreign policy spokesperson, Justin Lehrich has since apologized for his vulgar tweet to Donald Trump. 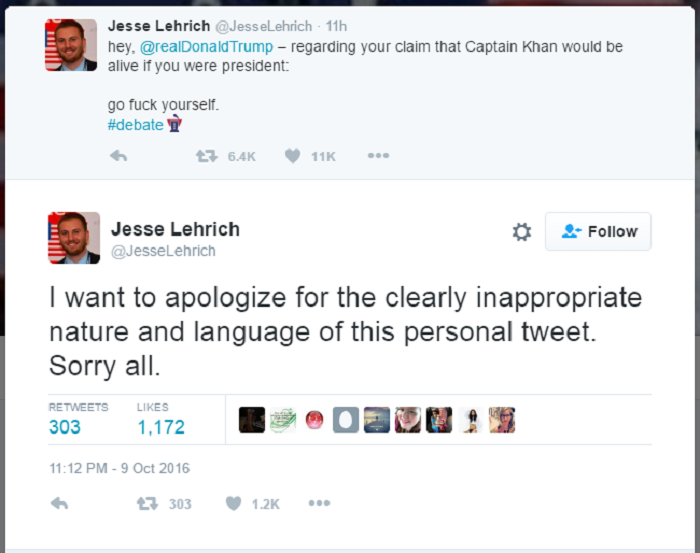 Surprisingly, but not surprisingly, Trump apologized for his obscene comments recorded in 2005 with Billy Bush about his ability to make unwanted advances on women because of his prominence.

Despite the sincerity or lack thereof, Clinton says the tape only exposed “who Donald Trump is.”

“We have seen him insult women. We’ve seen him berate women; on their appearance, ranking them from one to 10. We saw him after the first debate spend nearly a week denigrating a former Miss Universe in the harshest, most personal terms,” Clinton said.

But of course, the apology was short-lived. Trump used sexual assault claims against former President Bill Clinton as a way to strengthen his argument against the former First Lady.

“If you look at Bill Clinton, far worse, mine are words, and his was action. His was — what he’s done to women, there’s never been anybody in the history of politics in this nation that’s been so abusive to women….Hillary Clinton attacked those same women. And attacked them viciously, four of them here tonight,” Trump said.

This man in the audience really described everyone’s feelings about the debate.

I think this dude just flipped to "decided voter" pic.twitter.com/h6WRytOhEs

me every time donald opens his stupid mouth: pic.twitter.com/Ghgve6lhUo

Me too brother me too pic.twitter.com/4Mtn9qyz9v

At the end of the 90-minute debate, Trump ended on a complimentary note.

The third and final presidential debate is scheduled for Wednesday, October 19th at 9:00 p.m./EDT.

Never miss a headline. Sign up for Blavity’s daily newsletter.