Tiffany Davis is the perfect blend of #BlackGirlMagic and Rocket Science

Tiffany Davis is a name you definitely want to know because we can bet you will hear more about her as she delves into the aerospace engineering field. Davis is set to graduate next month from Georgia Tech and has set the Twittersphere ablaze with her hashtag: #YesImaRocketScientist

It seems all her life Davis knew that she wanted to be an engineer of some sort.  “When I was 11 I asked for a circuit board for Christmas because I thought it was cool that this board could play such a huge role in how something works,” says the 20-year-old Washington, DC native. 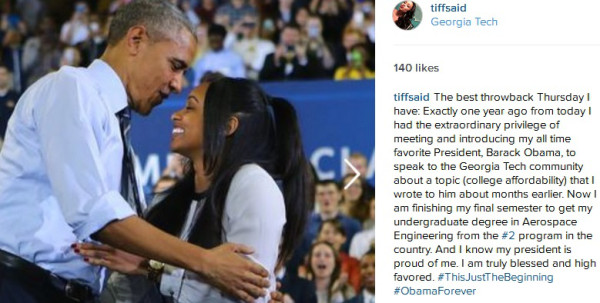 Photo: Tiffany Davis / Instagram Boeing’s Engineering Accelerated Hiring Initiative accepted Davis as one of their selective students and she has worked with them ever since. Based on one of her Twitter posts, Tiffany may continue to work with them on some projects post-grad


Just talked to my mentor at Boeing 😁. Super excited for my projects — Tiffany Nicole (@TiffSaid) April 8, 2016

Congratulations Tiffany and we cannot wait to see what you do next!

READ NEXT: Tracee Ellis Ross gets in "Formation" for Black Girls Rock