When I saw the trailer for Spike Lee’s forthcoming joint Chi-Raq I felt vindicated. The film, borrowing its name from a pseudonym the city gained for its violent reputation, has been met with mixed enthusiasm. When it was announced earlier this year, people from City Hall to the hood questioned the naming of the film. City Hall wondered if it would be a film that damaged the city’s tourism and commercial efforts. The hood wondered if it would it be a movie that trafficked in more of the same stereotypes and broad brushstrokes about what keeps black folks from being able to behave like decent people. The hood feared another story that positioned itself as an authority on how to fix without accounting for the nuances, histories and divestments that created the conditions in these neighborhoods. I feared the unshakable corniness of a writer/director that hasn’t put together a solid narrative film offering for the better part of a decade.

I can’t for certain say what the movie does but I can say I bet I’m right. I can also say that when it comes out I’m bootlegging that joint and I suggest you do the same for the following reasons:

1. The ham-fisted treatment of women in the story of Lysistrata brought into a contemporary context is concerning.

I understand the story of Lysistrata. I think it's an interesting and in some ways really brilliant example of classic Greek comedy. I also think it's some shit no man on this side of 300 BC should touch with the idea of “re-purposing.” As an artist and as a hip-hop cat, I appreciate what it means to sample, re-purpose and re-appropriate. Such notions are particularly important when we’re talking about reimagining a canon for art that isn’t limited to old dead cis straight white dudes. There has to be something subversive about the most notable black director of all time taking this story and in doing so thumbing his nose at the pillars of Western civilization. Right? 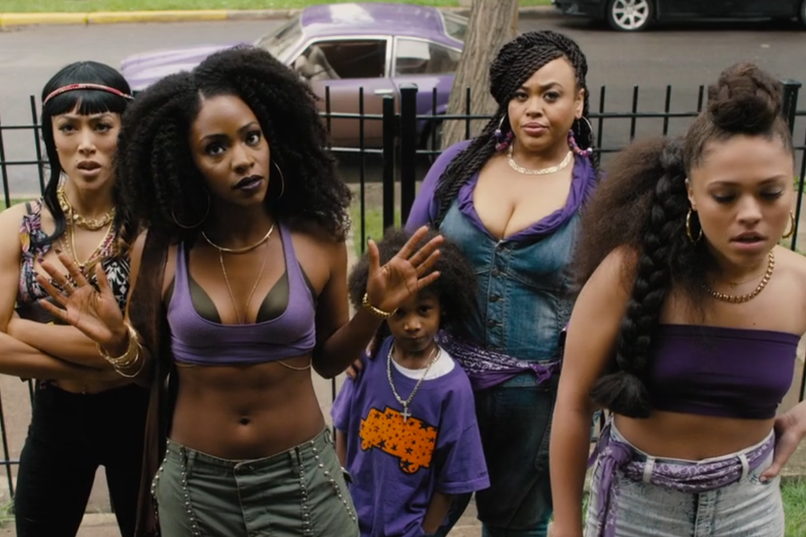 Not really. Spike is, for his many positive attributes, still a man. That means he operates with the wind of an oppressive history in his sails. That means that he can’t really reclaim a sexist image and make it an empowering one — art be damned. Just like how I would have been super pressed if a white writer/director was the driving force behind the movie Bamboozled. Authorship matters and images matter. I don’t see how this movie, given the premise and the trailer, avoids being yet another piece of art that builds its “edginess” at the expense of demeaning and dehumanizing black women by reducing them to a series of organs that men want. I think a man at the helm of this film makes a difficult proposition an impossible one.

2. The dispossession of people’s grief isn’t an art project, its cultural gentrification.

Spike Lee, more than many folks, should understand the trauma of gentrification. We’ve heard him talk about the wrong of newcomers to his home borough of Brooklyn feeling more entitled to their silence than to his father’s cultural expression. How can he then feel more entitled to his commerce than to the real grief of real Chicagoans who are living in places where the violence is not a plot point? This disappoints me so much. People really feel the grief of losing a loved one or a neighbor in this city. People really feel the fear of being not far off from a similar fate. People feel the anger and frustration of helplessness as problems they did not create ravage their communities. I feel all those things. To consider those real feelings as a space for story development is erasure. It is building a luxury condo on the graves of Tyshawn and Hadiya and Derrion and countless others. 3. The opportunistic naming of this film is Willie-Horton marketing.

Dog-whistle promotion. Welfare-queen advertising. This movie doesn't carry this name because it speaks to specific issues in the real places of Chicago that might constitute a "Chi-Raq" (that’s not the whole city, ask any Chicagoan). This movie carries this name as a gimmick, a race-baiting that trades on the public imagination’s worst notions of what and who black Chicago is. There might be some payoff to this (though I doubt it after seeing the trailer) but to this point it looks like a shameful and un-ironic publicity grab from an artist who should know better.

4. You can’t have a conversation in good faith with a community you don’t love, know AND understand.

I fear Spike Lee has forgotten the power of many of his early films. He was writing about people and communities that he knew and loved. He had insider knowledge of the history and context of those communities and he brought that care and intellect to movies like Do The Right Thing or School Daze. To step into the narrative world of Chicago and assume either that you know what that means or that it doesn’t matter that you don’t, is troubling and a betrayal of the genius of Spike Lee.

Did y’all see Da Sweet Blood of Jesus? I’m not saying that it wasn’t a gutsy move to remake a film with such a particularly strange story line, but dang Spike. The combination of bizarre story and jarring narrative decisions made for an utter fail. It’s like a great player who is clearly past his prime and kind of sad. Clearly this is a dude who had game. Clearly this is one of the greats. Clearly this is a cat who needs some support that he just isn’t getting. Clearly this is a train wreck. Clearly this is me watching my childhood favorite play himself into being a punchline.

The reason all of this troubles me is because I love Spike Lee. Despite everything. Despite an uneven catalog and a tendency to not listen, I love him. Despite rooting for a miserable franchise such as the New York Knicks, I love him. I want to trust Spike Lee to tell an important, powerful story about my home but I just can’t right now. And I understand the major pitfall of writing this review-that’s-not-even-a-review because I haven’t seen this movie. I get it. I want to be generous to Spike Lee and to his demonstrated genius as an artist, so I’m reserving judgment on the movie in full. I’m just bringing up the mistakes that have already been made in the making and marketing of this film and pointing toward what those things might be symptoms of. I will still see the movie and if it elevates the conversation in an unexpected way I’ll support it and encourage others to do so. But until I know it does that, I’m not giving any money to what seems to be an example of misguided, incorrect storytelling from an outsider who should know better.

That’s why I’m looking for a high quality bootleg. I want to have my faith restored, but until then I’m not paying $10 for a movie downtown to have my hometown insulted.

Now who got it for cheap?

Nate Marshall is a Visiting Assistant Professor of Creative Writing at Wabash College, author of Wild Hundreds from University of Pittsburgh Press and editor of The BreakBeat Poets: New American Poetry in the Age of Hip-Hop from Haymarket Books. His new album Grown can be heard here.