After Launching #WakandaTheVote, These Black Activists Kick Off #WrinkleTheVote To Increase Voter Registration

There's no stop to their activism.

There will be no stopping social justice advocates Kayla Reed, Jessica Byrd, and Rukia Lumumba, who launched the Electoral Justice Project in October.

The EJP is a branch of the Black Lives Matter movement and serves to fight for the advancement of black people in America. Following the success of their #WakandaTheVote campaign, which we exclusively reported about on Blavity, the powerhouse leaders are gearing up for the #WrinkleTheVote campaign focused on increasing voter registration at screenings for Ava DuVernay's highly anticipated film "A Wrinkle In Time," which dropped in theaters everywhere on Friday.

#WrinkleInTime premieres next Friday and I literally cannot wait! Today we launched #WrinkleTheVote, the second voter registration initiative of the @mvmt4bl. #BeAWarrior in your community & organize a registration drive for opening weekend! pic.twitter.com/EBl2ESUele

Because of peak national anticipation for Black Panther, the founders knew opening weekend would draw a large crowd of African Americans. Their goal was to cultivate the excitement into political actions–and it worked. The #WakandaTheVote campaign created more than 120 registration drives in February, during Black Panther screenings, and several more are still taking place in March.

The Electoral Justice Project hopes to continue their success with their #Wrinklethevote campaign.

"We believe that families will be at the movies and a lot of young adults who read this book as a child. The state of our democracy must be an inclusive conversation because it impacts us at every age," Reed told Blavity about the #WrinkleTheVote campaign. "We plan to register parents, teachers, babysitters while also exemplifying how young people can be engaged in the political process. We also know that children continue to be at the forefront of our movements and are currently leading an important conversation about gun violence. As they become adults we want to make sure they understand all the tools at their disposal to bring change to their communities and our society at large." 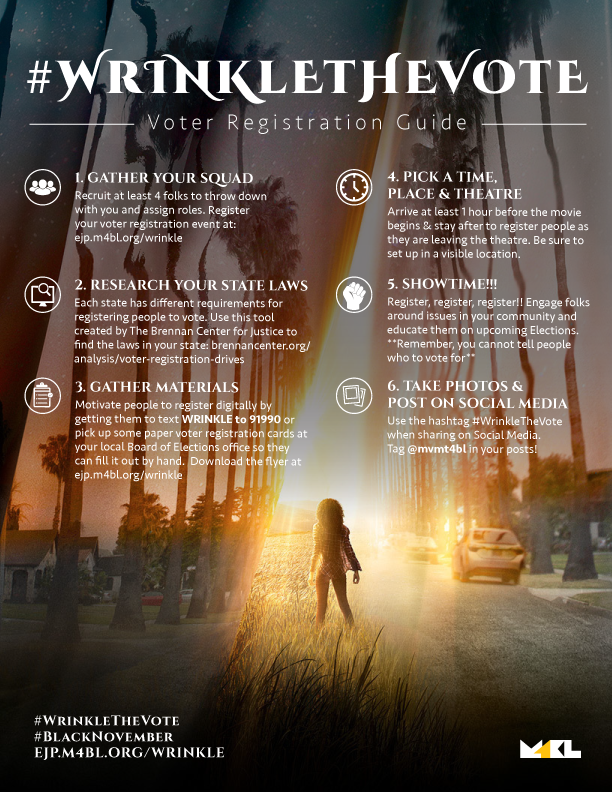 A Wrinkle In Time stars Oprah and Storm Reid; it takes place in a mythical world, where the main character travels through time and eventually saves the world. It's dope to see black people on screen, taking on incredible feats — and if more dope to see us engage in political action while we're at it.

The #WrinkleTheVote campaign, comparable to #WakandaTheVote, is simple and encourages moviegoers to register to vote during the opening weekend. All you have to do is text Warrior to 91990. Get out there and #wrinklethevote.