I recently caught up with the show creator, Damilare Sonoiki, a Harvard ‘13 graduate and staff writer on the hit ABC sitcom Black-ish. Check out our interview below, where Damilare shares the inspiration behind African Booty Scratcher, how he landed the role as a staff writer for Black-ish, why it’s important for us to continue to tell our stories and his hope for the series’ future.

Rana Campbell: What inspired you to develop  African Booty Scratcher and launch on YouTube?

Damilare Sonoiki: The way you get a writing job is usually you write something, somebody sees it, and they want to meet with you to write for their show. I needed a new sample. I thought a good pilot to write would be about growing up in an immigrant house because it’s something I knew very well. We  were coming up on a hiatus for Black-ish. I would have a lot of free time and needed something to work on.

Before, you would have to go a gatekeeper...maybe your agent or a network...with your script and say “I have a script idea for a TV show.” They might say, “We’re not sure if this is something that people want to see.” Nowadays, the internet provides instant global distribution. It’s a lot cheaper to shoot now. You can shoot a prototype and put it online and use the response to show that there is a market and audience for what it is that you are trying to make.

If I’d written this script and sent it to my agent, they would have said that it was a good sample and that they would use it to get me a job somewhere. By putting this online and given the response, it’s like this isn’t just a good sample. It’s something that people want to see on television. I wanted to use the views and the Kickstarter to show that there is demand.

RC: Why the name African Booty Scratcher? What was the filming process like?

DS: I started writing the pilot and trailer around February. It took a little bit of time to write the pilot. Black-ish wrapped writing on March 4th. I gave myself a week after wrapping and said I would shoot it the following Saturday. I shot it that Saturday and started editing. I started sending early cuts to friends for feedback and they all said that it has potential to be really funny but the dad’s accent is really bad. When I had a table read in my apartment, his accent stood out to me then. I said there are a few other people who are NIgerian and they aren’t saying anything...maybe it’s just in my head. I blocked it out.

I have that joke about Will Smith [in the beginning] so to have someone whose accent was not authentic would have been tough. I really didn’t want to reshoot it but as we were doing more...it became clear. The accent was all I could hear. I reached out to [a different] and asked him if he could come in and do the audio. I had him go in and say all of the dad’s lines in a way that we could match it. I really didn’t want to reshoot. I’d have to pay more money. We shot it in a day, but it was a long and draining day. So, we did the dubbed version and we had an editor match it up. After a few times of watching that version, I didn’t [feel right]. You can tell. One of the editors said it looked like a Kung Fu movie and that I should just go with the original version.

I thought that I might as well reshoot the whole thing. A friend of mine who worked in music told me, “Do you know how many times we shot music videos that we never aired and scrapped it because it wasn’t good enough?” I said that I’d be on my Kanye West and make it perfect. There was no deadline, but it was like I was rushing toward a deadline. I could release it whenever. I reshot it on April 16th. The reshoot was actually good. Since I had already shot an edited version of it…it moved a lot quicker because we knew exactly what we wanted. We were able to move through it faster since we knew what we needed. We launched it on May 5th.

RC: You have a $30,000 fundraising goal on Kickstarter. What will you be using this money toward?

DS: I think I’ll use it for more promo and to shoot a mini eight-minute episode. We hit $10,000 after only a few days, so I think we’ll  hit our goal.

RC: What are your ultimate goals for the show?

DS: The goal would be for African Booty Scratcher to get on a major broadcast network like CBS, ABC, NBC or FOX.

RC: What has the reaction been like so far?

DS: It’s been really interesting. People have really responded in a way that is more than I could imagine.

RC: What did you learn about what makes a quality show by being a writer for Black-ish?

DS: Kenya Barris, the creator of Black-ish, has this saying, “Never stop telling your story.” If you look at so many shows, it’s the creator’s story, the creator’s comedy, the creator’s pain...whatever the creator went through. Black-ish is very much Kenya’s story. A lot of semi-autobiographical stuff is what is succeeding. So some things I’ve learned are: Make sure everything that I use is something that I own. Treat it like it’s the show. For Black-ish, every piece of music we have to clear. I could have tried to use a WizKid song...but I wanted to make sure everything in African Booty Scratcher was original music.

There’s so many things I learned in the writer’s room. Someone had a quote where it’s like, “If you laugh a little bit throughout and you feel something at the end...that’s an episode of television.” You always have these heart-to-heart moments at the end where the characters grow and learn. In African Booty Scratcher, even though it’s a trailer… at that little moment at the end where the parents are like “An 89 every once in a while isn’t so bad…” [is an example of that.] You still want to undercut that moment with a joke. “I guess I can stop saying Harvard or nothing so much...I heard Stanford is a good school.” That was something I thought of the day of on the first shoot...you want to have a sense that the characters have grown. 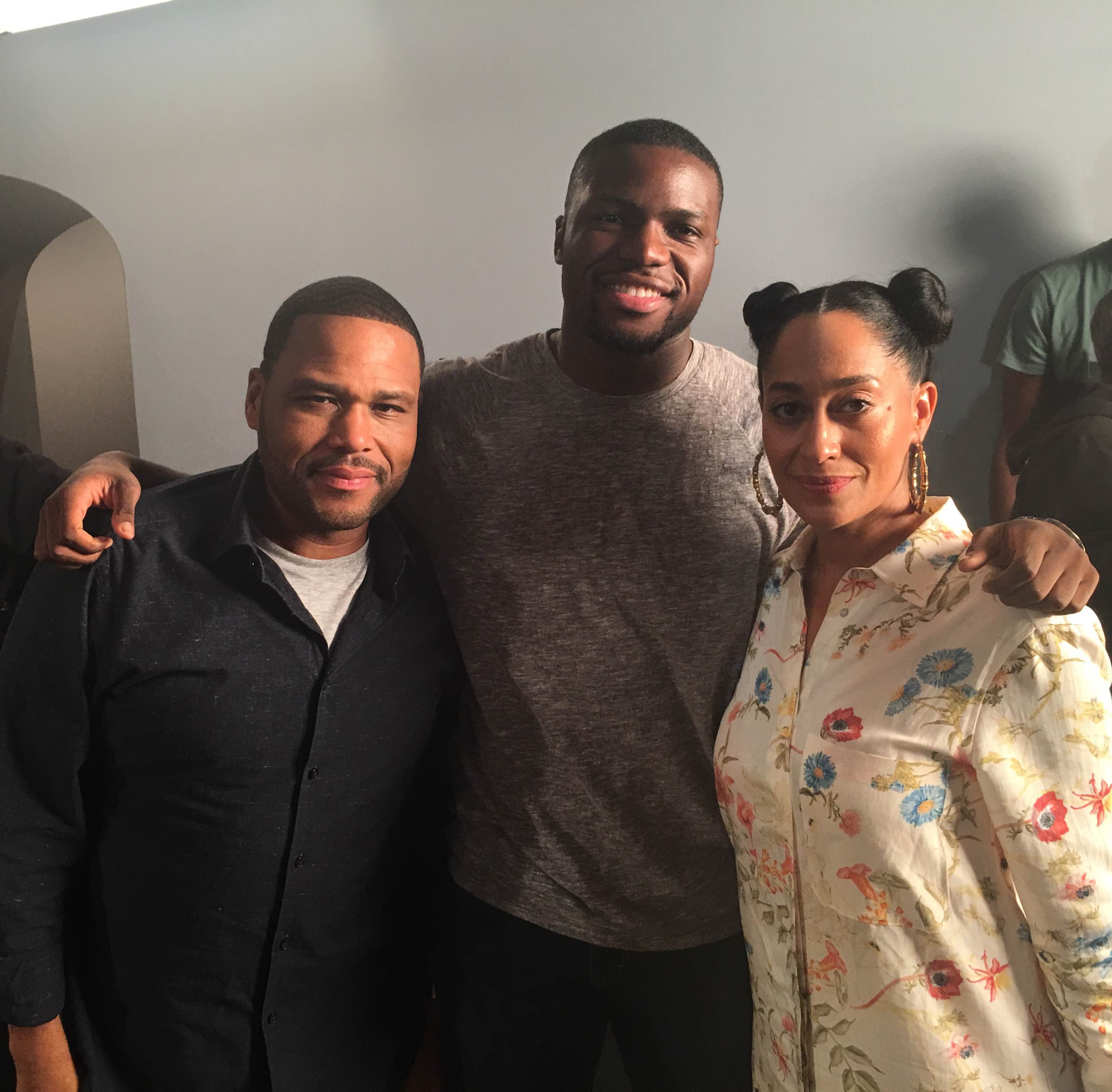 RC: Why did you focus on the Nigerian immigrant experience in America? Why do we need these type of stories?

DC: It’s always refreshing to look at something and see [your] story on TV and know that you’re not the only one. It lets people know that this is something that other people can relate to and went through, too.

RC: Do you think comedy is a good way to tell our stories?

If you look at the episode on Black-ish about police brutality…. Why not? I think comedy allows you to sneak in messages in a way that is not heavy-handed.

To listen to more of Damilare’s journey as a writer and show creator, check out his interview on the Dreams In Drive podcast.

READ NEXT: 16 predictions that could totally happen in 'Black-ish' season 3