On black women, daring to stand tall in the face of white supremacy

There is beauty in the strength and grace of the black woman. When we need her the most she puts us on her backs, standing tall against those who threaten our existence. She is a nurturer, a natural protector — a heroine who doesn't need a cape
Ieshia Evans epitomizes this black woman. The photo of her poised body looking onward onto her oppressor as her dress danced on that Baton Rouge street is more than just a moment in time. It is the state of existence of the black woman
As black women, we face a double-edged sword of oppression. We are everything that the white man is not. Our skin is bathed in melanin. We birth children and we do not hide behind the mask of privilege as we have none. We are strength in the face of power
There is no coincidence in the fact that two women, two worlds apart, Tess Asplund and Ieshia Evans, so similarly found themselves asserting their black womanhood as they stood across from the symbols of white power in their respective countries. For Tess in Sweden, it was the Neo-Nazis of the Nordish Resistance Movement, who are known for targeting anti-racists. For Ieshia in the United States, it was police officers who so often end up killing unarmed black men. The power that comes with whiteness transcends country lines, as does the strength of the black woman

This narrative, however, didn't start with Tess Asplund and end with Ieshia Evans.

When I first saw the picture from Baton Rouge, I couldn't shake it. I immediately thought of Tess Asplund, as did many others and knew that these two moments were only glimpses into the state of being that is black womanhood. A probe into the matter brought me to the iconic moment that we first learned of in elementary school when studying the Civil Rights movement — the Montgomery Bus Boycott
On December 1st, 1955 Rosa Parks dared to sit in the front of the bus, where only whites were allowed 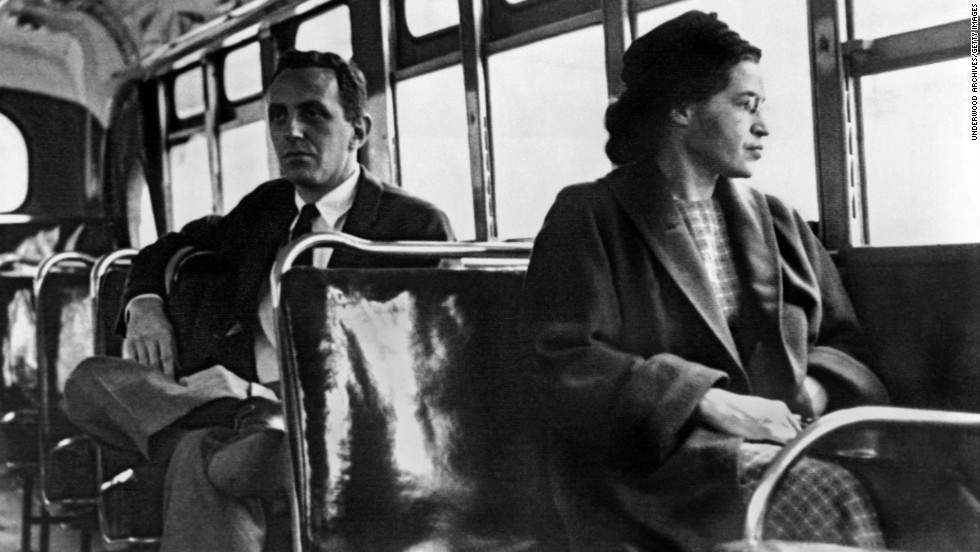 Photo: Underwood Archives/Getty Images The infamous picture of the boycott shows Parks juxtaposed against a white man. She sat there, unbothered. Her strength prevailed through her resistance, quite similarly to the actions that Tess Asplund and Ieshia Evans would take 61 years later. The power that comes with whiteness transcends time, as does the strength of the black woman
Yet again, it does not end here

Across the United States, black women are taking to the front lines in the name of #BlackLivesMatter.

Video after video surfaces of enraged young black women shouting at police officers during protests throughout the country. Here they are not still but they are not silent and their strength cannot be denied. In fact, their words echo the feelings that were catalysts for the defiance of Evans, Asplund and Parks, each woman miles apart in time and space
"There is blood on these streets sir. Why are we going to continue being peaceful when they are killing my brothers and sisters?" —Baton Rouge, Louisiana

"I'm tired of these funerals. Of this blood. On these streets. On our streets." —Oakland, California "I need one answer. There's so many cops out here, but zero answers." — Rochester, New York

This is needed to clarify previous video. This is what happened before the woman was arrested while we spoke w/ her pic.twitter.com/BRoOQzd4Xd — Tara Grimes (@TaraTWCNews) July 9, 2016

When it hits home and the pain is too much. This came from the ❤️#AltonSterling pic.twitter.com/znCpEChkDr

"Why is our skin color a weapon? What did I do to y'all?" — Oakland, California

These are carefree black women sparkling in the kind of black girl magic that moves mountains.

But, do we have any other choice? We are at an institutionalized disadvantage that can only be overcome through perseverance and the strength that comes from being suffocated at the hands of our oppressors. The double-edged sword of being both black and a woman is no longer a weapon that can be used to cut us down. We've taken it for our own and are using it to fight our way to true freedom
"Black women are made out of brown sugar, cocoa, honey and gold. And the strength of ten thousand moons." — Unknown

Want more from Kadisha? Sign up for Blavity’s daily newsletter.