Four years ago, I remember my first time watching Janelle Monae perform live at an event during the Democratic National Convention in Charlotte. In June of this year, I watched her rehearse the morning of the BET Awards ahead of her spectacular Prince tribute and just like four years prior, she poured her heart onto the stage. Janelle's eleclectic style and vibrance is practically impossible to ignore. Audiences have watched her soar to great heights over the years through music and artistry. Yet, we've only experienced a fraction of what she has to offer.
I had the pleasure of interviewing her this week and her heartfelt words are just as dynamic as her exhilarating mark being left on this world. We touched on her spectacular success, her exploration into acting and why everyone should see the upcoming film, Hidden Figures.


On her exciting journey as an artist:

"It's been electric. It's been unpredictable. I would not have been able to map out the things that the universe, God the creator has allowed me to do and see. I feel honored and humbled to be just a piece of a larger fabric, a quilt that this world makes up. I feel like my purpose is to continue to uplift, to always highlight and inspire and try to encourage women, women of color to know that their dreams are valid. There are so many people who I am inspired by that enjoy my music," Janelle said. "I try to align myself with films, with music and with performances that encourage and inspire those individuals who need it, including myself."
Janelle debuted her acting chops in the critically acclaimed film, Moonlight which is currently in theaters

On what drew her to Moonlight:

"When I read the script, I was blown away. The director Barry Jenkins and Tarell Alvin McCraney, who wrote the play that inspired the script, did such a phenomenal job just pouring out their truth. And I was so moved that I was in tears multiple times reading the script. I said, 'Finally we're going to have a conversation in film about the young black gay male experience.' As a woman of color I have friends and family members who are a part of that black gay male experience and I think it is so important. All I could think about were the young boys who may be afraid to come out or maybe did come out and is ostracized from their community because of their sexual orientation or identity. That young boy walking in, sitting in that theater. Maybe he felt alone before he saw the film but afterward he wouldn't feel so alone. Maybe he would finally feel represented and included in the American story."


On her passion for both film and music:

"I went to the American Musical and Dramatic Academy out of high school. I was a drama student, I was in the acapella choir, so I've always done both. I've never considered myself to be just a singer or musician or just an actor but more so an artist storyteller. I love and I enjoy telling untold human, universal stories in unforgettable ways. I always felt that I had room to do that with music and through film. I grew up writing screenplays and short stories."


On her future journey in film:

"I have a lot of exciting, big ideas as it pertains to the film world and music world. I'm excited about my future and I'm excited about the future of cinema and the future of young women who are writing screenplays and directing and producing. I started an organization called #FemtheFuture and it's about advancing the careers of young women in film and in media and music. It's a grassroots movement with progressive millennials and we will absolutely send the future of music and film beyond."
Janelle stars as Mary Jackson, the real-life engineer and historic maker at NASA. She alongside Taraji P. Henson and Academy Award winner Octavia Spencer deliver the untold story of the African-American mathematicians who were pivotal in launching NASA’s early space program 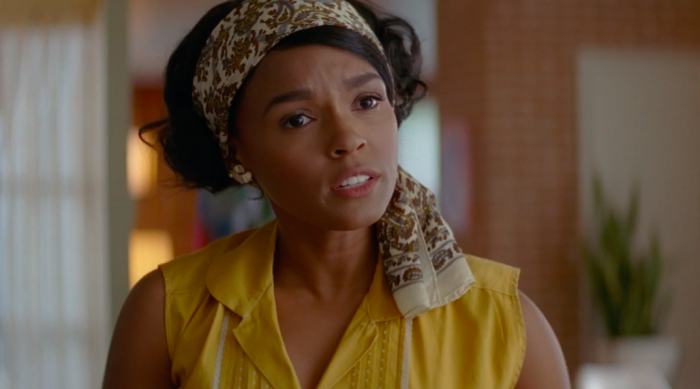 
On her portrayal of Jackson in Hidden Figures:

"It was my dream role. When I read the script, I said, 'Wow. This is the role that I have been waiting on.' When you think about the '60s and the segregation era, people were saying 10% of what they were thinking. They could be lynched. Be hung. They could be murdered. They could be hosed down and nobody would do anything about it. And what Mary was able to do was speak up for a generation who was upset about the discrimination and racism. Mary, however, was not going to sit back idly and allow anyone to discriminate against her because of her race or her gender. Two things that she couldn't change and two things she wouldn't change, if she had the opportunity. She was proud to be a black woman. I was excited to play a feisty, brilliant mind. She wasn't just a pretty woman with a mouth, she was smart. She became the first African American female engineer at NASA. She changed the face of the engineer. An engineer was usually a white male. Here you have this outspoken black woman who came to NASA and she shook things up. She was a revolutionary and you got that from her consistently throughout the film."


On the impact of the film for audiences, including young women of color:

"For me, these women are my superheroes. I think we have heard and seen some of the same stories recycled and regurgitated. This is fresh. We get the opportunity to be inspired by new women. These women went through obstacles. They didn't have it easy and I think that all of us can relate to that. None of us go through life in a perfect world. Please show me a person where that is the case. But, as I speak to young girls and women, we're constantly told that because we're women we can't do this or we're fearful because we don't see a lot of women in those fields, STEM in particular. These women now will have context. People will now look at them as cooler than before. You have women like Mary Jackson, Katherine Johnson, Dorothy Vaughn and so many women who made it look like the coolest thing in the world to send a man to space and to become an engineer or to teach women how to work the IBM computers. That's what those women did and now I think that brilliance is going to be even more attractive. I am excited that these young girls, whenever they feel down or feel low and they feel defeated and told that because they're a woman they can't be in a certain profession, or if people in their family, or their friends look at being in STEM as not being cool they can always turn to Hidden Figures, and they can reenergize and activate and know that their dreams are valid."


On the message brought by Jackson's character :

"She said what so many black women and minorities have been thinking. For us, we have been taught that we have to work twice as hard. We have to look twice as good. It's about equal footing. It's about being able to make mistakes and not be punished and to have the same level of empathy that we have for white women living in this country when they make mistakes. There have been situations in my life and so many people's lives who will probably read this where they can just recall and remember what it's like to always have to work five times as hard and then when you do work hard, sometimes we're undercut and we're dismissed. Whether people are doing it intentionally or not, it hurts. Mary Jackson, what she was experiencing was the excitement of finally being able to achieve a dream or live up to her true potential. Then you have this woman, this white woman to be specific telling her, 'No, you have to work twice as hard. You cannot attend the courses that the regular white men and women attend because of the color of your skin.' A predominantly all-white school and you're not going to be accepted there. And she gets very defeated at that moment and frustrated and she just says it like it is. The truth. Every time we try to get ahead or every time we try to have equal rights, you guys move the finish line and don't allow us that room to succeed."

"What we have to do right now is galvanize. We can't get numb. We can't be fearful. We have to choose freedom over fear. This movie will give off the energy that we need and we'll realize we need each other more than ever," she said. "We have to have the commonality of wanting to live in this world, together, through harmony, as one. If we can have that goal, if we can fix our minds and hearts on that then I think we will be fine."
Hidden Figures hits theaters on Christmas Day.


Watch the latest clips, behind the scenes footage and interviews from the film.


Loving Blavity's articles? Sign up for our daily newsletter.