These scores keep in mind the multifaceted nature of environmental racism.

Climate change and environmental justice are some of the most popular terms in contemporary news media. These terms have also started to seep into campaign talking points in the 2020 Democratic presidential field.

To remedy this, the Blavity Politics team has created a Racial Justice Environmental Scorecard for the 2020 Democratic presidential field. This scorecard compiles recommendations and findings from environmental and health organizations — like the United Nations and CDC — in conjunction with Green New Deal proposals, to assess how well these candidates address issues of environmental racism.

With environmental racism being a multifaceted problem, candidates are graded on the extent to which their plans remedy the economic, health, and pollution components of environmental injustice. While reviewing this scorecard, we encourage you to also review these environmental plans in their entirety. 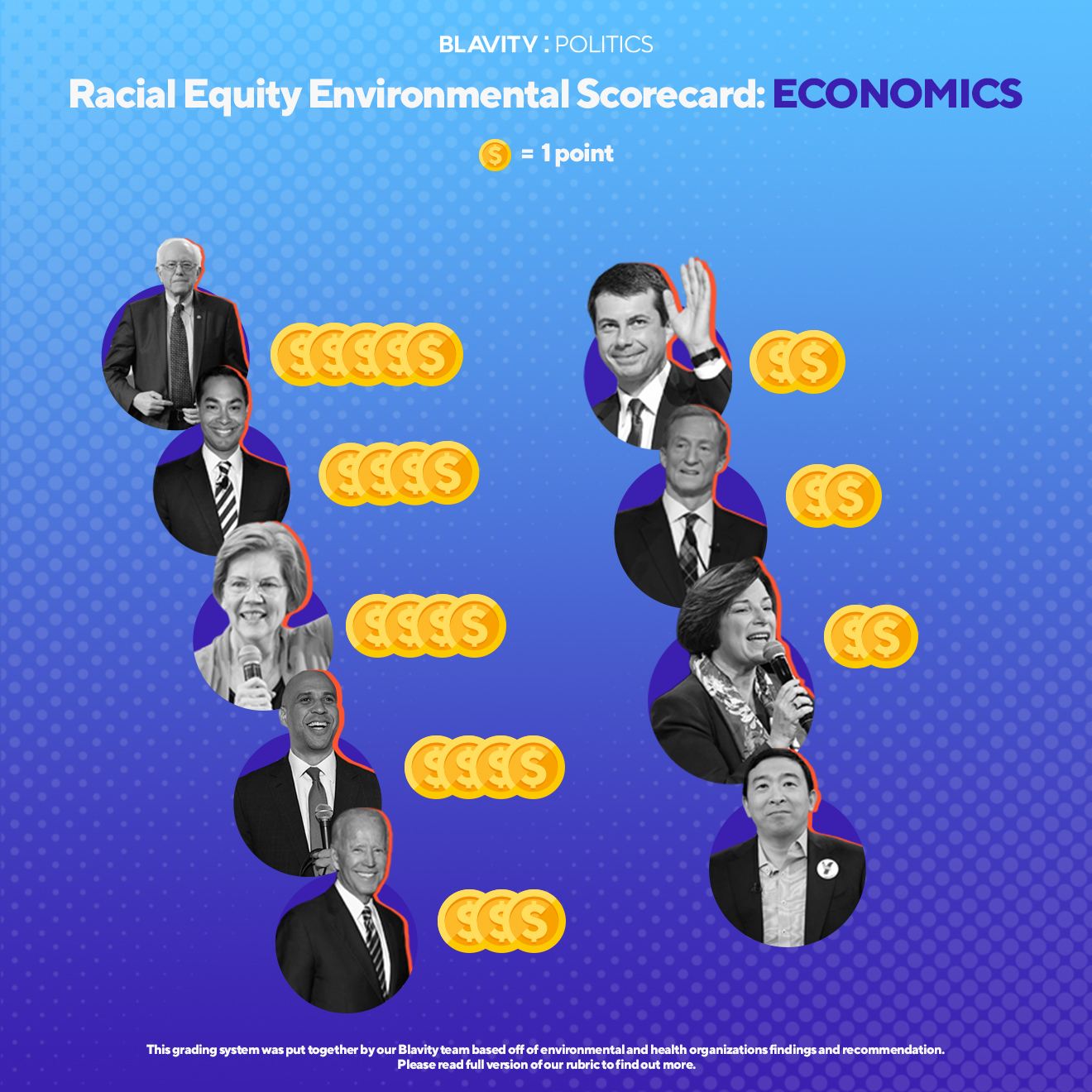 Senators Cory Booker  and Bernie Sanders both originally scored a perfect five points. Sanders' plan identifies and rectifies the economic needs of communities of color by providing a green job transitions plan, climate resiliency infrastructure funding, and environmental reparations (in the form of the Climate Justice Resilience Fund) for people of color.

Booker’s plan uses the Civilian Conservation Corps (CCC) to integrate communities of color into a green economy by supplying job training in career fields like forestry, and it establishes the Environmental Justice Fund (EJF) as a vehicle for environmental reparations by, in part, investing in black institutions (like HBCUs) from revenue collected from taxing polluters. Booker received a point deduction because his plan highlights housing infrastructure upgrades without any considerations made to prevent displacement.

Former Housing Secretary Julian Castro and Senator Elizabeth Warren both lost one point. Castro’s plan mentioned creating a green economy with “strong nondiscrimination protections,” but it did not specify exactly how it would transition communities of color into a transformed job market. Warren’s green jobs transition plan focuses on Americans generally, and makes no proposals to transition people of color, specifically, into a green economy.

Former Vice President Joe Biden’s plan lost two points because it failed to mention any specifics on how it would contribute to environmental resilience in communities of color, and it did not propose any form of environmental reparations for frontline communities.

Mayor Pete Buttigieg and Senator Amy Klobuchar both originally scored three points. Buttigieg’s plan mentioned the economic woes of communities of color as it relates to the environment, but did so with little detail. He did, however, earn a point for indicating that he would prevent FEMA-designated funding from diverted — a necessary resilience measure for frontline communities.

Klobuchar’s plan highlights the economic struggles communities of color face, strengthens the Low Income Home Energy Assistance Program (LIHEAP) to keep energy costs down in low-income communities, and increases federal funding for climate-related infrastructure upgrades. They both, however, received point deductions because their plans highlight housing infrastructure upgrades without any considerations made to prevent displacement.

Entrepreneur Tom Steyer’s plan earned two points for indicating that there was an economic linkage between poverty and environmental crises for frontline communities, and for promoting resilience efforts that might prevent displacement in communities of color.

Entrepreneur Andrew Yang scored zero points because none of the economic considerations of his environmental plan focused on (or even mentioned) communities of color. 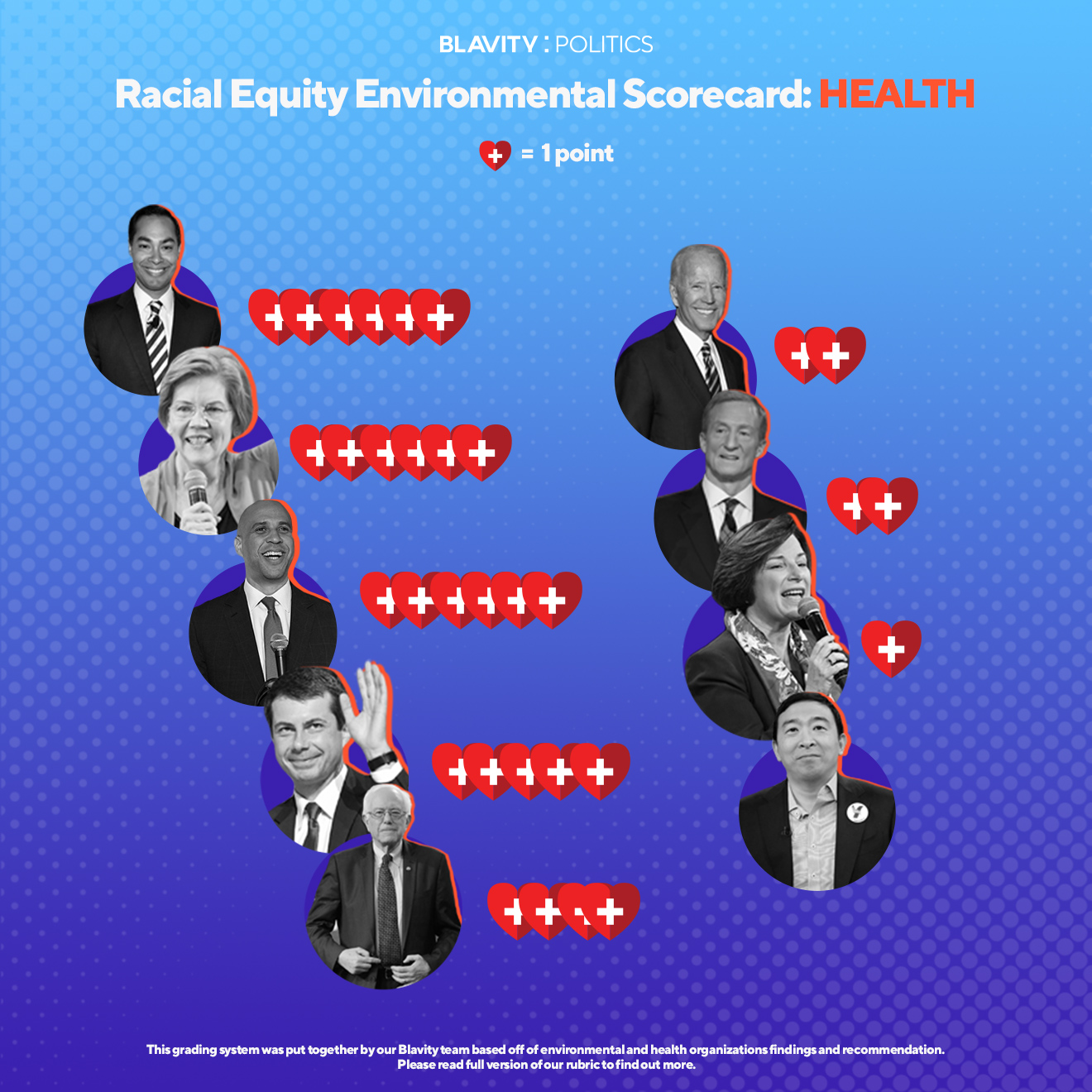 Castro and Warren both scored six points. Castro’s plan indicates that he would work with Congress to pass legislation aimed at eliminating lead as a public health risk – particularly in communities of color – by lead paints, soils, and pipes, while also directing $1 billion in funding to Centers for Disease Control for the Childhood Lead Poisoning Prevention Program.

Warren’s plan concentrates on how her Medicare for All plan could be used to transform American healthcare in a way that maintains health benefits for people of color with environmentally caused health conditions. Their plans both gained an extra point by indicating that they would work with Congress to pass legislation allowing those impacted by environmental discrimination to sue for damages and hold corporate polluters accountable at a federal level – in part by overturning Alexander V. Sandoval.

Sanders lost two points: One because his plan’s public health considerations focused on water availability crisis nationally without creating a similar public health plan specifically for communities of color, and the other because none of its public health recommendations would be codified into law. He did, however, receive a bonus point for indicating that he would attempt to have the Alexander V. Sandoval ruling overturned.

Klobuchar scored only one point because her plan neglects to specifically indicate the health effects of environmental injustice. Her plan earned the single point by reinforcing SNAP which would provide important nutrition assistance in communities of color dealing with environmental racism.

Yang scored zero points because none of the health considerations of his environmental plan focused on (or even mentioned) communities of color. 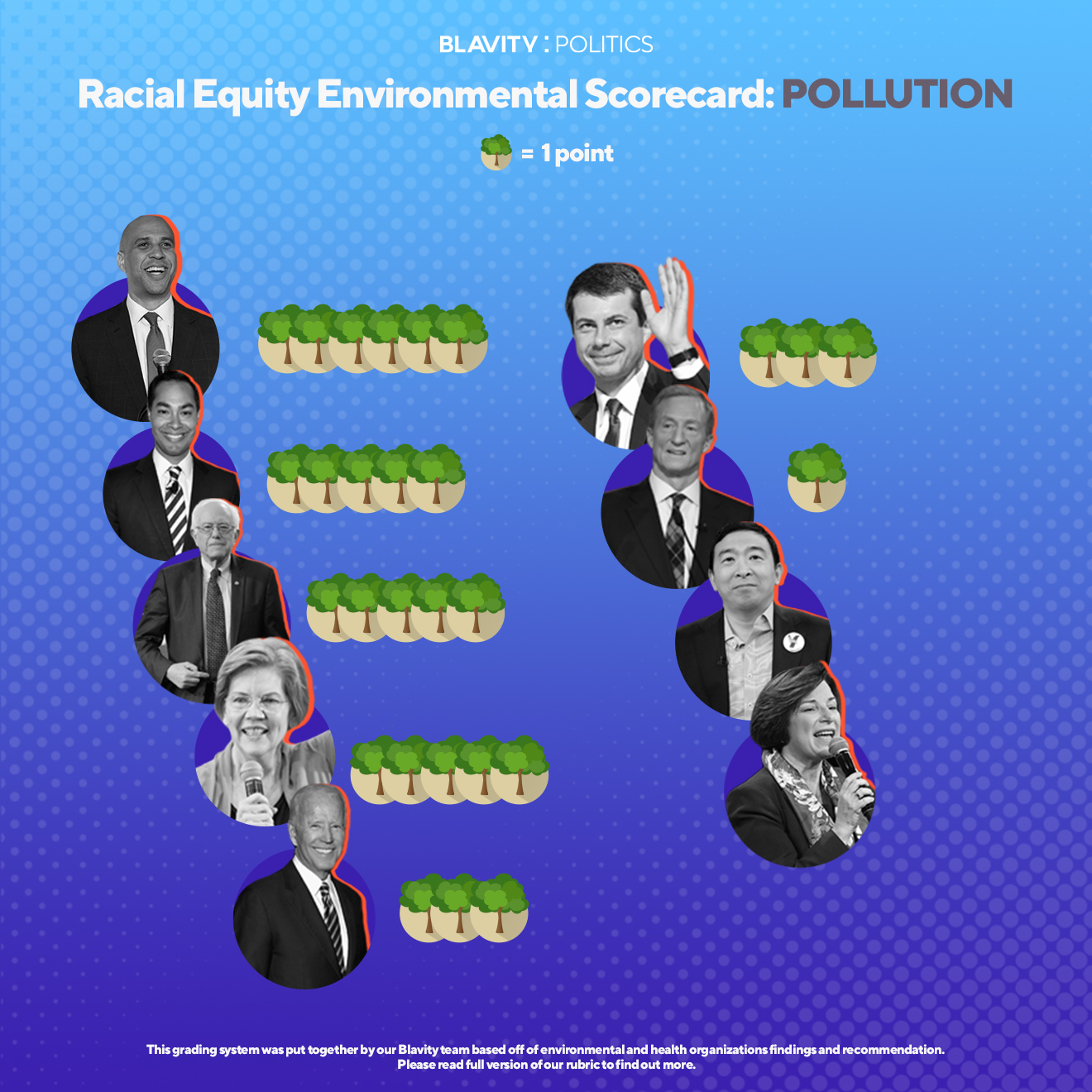 Sanders' plan strengthens civil rights protections of marginalized communities against polluters, strengthens the EPA’s Office of Civil Rights, and allocates funding to clean up superfund and brownfield sites in communities of color. Warren’s plan empowers the EPA to target polluters that cause harm in communities of color. Additionally, her plan proposes the Corporate Executive Accountability Act which levy criminal penalties on executives whose companies harm people through criminally negligent environmental behavior.

Biden and Buttigieg both lost two points. Biden’s plan did not indicate that it would improve environmental research funding for communities of color and did not mention a superfund clean up plan unique to frontline communities. Buttigieg’s plan mentions that it would make the EPA “consider environmental justice in all its regulatory decisions” without indicating how, and it also omits any reference to Superfund contamination containment in communities of color.

Steyer’s plan earned a single point because it only mentioned that toxic contamination exists at higher rates in marginalized communities.

Klobuchar and Yang both earned zero points. Klobuchar’s plan is focused entirely on climate change, as a developing issue in its relation to frontline communities, but not at all with regard to other pollution and contamination issues. Yang’s plan makes no pollution control considerations focused on communities of color. 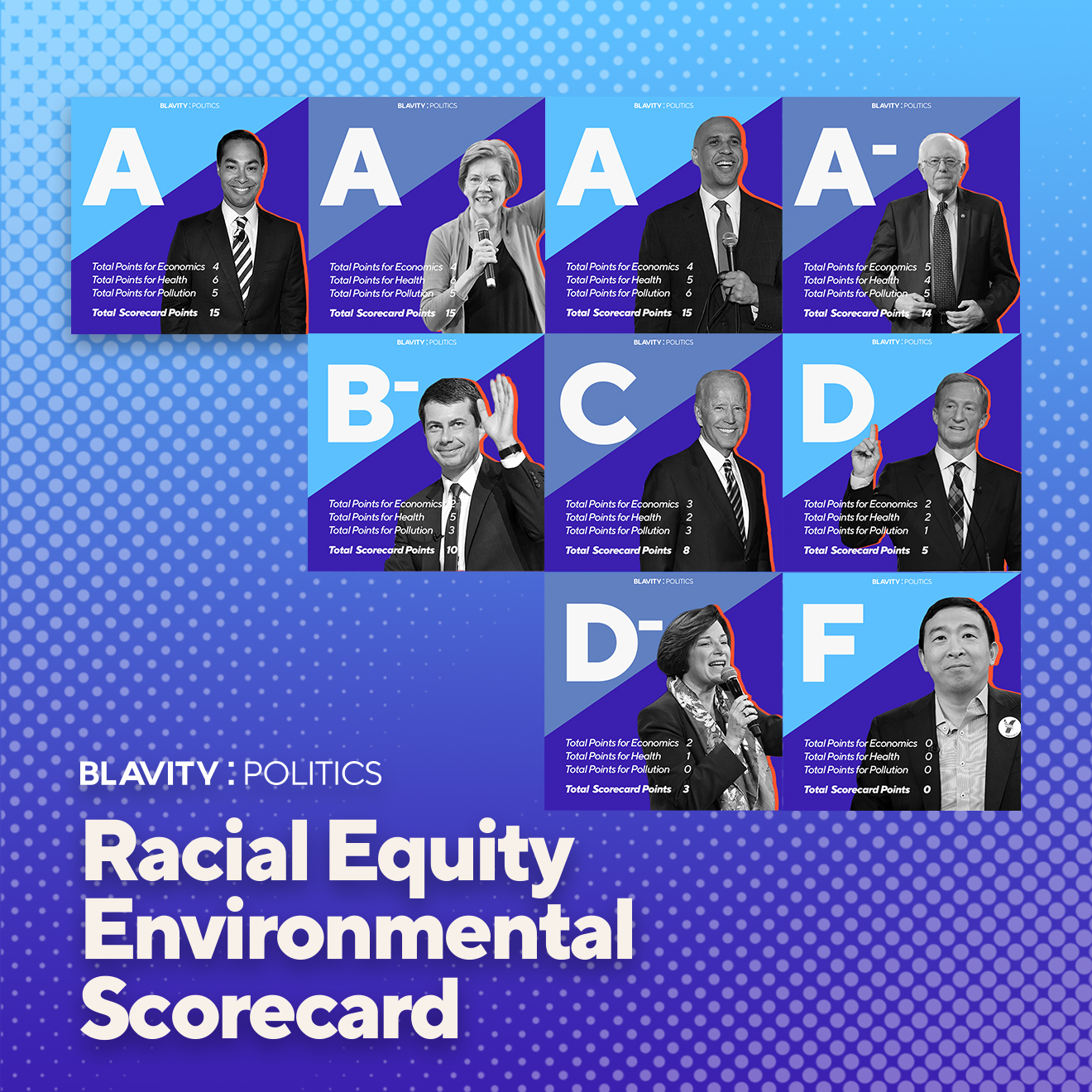 The aforementioned takeaways from our analyses frequently feature a recurring list of the same candidates. This indicates a huge gulf in how dedicated each candidate is to rectifying environmental racism.

Disinterest in or very superficial engagement with issues of environmental justice can be disheartening, as black Americans continue to be faced with not only a global climate crisis, but also with domestic environmental apathy.

In reality, this information provides an opportunity for you to knowingly pressure these candidates into crafting policies that benefit the health and wellbeing of all Americans.

*Updated: Secretary Castro has ended his presidential campaign since the original publishing of this piece.