The 2010s have seen social media giants, like Twitter, totally reshape the global cultural landscape. These cultural changes have had palpable effects on global politics. In particular, the social and political influence of Twitter, as illuminated by Donald Trump, has been studied to hypothesize how people think and what they value in a digital age. Much of this research focuses on individual users, but tweets from official (in this case, environmental) organizations can highlight which efforts these particular organizations support. This kind of public virtue-signaling is becoming increasingly important as organizations broaden their outreach to more diverse audiences.

Modern environmental law in the United States is just over a century old. A legal field once dominated by state and local lawsuits currently features sizable environmental nonprofits specializing in federal litigation. Four of the largest (and most active) litigation-driven environmental nonprofits are Earthjustice, Environmental Defense Fund (EDF), Natural Resources Defense Council (NRDC), and Sierra Club. Not only have these organizations individually and collaboratively filed some of the largest lawsuits of the past decade, they also all boast fairly active Twitter presences. Collectively, these four organizations have over 1 million Twitter followers, meaning that every tweet can possibly generate hundreds of thousands of views.

These four groups have repeatedly expressed public support for initiatives that combat environmental racism. How often do they use Twitter to spread awareness about this work?

A cumulative analysis of the last 16,384 tweets from these organizations shows that topics related to issues of environmental racism or environmental injustice are only present in 148 of their tweets (including both retweets and replies). Of the 148 tweets, 56 of them came from Sierra Club and 47 from the NRDC. 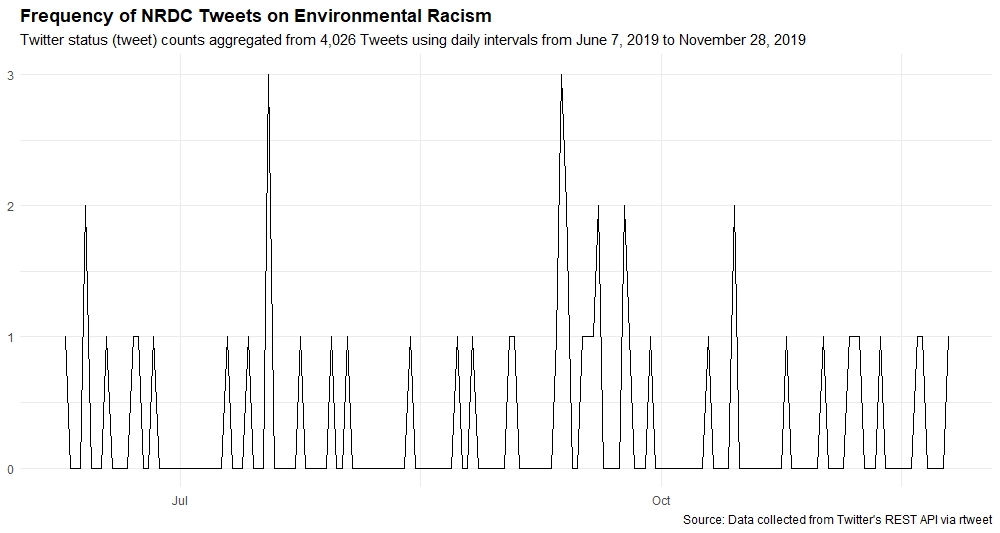 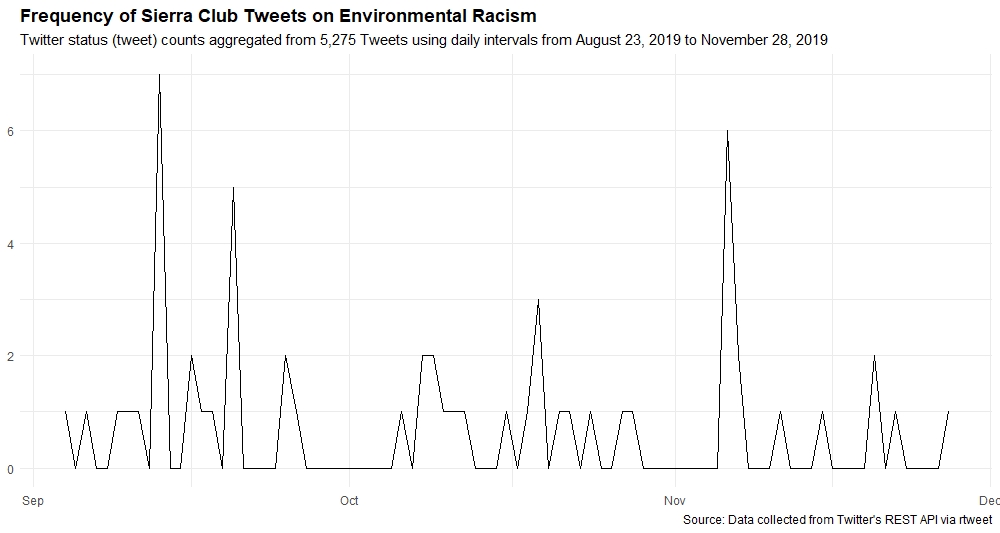 Considering how frequently domestic environmental issues affect communities of color, it’s strange how infrequently these institutions are tweeting about environmental racism. This is even more striking because these nonprofits are often the first groups to file lawsuits in cases related to environmental injustice. The NRDC’s Interim President Mitchell Bernard even published a blog post explaining how important it is that environmentalists fight racism.

Why should environmentalists speak out against Trump’s attack on the congressional women of color? Because racism and xenophobia do violence to American values—and to values essential to environmentalism. Read more on that connection in my new blog: https://t.co/1Vtg6xdkLp— MitchNRDC (@MitchNRDC) August 2, 2019

Without looking at these organizations’ internal social media policies, it's difficult to diagnose why only around 1% of their tweets are about environmental racism. Looking at the tweet trends, however, it is possible to determine when (and why) these groups are discussing environmental injustice. 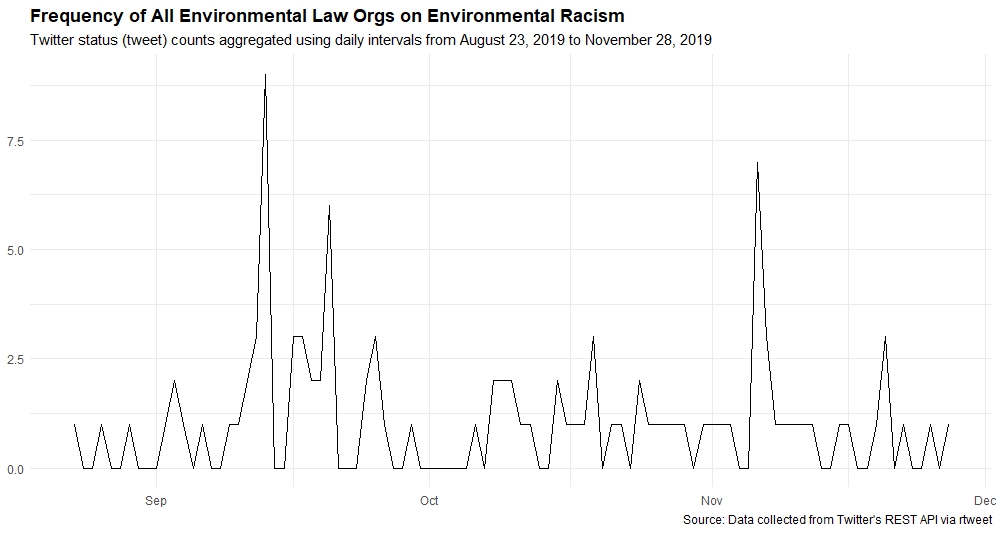 Examining this three-month period illustrates that there have been days when Twitter accounts have repeatedly tweeted about issues affecting frontline communities. September 13 and 20 and November 6 had the most Twitter mentions of environmental racism. On these days, over 80% of the tweets from these organizations came from Sierra Club. On September 13, Sierra Club was covering the Democratic Debate.

The candidates wanted to talk #climate & environmental justice, but the moderators didn't. Here's what we know post-#DemDebate:

Every candidate has committed to significant action to tackle the climate crisis while Trump is burying his head in the sand while the seas rise.— Sierra Club (@SierraClub) September 13, 2019

On September 20, its coverage was focused on the Youth Climate Strikes.

TODAY'S THE DAY! Join young people and adults around the world in striking for #environmental justice, Indigenous land, a #GreenNewDeal, protection of biodiversity, sustainable agriculture and more. Join us on this historic day --> https://t.co/JbijdpFZ3M #StrikeWithUs pic.twitter.com/VNWQf7leQ7— Sierra Club (@SierraClub) September 20, 2019

Finally, on November 6, Sierra Club was bringing attention to the first anniversary of the Portland Clean Energy Fund.

It’s been one year since the Portland Clean Energy Fund made history as the first initiative created and led by communities of color to fund climate justice and jobs in the United States.

Featuring the Portland Clean Energy Fund (an initiative focused on making sustainable lifestyles accessible to low-income people of color) is an important example of how Twitter can be used to highlight lesser-known environmental enterprises. Increasing awareness of these projects can encourage the broader marginalized community to advocate for and implement structures that produce healthier communities.

Many chains do not charge extra for vegan milk. The surcharge is unfair to customers who oppose animal abuse and it punishes people who are lactose intolerant (most of whom are people of color) as well as anyone who chooses vegan milk in order to reduce methane-gas emissions.— PETA (@peta) November 16, 2019

What is interesting about this tweet is the important issue that lies at the intersection of animal cruelty, environmental racism and food insecurity. As PETA and the Nature Conservancy have over 2 million combined followers, more tweets like this one could make animal cruelty advocacy more racially inclusive. This inclusivity could increase the number of people invested in protecting wildlife.

Who checks the government when it refuses to check itself?

If you assumed that the U.S. Environmental Protection Agency (EPA) was not the most prolific tweeter, you would be right. From February 9, 2016, through November 28, 2019, the EPA has tweeted 3,342 times. Over this duration, there have been 19 mentions of environmental injustice by the EPA’s official Twitter account. The most fascinating insight, however, comes from examining the relative frequency in mentions under the Obama and Trump administrations, respectively. 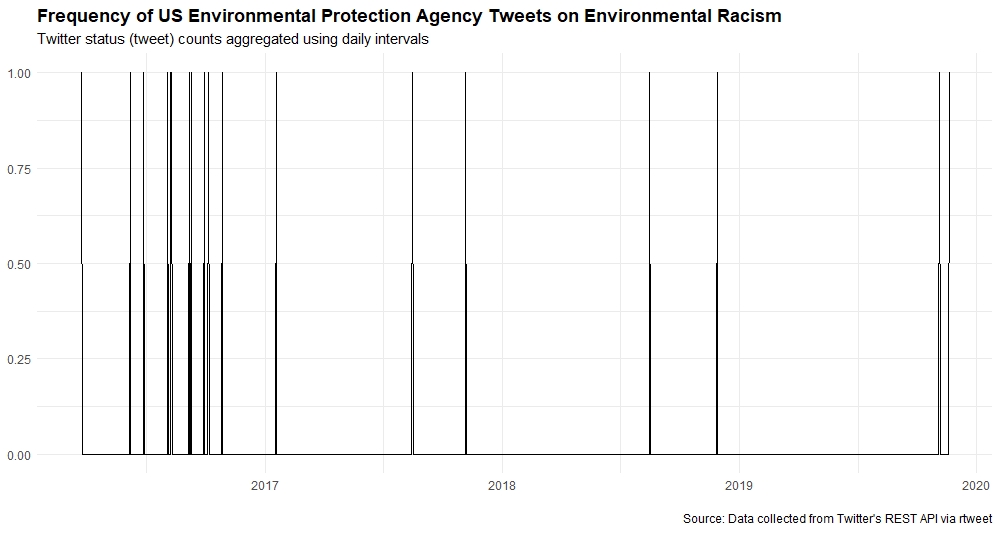 During the 11-month analysis window of Obama’s EPA, there were 13 mentions of environmental injustice. In comparison, Trump’s EPA mentioned environmental racism or injustice six times over a nearly three-year span. Beyond the frequency of mentions, there is also a topical shift in the tweets coming out of the EPA under both administrations.

Obama’s EPA tweeted more frequently to honor the work of Americans of color, as they enhanced environmental justice.

Trump’s EPA has focused more on trying to demonstrate that EPA administrators acknowledge the concerns of environmentalists of color.

While only 38 of the 3,278 tweets analyzed from Green America address environmental racism, the tweets that do often provide a check on the Trump administration’s environmental deregulation. For example, a late 2018 tweet from the EPA announced that it was providing environmental justice grants for frontline communities.

We just announced the availability of $1.5 million to help up to 50 community-based organizations in their efforts to address local environmental justice issues. https://t.co/vGP2u86d22— U.S. EPA (@EPA) November 28, 2018

Actually, as Green America notes in a tweet almost two years prior, this environmental justice grant program was just the reinstatement of a better funded Obama-era program that was suspended shortly after Trump took office.

This type of accountability is invaluable in informing people about legislation and policy changes that could be transformative in their communities.

The frequency with which an organization tweets about environmental discrimination is no indication of how comprehensive its work to combat issues might be. Nevertheless, Twitter and social media in general are powerful tools for spreading useful information that may generate the necessary support for positive work already being done. In a “fake news” era, it is even more imperative to promote overlooked issues and their corresponding solutions. It can be argued that Twitter has been co-opted as a tool to propagate misinformation, but that’s only true if problem-solvers refuse to use it as a resource to educate and engage.