‘I Want Jeff Bezos To Know’: Sister Of Late Amazon Worker Who Gave COVID-19 Tests To Employees Is Devastated And Outraged

"She signed up to work at Amazon to be a sorter, not a COVID tester," Poushawn Brown's sister, Christina, told Blavity.

Outrage has continued to grow over the death of Poushawn Brown, a 38-year-old Amazon delivery driver who last year was moved into a COVID-19 testing unit at one of the company’s warehouses in Virginia despite having no medical background or experience.

Christina Brown, Poushawn’s older sister, gave a tearful interview to Blavity about the devastation her family is facing and the offensive response she says they received from Amazon after Poushawn's death.

Christina, who also worked at Amazon for a short period, said she could not afford to have an autopsy performed on Poushawn after she died unexpectedly in the middle of January. A week before her death, Poushawn told her she wasn’t feeling well and had a headache before she died suddenly one morning in her sleep.

Because Poushawn worked at Amazon as a COVID-19 tester for their DDC3 warehouse in Springfield, Virginia, Christina asked the company whether they would be willing to cover the cost of the autopsy to figure out what happened to her.

She got no response from the company for weeks and was eventually forced to bury Poushawn without an autopsy. On Jan. 28, Amazon finally responded to Christina, only offering her and Poushawn’s 12-year-old daughter two months of counseling that would expire on April 1.

“My sister was not a doctor, she was not a nurse. She wasn't an LPN, an RN, a CNA or a health aide. She had no business administrating COVID tests to anyone. She signed up to work at Amazon to be a sorter, not a COVID tester. She didn’t even have the proper PPE,” Christina said.

“This is a trillion-dollar company. At the end of the day, if you take the money out of it, any company that you work for would at least send a card or flowers, or at least ask what happened and how it happened,” she added.

Amazon did not respond to Blavity’s multiple requests for comment.

Sisters Get Hired As Drivers

Christina explained that the two were born in Baltimore, Maryland, but grew up in northern Virginia. Christina was always protective of her little sister and managed to get her a job at Amazon after she began working part-time as a delivery driver for Amazon Prime in 2018.

Both worked as drivers for the company for about a year until an accident prompted them to move into an Amazon warehouse where they sorted thousands of packages a day. Christina said she left the job early last year, but Poushawn stayed and kept working in the warehouse until August 2020, when they moved her to a new COVID-19 testing department.

Throughout the first few months of the coronavirus pandemic, Amazon faced considerable backlash for allowing the virus to run rampant through their workforce, with more than 20,000 employees contracting COVID-19 from March to October, according to the BBC.

Poushawn Brown tested other Amazon workers for 9 hrs/day – without adequate PPE and only one #COVID19 test for herself.

One day, she complained of a headache. She died the next morning.

This is just one example of Amazon failing to protect its workers. https://t.co/15v943NWuf

Christina told Blavity she spent hours on the phone with Poushawn, who expressed grave concerns about the dangers of the position. The 38-year-old mother had reservations about conducting COVID-19 testing considering her lack of medical experience and the meager PPE she was provided.

On top of her fears about performing the job, Poushawn was especially concerned because so many people had tested positive in the warehouse yet Amazon refused to shut the facility down for even one day to perform a deep cleaning, according to Christina.

She added that Poushawn said it was well known that people were coming to the warehouse for work even after knowing they had COVID-19.

“Employees and managers are scared for their lives and do not want to come to work until the site is cleaned,” Poushawn wrote to Christina in one email obtained by Blavity.

The two eventually spoke about her leaving the position, and over Christmas, Christina said Poushawn agreed to leave the job and start working toward her dream of opening a bakery. 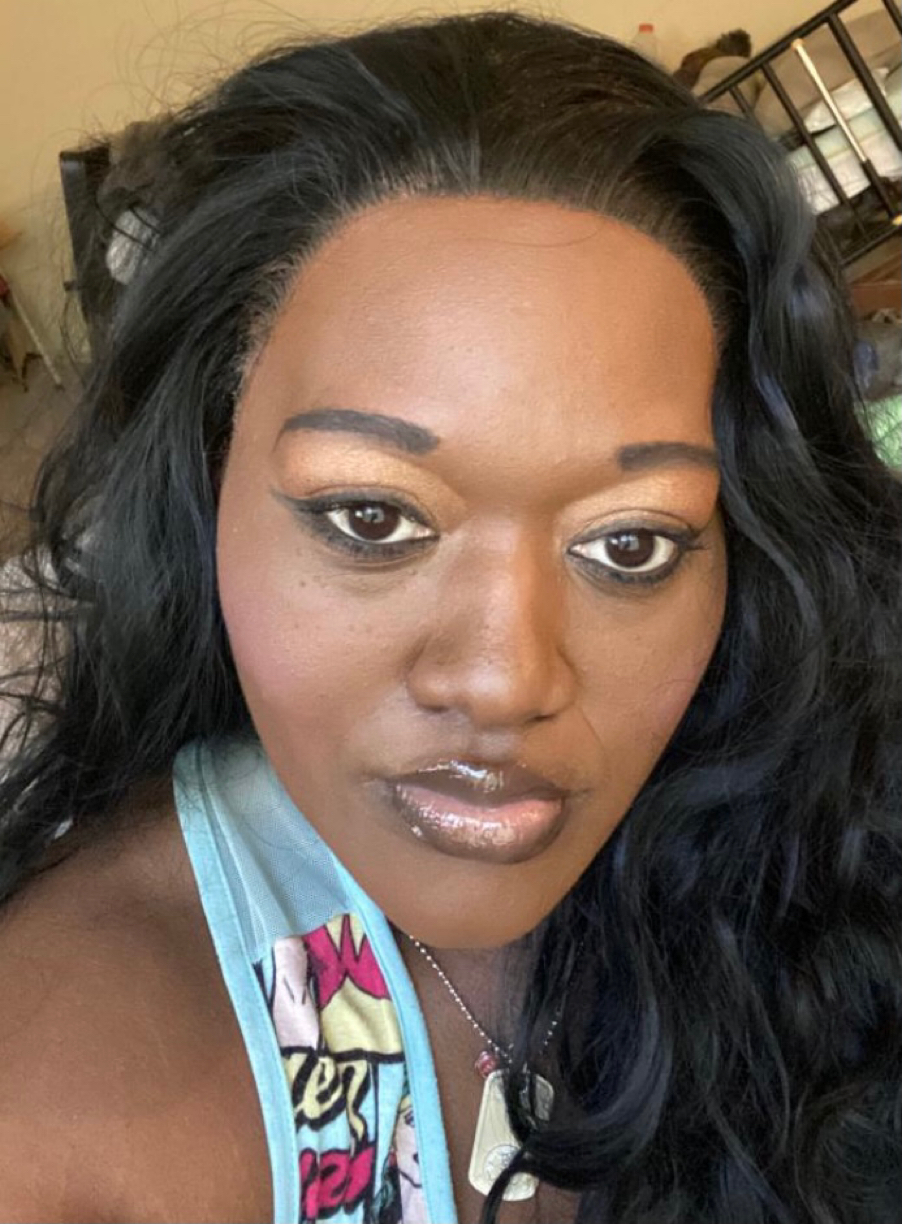 “Even when my sister passed, I contacted them and told them that I don’t have enough money for an autopsy or funeral. I asked if there was a way that I could take out a loan or if they could do something. They said they would get back and they never got back,” Christina said, noting that autopsies are only done for free in the event of a suicide or homicide.

“I would like Jeff Bezos to know that my sister worked for his company literally until the day that she died and she loved working at Amazon in the beginning," she went on. "It wasn't until the COVID testing when everything happened and when employees were getting treated badly, where she was writing anonymous notes, anonymous emails, anonymous text messages that she was scared."

Experts Weigh In On Who Should Perform COVID-19 Testing

Medical experts who spoke to Blavity were split on the idea of people without medical backgrounds conducting COVID-19 testing.

Desikan and others said that while it was not common, it was possible for people without medical backgrounds to learn how to take nasal swabs and conduct the tests.

Casey Kalman, a research associate at the Democracy Union of Concerned Scientists, echoed those remarks, saying that while it is extremely rare, there have been cases where volunteers performed COVID-testing.

But Desikan said having the proper PPE was imperative for people conducting COVID-19 testing, especially for those who may not have experience doing it.

“We want people to have tests available to them. This is a deadly pandemic that is hurting a lot of people across the world, so to have proper tests that are able to accurately show whether people have this disease or not and therefore make evidence-based decisions to stop the spread of this and to save themselves and their loved ones from further harm, it's really important,” Desikan told Blavity.

“We would want that to be done by health professionals,” she added.

Dr. Eva Bonsu said she has not seen any cases where people without a medical background are conducting COVID-19 testing. She works at a hospital so most of the testing is done by medical assistants and nurses. But her husband runs three urgent care centers and said untrained people can learn how to perform COVID-19 tests.

All of the people conducting the tests at his centers are medical assistants, but he said it was not hard to teach others how to take a nasal swab. Bonsu said it is not common for people without a medical background to run COVID-19 testing.

A 12-Year-Old Without A Mother

Christina said she is now left to care for Poushawn’s young daughter Gabby and their elderly mother, who has been bed-ridden since 2017. The only time her mother has left the house since the pandemic started is to go to Poushawn’s funeral, Christina said.

“At the end of the day, my niece is 12 years old and she's left without a mother. My sister had no business COVID testing and being put in a position like that. Nothing is going to bring my sister back,” Christina told Blavity.

Because no autopsy was done, it is unknown whether Poushawn died of COVID-19. But Christina said the week before she died, Poushawn complained about not feeling well.

“The day before she died, she got off of work around 6:38 p.m. She called me as she got into the car. She said she was on her feet all day doing testing and she would give me a call when she got home. My sister went home, ate dinner and went to sleep,” Christina said.

“She woke up the next morning, got her daughter ready for school, took a nap and never woke back up,” she added.

Christina sent her son to go check on Poushawn after she did not answer her phone, and the young man found her unresponsive.

Christina leveled harsh criticism at Amazon for not hiring an outside company to conduct COVID-19 testing, noting the enormous profits the company has brought in since the pandemic started.

A Brookings Institute study showed in December that Amazon made nearly $6 billion in profit with Bezos himself seeing his personal wealth grow by $75.6 billion since last March.

“I don't want anyone to forget about my sister. I want Jeff Bezos to know that he had a worker who worked for him till the day she died. She was nervous, she didn't want to work in that department. She had complaints, she sent emails to me saying it's not safe, about the warehouse not being clean, about the amount of COVID cases they had, about people coming to work with COVID,” Christina told Blavity.

In addition to the pain of losing her sister, Christina said Amazon lied about their response to her death and gave them nothing aside from the offer of counseling.

“My sister is gone and I don't even think they care. The facility lied and said that they had reached out to us and were helping us. Nobody has helped us. Nobody gave us a call, nobody gave us a dime. My mother hasn't even gotten a card,” Christina said.

She added that the warehouse still has employees without medical experience conducting COVID testing. Despite complaints from Poushawn and others working at the warehouse, those in charge refused to clean the facility at all.

Christina said she has received messages from others working at the warehouse who said managers there do believe Poushawn died of COVID-19 yet simply moved to offer the position to another Black woman working there.

The facility did not respond to requests for comment.

“I want Jeff Bezos to know that she was a young Black woman that had so much life left. That had a daughter. That worked hard. That never said no. She came in early and stayed late. This is a life lost. What's more precious and powerful than a life? There is no amount of money that can bring her back, but what about her daughter?” Christina said.

“I miss my sister every day. She was not my child but it was like I had her. From the time we were small, I took care of her until the end. I got her dressed for her funeral. The treatment from the company hurts. I want Jeff Bezos to know the pain and the hurt. It's unbearable pain. I'll never have my sister,” she added.

A GoFundMe has been set up to support Poushawn’s daughter.