The Under Told Story Of 'The Big Six,' Organizers Of The Civil Rights Movement

Note: This article is part of Blavity's #MakingHistoryWhileBlack Black History Month series where we are highlighting unsung historical black figures whose personal stories are deserving of more prominence.

One of the greatest collaborations to ever exist didn't happen on a soundtrack. It didn't even take place on a sports team. It came together in 1963 at a swanky New York City hotel where six civil rights icons announced their plan to host the most notable protest in civil rights history.

John R. Lewis, Whitney Young, Asa Phillip Randolph, Martin Luther King Jr., James L. Farmer Jr. and Roy Wilkins make up the group know as The Big Six. Most Americans recognize Lewis, who currently represents Georgia's fifth congressional district, and Dr. King whose "I Have a Dream" speech became the most memorable moment at the 1963 protest. But, how many Americans can recall the other listed names? In fact, how many people realize that the 1963 March on Washington was much bigger than one man and one dream? 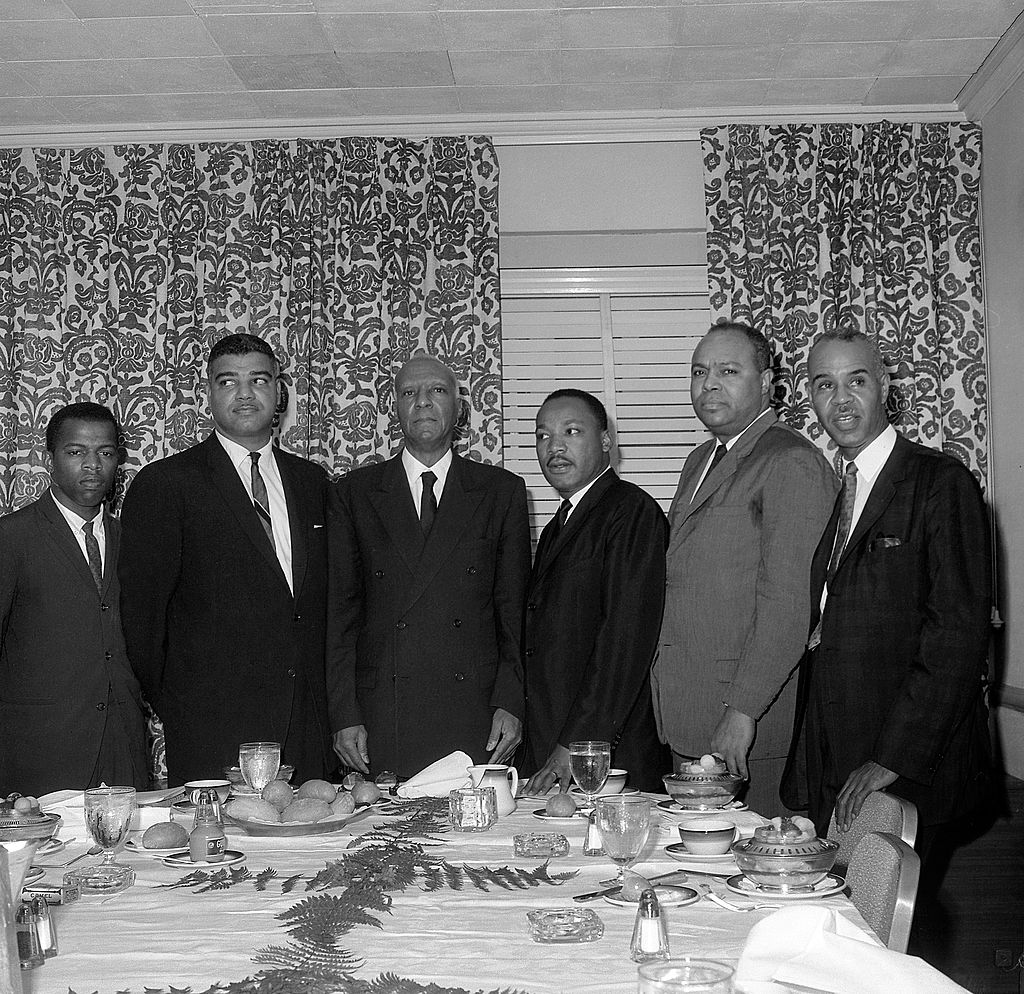 The fact that these gentlemen aren't as recognizable as the starting lineup on an NBA team says a lot about how their story has been told. Truth is, these six men helped change the civil and human rights game in the United States. Even more importantly, they did it together, despite their different ideologies.

Young led the National Urban League — one of the six Black organizations to sponsor the March on Washington. Today, when we hear about Black executives breaking through corporate glass ceilings, we should think about Young and how he oversaw integration in major U.S. companies. Remarkably, Young is known to have helped 40,000 Black U.S. citizens find jobs, in only one year. He even acted as an advisor to President Lyndon B. Johnson.

Despite his success, Young's philosophy on  Black economic and job advancement did not go without criticism. Many Black Power advocates disagreed with his strategic boardroom approach. His situation could be compared to the resounding backlash rapper and entrepreneur Jay-Z received after forming a business relationship with the NFL. However, it seems both men acted on one truth — when it comes to equality, money plays as big a role as marching. Simply put, there's no equal chance, without finance.

While Young gained the title "Powerbroker of the Civil Rights Movement," his colleague Randolph was known for unionizing Black workers. Randolph founded and led the first Black labor union, Brotherhood of Sleeping Car Porters, in 1925. By the time 1963 came around, he was president of the Negro American Labor Council (NALC)— a group he helped create. As a prevalent Black labor organizer, it made sense for Randolph to direct the march. After all, the protest was titled March on Washington for Jobs and Freedom. At the time, Randolph had already spent decades advocating for both.

Randolph's successful organizing skills led to many national policies that benefited the working class — especially federal employees. First, he influenced President Roosevelt to prohibit discrimination in defense and government industries. Next, he helped desegregate the military with an executive order from President Harry Truman. Clearly, Randolph was a veteran in regards to Black worker's rights, but his fight extended beyond the Black working class. When he read the demands for the 1963 march, decent jobs and fair wages for all Americans was at the center of the list.

Interestingly, Randolph was 74 years old when he organized the March on Washington, reflecting a vast age range among the planners. Forty-three-year-old James L. Farmer Jr. might not have been as old as Randolph, but he had his own history making moment that preceded the 1963 march. Remember the Denzel Washington movie The Great Debaters?  That film spotlights Farmer and his historical college debate teammates. Of course, we know he went on to become more than a great debater.

Farmer cofounded and led the Congress of Racial Equality (C.O.R.E.). His multi-racial organization emphasized nonviolence while performing integrated sit-ins and freedom rides from Chicago to the Southern states. Though Farmer was a 1963 protest organizer, he was arrested at a separate protest in Louisiana prior to the March on Washington and remained in custody while the event took place.

When we think about what Farmer and the other civil rights leaders accomplished individually, it's easy to forget the violent opposition they faced. They received constant harassment and threats as they fought to be treated with common decency. Not to mention the jail cell became a second home for many of them.To put their environment in context, consider  Medgar Evers from the National Association for the Advancement of Colored People (NAACP). He was assassinated about two and a half months before the 1963 March on Washington — right in front of his home. But that tragic loss did not deter NAACP Executive Secretary Roy Wilkins from showing up and showing out. Wilkins acted as a March on Washington organizer and became NAACP president, the next year.

A post shared by BlackThenBlackNow (@blackthenblacknow) on Jan 8, 2020 at 3:35pm PST

1963 seems like such a long time ago, but the problems the Big Six fought against are still present. Some would argue those issues have gotten worse. Fair wages remains a struggle, police brutality is more visible, the prison industry is growing and the U.S. is still fighting to be "great again" at the expense of the less privileged. Still, these atrocities don't take away from what the 1963 protest accomplished. It created a clearer path to the 1964 Civil Rights Act and future equality bills. More notably, the March on Washington and The Big Six gave conscious minded individuals a blueprint on how to chip away at the oppressive system that built America. It takes unity and persistence.

Nonetheless, there's still much work to do and in the words of Rep. Lewis, who represented the Student Nonviolent Coordinating Committee at age 23, "We must say 'wake up America, wake up' for we cannot stop. And we will not and cannot be patient."