Divers With a purpose / Photo Credit: Photo courtesy of Kenneth Clark/Animations by Blavity

Inside the mission and impact of Diving with a Purpose.

Update (June 30, 2020):  An earlier version of this article failed to give proper credit to the Slave Wrecks Project (SWP) for the discovery of the São José Paquete de Africa. SWP is an international partnership between the Smithsonian’s National Museum of African American History and Culture, Iziko Museums of South Africa, the U.S. National Park Service, the South African Heritage Resource Agency, Diving With a Purpose and the African Center for Heritage Activities. This information has been updated in the original story.

Original (December 4, 2019): About 250 to 600 bodies were shackled together, often head to toe, in the cargo hold of a ship. Of the estimated 12.5 million Africans who were forcibly ripped from their families and sold like cattle around the world, about 10.6 survived the middle passage. Thousands of souls died along the way from sickness, cruelty or via a lesser-discussed demise, due to shipwrecks. Faulty record-keeping has prevented archaeologists from knowing the exact number of slave ships that faced wreckage along the way, but 400 years after the beginning of slavery in the United States, this group of Black maritime archaeologists and divers are searching ships and stories often left out of history.

Diving With a Purpose was co-founded by Kenneth Stewart, a regional representative of the National Association of Black Scuba Divers (NABS), and Biscayne National Park archaeologist Brenda Lanzendorf. When Stewart was featured in a documentary about the search for the Guerrero, a lost slave ship that is said to have crashed near the Florida Keys, Stewart was asked if he could connect the documentarians with Black divers who would be interested in being interviewed about the subject. Lazendorf eventually told Stewart she was the long diver at the park and needed help documenting ships. After considering this, Stewart went home and sent his NABS family that opened with, “Tired of the same old dives? Let’s dive with a purpose!”

Although Lazendorf has since passed away, Diving With a Purpose’s mission continues to thrive; the program now boasts 500 divers, 18 shipwrecks documented and 18,000 volunteer hours clocked. Divers registered with Diving With a Purpose undergo a weeklong training before their discoveries can begin. During training, they learn trilateration mapping, which is a method for underwater cartography. Once a diver comes upon an artifact underwater, they create an equilateral triangle by finding three artifact reference points and measuring the distance between them.

“The first day of training is all classroom,” Stewart told Blavity. “A mock wreck is placed outside, and they practice what they have learned from [Diving With a Purpose’s] manual […] The other piece is in situ [which means "in position"] drawing. The advocate draws artifacts they measured using regular pencils and waterproof paper.” 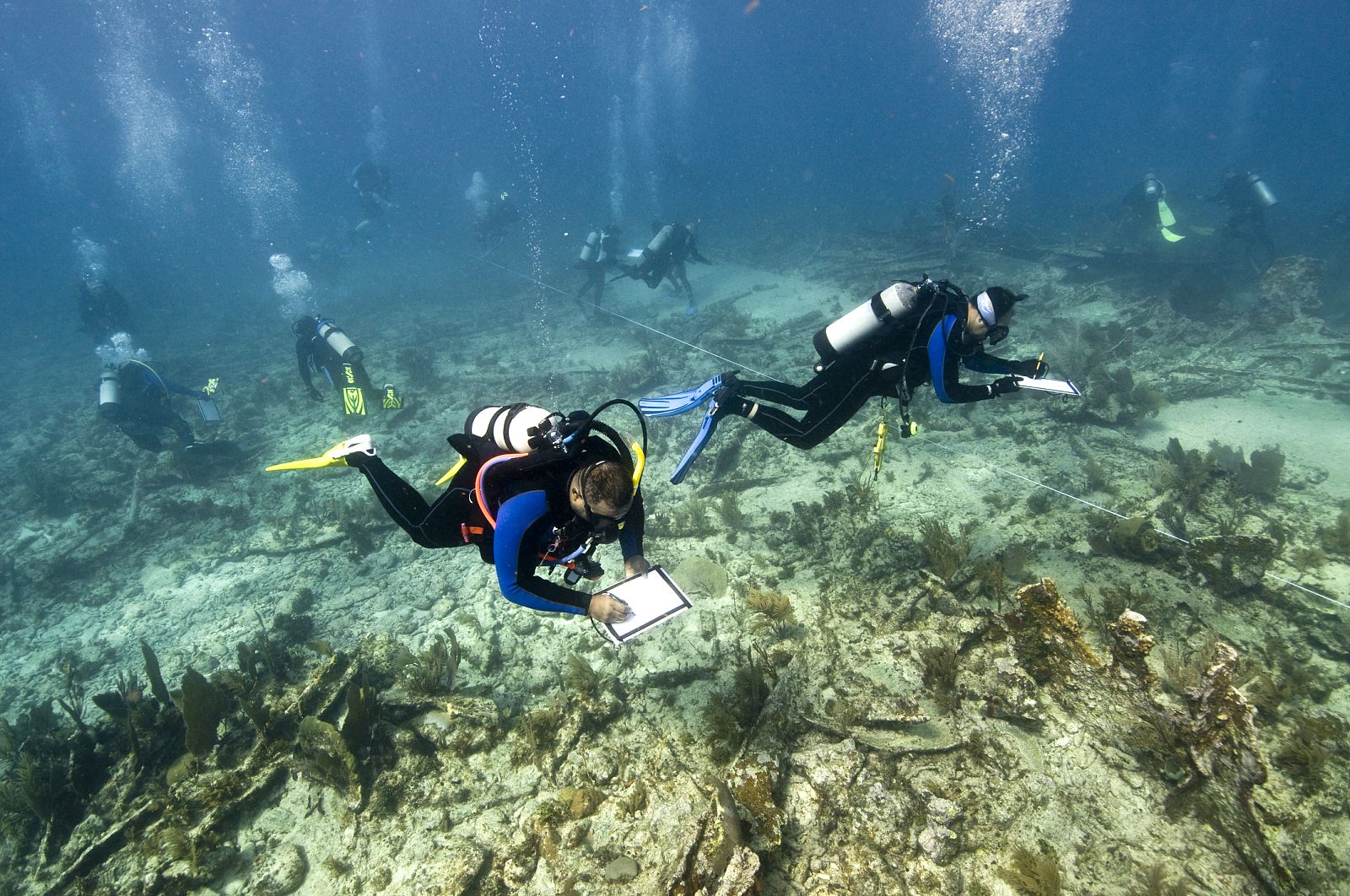 “There is something expansive about this work,” Dr. Flewellen said when considering her reason for becoming a diver. “To be a person of African descendants working on the materiality of the Transatlantic Slave Trade – be it on land or at sea – is a healing process. It allows me to connect with my ancestors and bring their lives to the surface to be reckoned with, praised and honored.”

One instance of healing stands out amongst the rest. After assisting with a wreck site off the coast of South Africa, Diving With a Purpose helped discover and verify a slave ship, whose boards once carried ancestors of Mozambique. Remains from the São José Paquete de Africa were recovered thanks to The Slave Wrecks Project (SWP), an international partnership led by the Smithsonian's National Museum of African American History and Culture (NMAAHC). Diving With a Purpose had the honor of partnering with the NMAAHC, Iziko Museums of South Africa, the U.S. National Park Service, the South African Heritage Resource Agency and the African Center for Heritage Activities to bring this shipwreck back to public consciousness.

The team shared their findings with the ship’s descendants, the Makua tribe. One elder from the tribe handed the group a carefully crafted basket filled with soil from the place where many enslaved Africans last stepped on their continent before being taken from their homes. The elder wanted one thing­: For the divers to pour the soil as close to the site of the slave shipwreck as they could, thereby acknowledging those who were lost and finally allowing their souls to rest with a piece of home. These invaluable moments helped shape the young divers, who through their work are better understanding the full weight of what Black people around the globe have endured.

Diving With a Purpose trains both adults and young adults ranging from 16 to 23 years of age, who hail from all around the world, including Costa Rica, Mozambique, Peru and more. Stewart shared that it was crucial to include young people who could grow, take up where older divers left off, and continue the discovery of a neglected history.

While training his younger divers, Stewart considers how many schools have failed to teach essential parts of history, like details of slavery. “There is a saying, ‘Those who don’t know their history are doomed to repeat it,’” Stewart said. “I tell [young people] that they have a voice and if they use it, history can never repeat itself.”

For 29-year-old Dr. Flewellen, the power of youth learning to map wrecked slave ships “puts the documentation, preservation and ultimate dissemination of this history into the hands of youth, who can then choose to move with as they may with this knowledge.”

“The hope is that this work brings about cultural stewardship among youth,” Dr. Flewellen shared.

For the young and old alike, there is much to be learned from the diving, archiving, mapping and discovery of these once-forgotten ships, whose boards once housed the ancestors and stories of families across the Diaspora that aren’t weighed in history books.

“[Your learn] the effect of the Transatlantic Slave Trade,” Dr. Flewellen said. “When you study these ships, and when you get to hold remnants of people’s everyday lives, you gain a deeper sense of the effect of enslavement and the value of freedom. These ships demonstrate just one aspect of the aquatic lives of enslaved Africans from that era.”

Slave shipwrecks — underwater cemeteries — are home to thousands of stories that remain untold, but, with the work of Diving With a Purpose, pieces have begun to come together.

Diving With a Purpose runs on grants, fundraisers and money acquired from training classes. To donate and help the group continue discovering pieces of Black history, click here.