This Is What The Black Women's Pay Gap Really Looks Like

Unfair pay and white male privilege seems to have a lot of attention lately, but I got my introduction to the topic a while back.

Some years ago in Brooklyn, before the grasp of gentrification completely squeezed out any affordable housing, I was living in a loft style apartment — the likes of which you only saw on sitcom television  — for an insanely cheap price. My roommate was an artsy, goth white girl from upstate New York who frequently alluded to her shady extracurricular activities. Even still, we had an amicable living arrangement that every now and then included a collaborative meal where we got sloshed on cheap chianti.

It was on one such occasion that she felt compelled — in a bizarre fit of guilt — to spill the tea about her new boyfriend, a mysterious white man 10 years our senior who made an effort to never divulge any information about himself. She had initially told me she was excited to date him, as he; shared her interests, had a good job as an IT director and lived in a tastefully decorated loft in the heart of Williamsburg, Brooklyn. Basically, he was corporate paid.

She said, “Amanda, I have to tell you something about B I feel like you should know. He’s a felon, years ago he got a manslaughter conviction for selling his friend heroin and his friend overdosed while B was there. B stayed and called the ambulance and they charged him. He was in prison for seven years…”

Now, maybe she thought I was going to kirk out by unknowingly having someone with a murder charge around me. However, my intuition honed in on something else.

I immediately said, “Wait! You mean to tell me a white man can sell heroin, kill someone, be in prison for seven years and come out with an IT director job and a luxury apartment?”

I saw the realization of white male privilege wash over her, “Wow. I guess I am saying that.”

That conversation highlighted her white female privilege, being the fact that his situation was even possible without her second guessing it,  but more importantly, that conversation was the first time I truly got an inside look at the tangible currency of white male skin.

In 2019, Black Women’s Equal Pay Day is August 22. For white women, this day is April19. This means, Black women will have had to work up until August 22 to earn what white men earned the previous year.

Discussing salary has long been a cultural taboo often times supported by employers to ensure their workers are unaware of any pay inequalities. Despite this, studies are now starting to show an inside look into the nature of race and gender based pay differences renewing the well needed conversation. 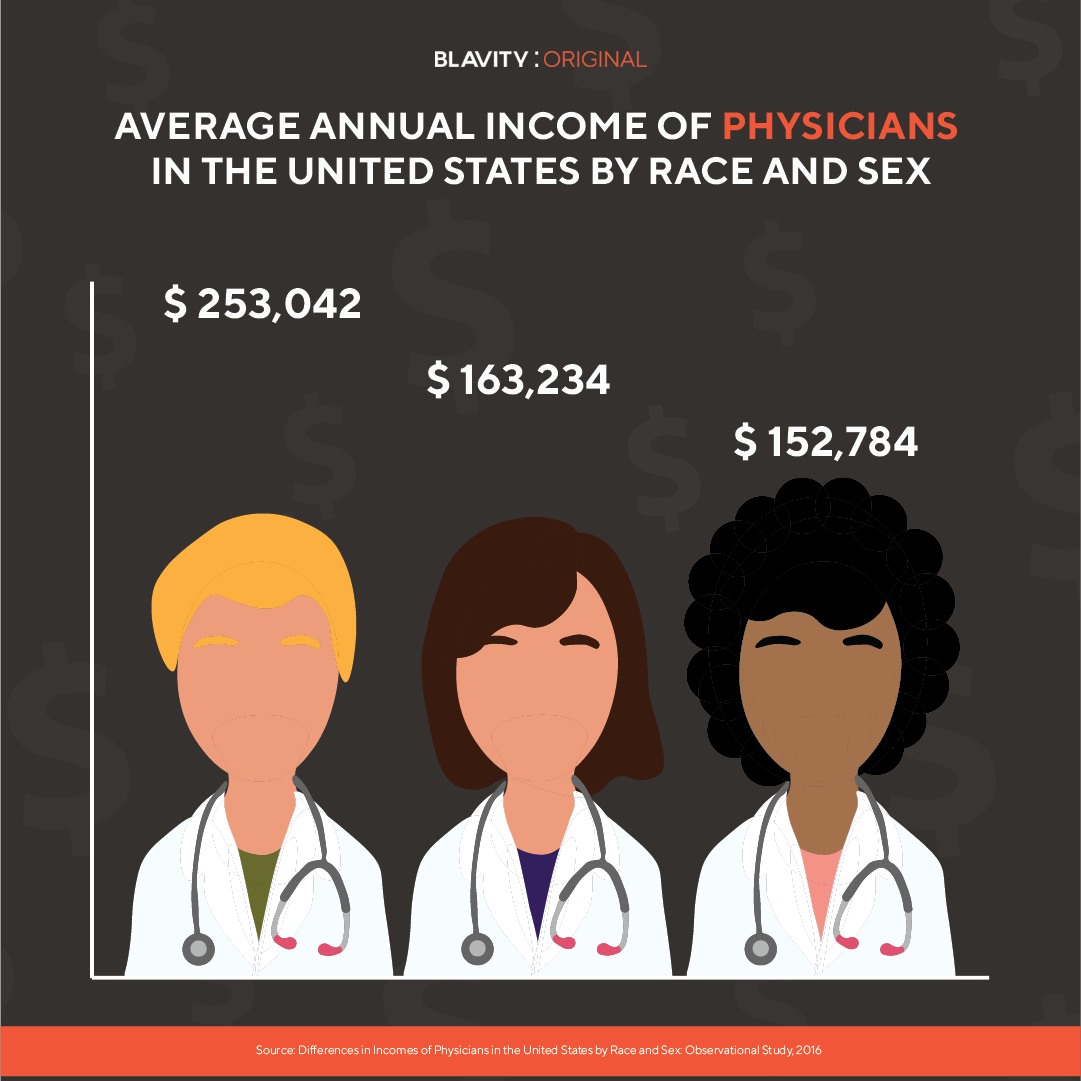 The myth that education is an equalizer to fair wages is probably most readily exposed in the pay gap of doctors and physicians.

Years of expensive education, residencies and state regulated certifications should ensure an even playing field. However, a 2016 study posted in the BMJ with data collected from the US Census reveals that Black physicians make $152,784 to a white male physicians $253,042. 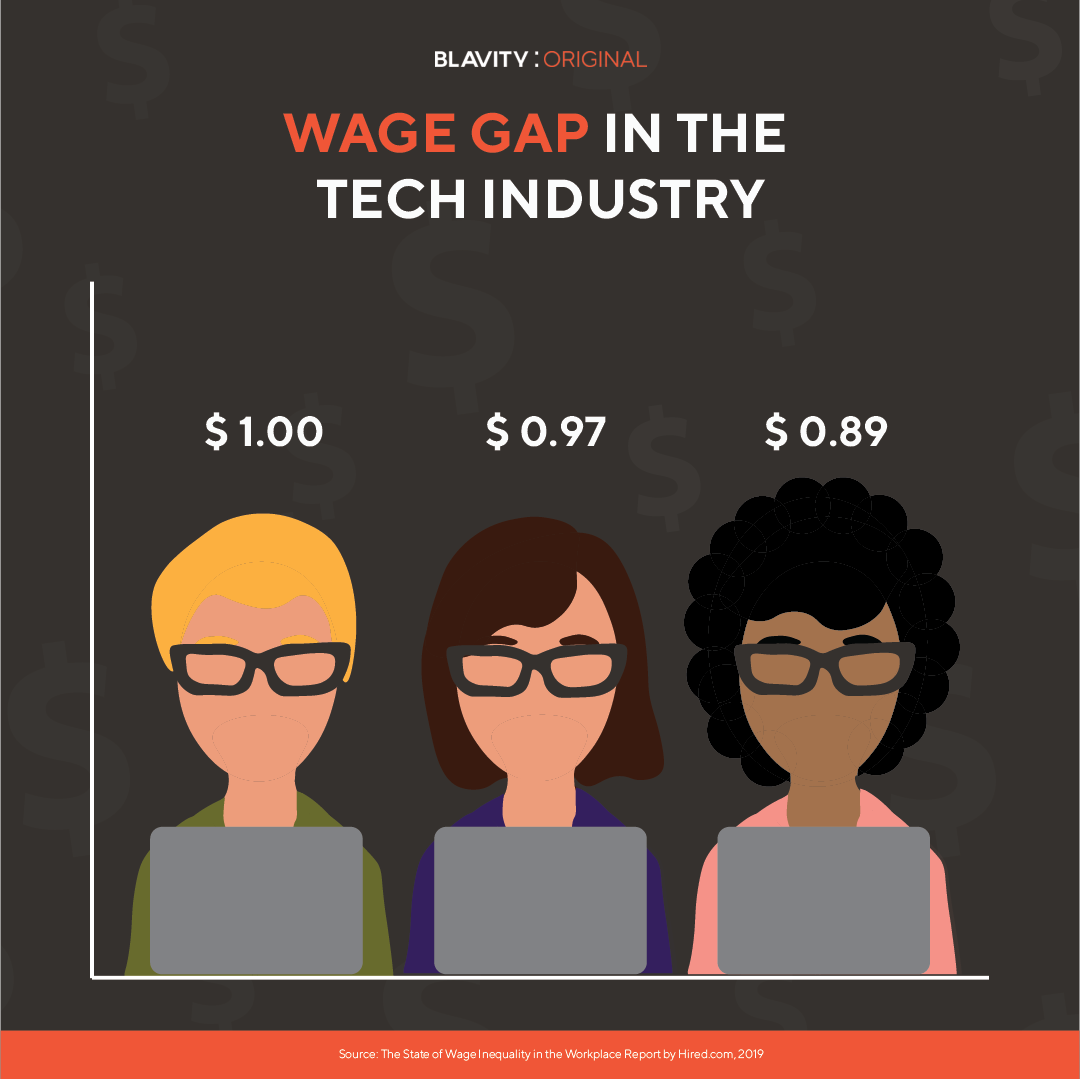 While the tech industry may have a reputation of being a modern and progressive workplace that has recently made an emphasis in supporting minority education inSTEM, data suggests that the tech industry is not as supportive of the adult minorities who actually get an opportunity to work in the field.

Hired conducted and posted a study that revealed, Black women earn “an average of 89 cents on the dollar when compared to the mark set by White and Asian males.”

Office administration is frequently stereotyped as a female centric role, but that doesn’t stop gender bias from deeming men more worthy of the position. 2017 findings published by the Institute For Women’s Policy Research (IWPR), showed that Black women earned $655 weekly, compared with white women at $708 and white men’s $774. 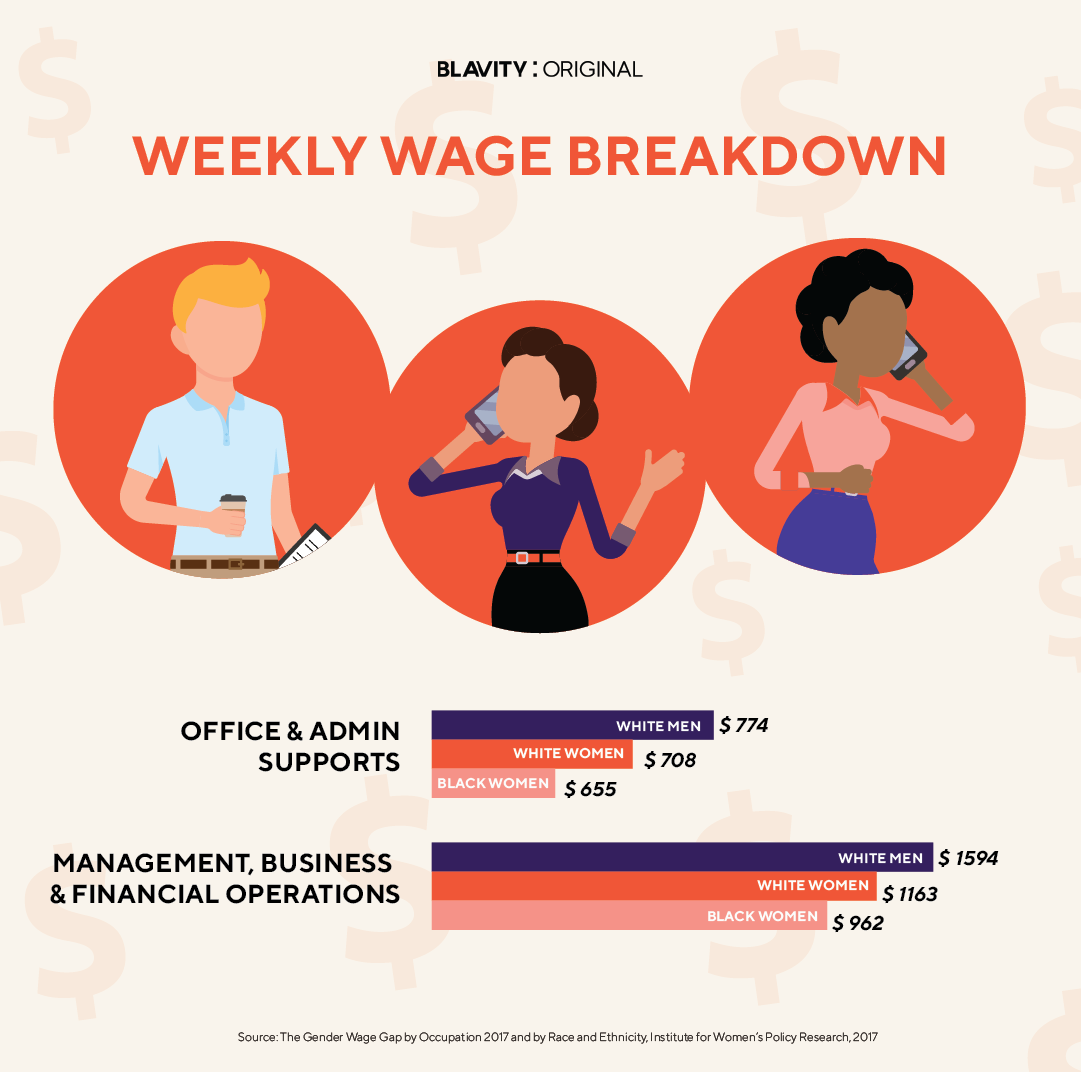 The same IWPR study revealed huge pay gaps in management, business and financial operations. A white man in this field makes $1594 a week, with white women bringing in $1163 and Black women making $962. 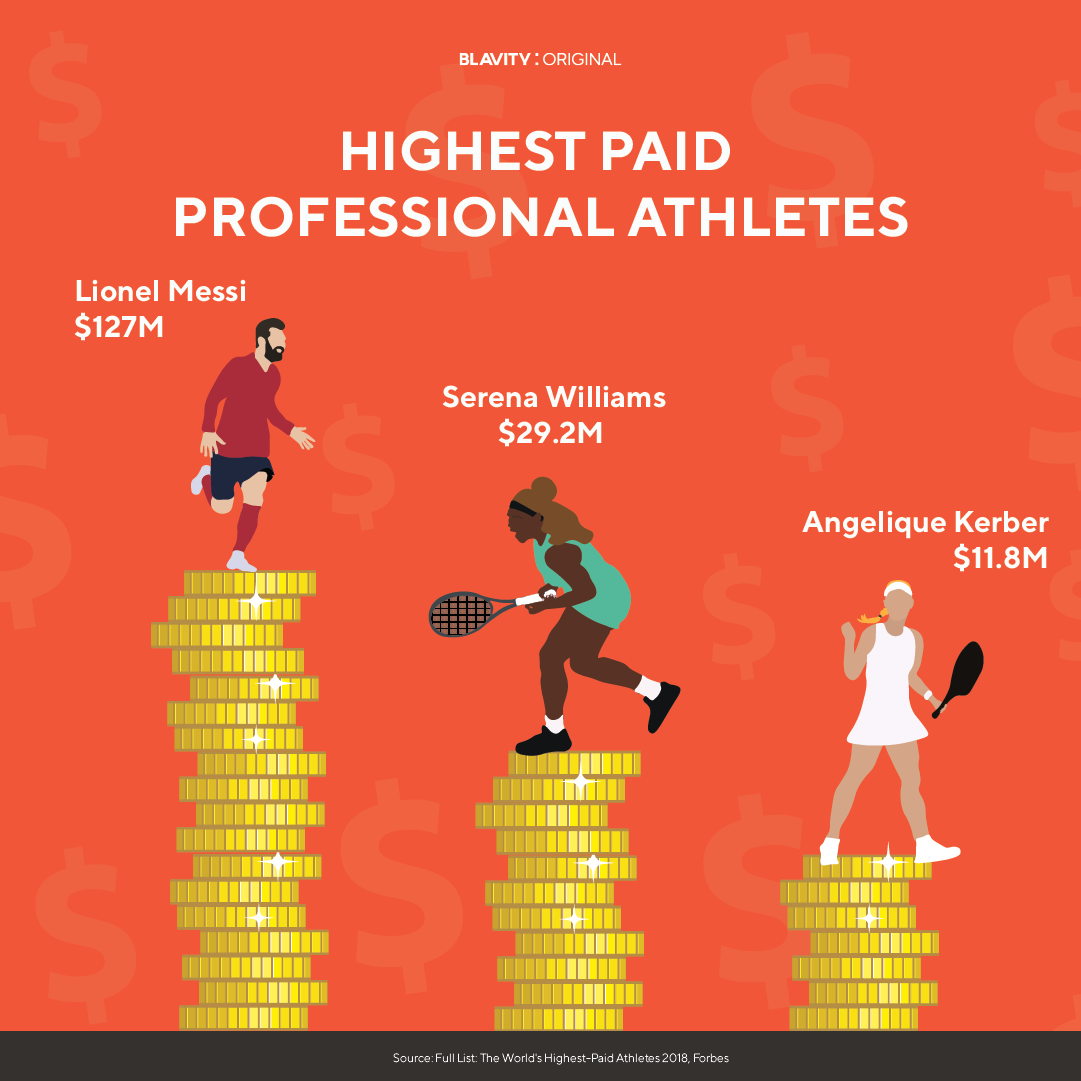 The #OscarsSoWhite controversy had an unprecedented impact on the Academy diversifying their voting pool. Still, Black female prestige actresses are not fulfilled when it comes to the money offered in comparison to their white “counterparts.”

In a 2018 interview with People, Academy winner Viola Davis stated, ““I have a career that’s probably comparable to Meryl Streep, Julianne Moore, Sigourney Weaver, …They all came out of Yale, they came out of Juilliard, they came out of NYU. They had the same path as me, and yet I am nowhere near them. Not as far as money, not as far as job opportunities, no where close to it.” 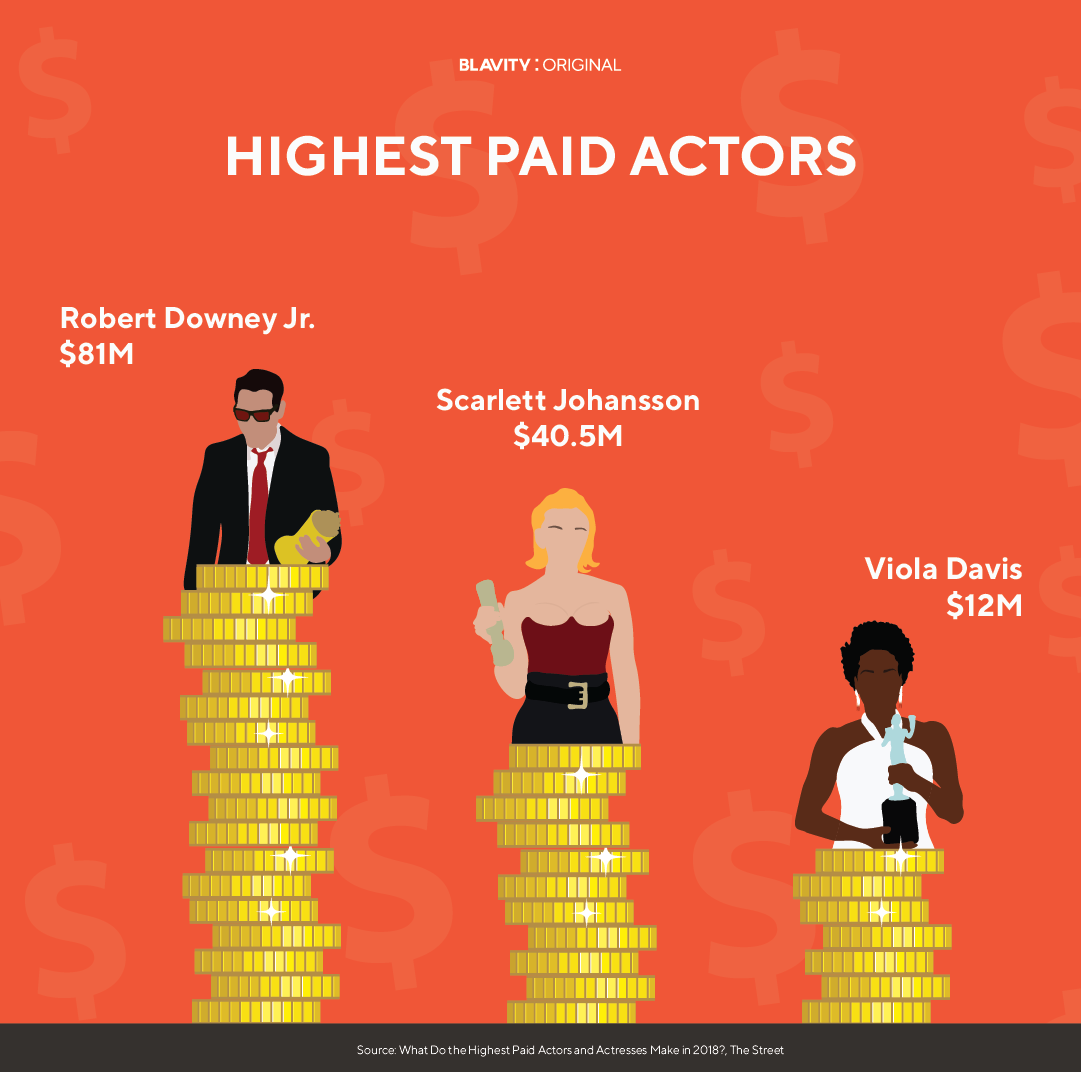 Film contracts are not obliged to be released, but we can potentially glean the wage gap by observing some of the highest paid Hollywood actors and actresses.

Black Women’s Pay Gap Day is an admonishment of a system of inequality. Presenting the most factual and important hard data there is— the absence of equal pay for equal work— highlights the unfair structure. While these numbers could be a reason to be discouraged, Black women simply don’t have the luxury. The public discussion around the issue suggests that unequal pay will continue to be a topic Black women won’t let go quietly, they can’t afford to.