The founders of She’s Happy Hair discuss their entrepreneurial journey to success.

Taking care of women’s hair is a full-time job. Ask any woman about her regular hair care regimen,  and she will likely spew a full itinerary that includes using multiple products, deep conditioning, intense detangling and styling among other steps. If she’s a woman of color, it can be like a job with mandatory overtime. To avoid the everyday drudge and toil, many women use hair extensions. As a result, Report Linker revealed the hair and wig business will reach $10 billion by 2023.

From a few tracks to bountiful bundles, Black military veterans Warren Broadnax and Marcus Bowers have gotten in on the hair industry action with their company She’s Happy Hair. The Houston, Texas-based CEOs shared their remarkable success story, and why they chose to enter the beauty industry to serve Black women and other women of color.

“We first met in high school, and because we both grew up in poverty, we ended up going to the Navy in hope of a better life,” Broadnax said. “Marcus left the Navy, and went on to college and obtained several degrees before beginning work as an engineer. I became a Houston firefighter.”

Although the two men had profitable careers, they were not always able to make ends meet. As a result, they sought out ways to live more prosperous, fulfilling lives. Their need to survive became the driving force for the She's Happy Hair brand and the She’s Happy Foundation. 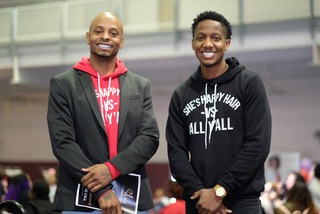 “We both have always had an entrepreneurial mindset, and knew from the very beginning that we were going to give this business our all. From day one, we treated it as a business and not a hobby,” Broadnax told Blavity." It started with Marcus making a phone call, asking me if I would be interested in going into the hair business with him because he knew of a few guys that made about $4000 in a weekend — selling hair. Neither one of us knew anything about hair, but knew we needed to figure it out.”

As a Houston firefighter, Broadnax only worked a couple of days a week.

“I used my days off to go into the beauty salons and ask a ton of questions to learn all that I could about the hair industry and what women were actually looking to purchase,” he said.

After completing initial research, Bowers and Broadnax depleted their bank accounts — the total being $900 — and invested in their first batch of inventory. Both men say that their military training has definitely been an important factor to their success, crediting their discipline, fearlessness and drive as tools they still use today. 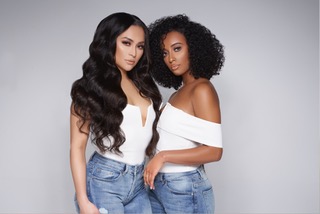 Since no entrepreneurial journey is devoid of its fair share of challenges, the founders of She’s Happy Hair learned early on how to overcome their tough times. Through trial and error, Bowers and Broadnax consistently apply their best efforts to make sure their business not only remains afloat, but also prospers.

“There are always going to be challenges and obstacles in every business,” Bowers said. “The day before our grand opening of our first location, we were robbed. Someone came in and stole all of our inventory. We could have used that as an opportunity to give up, but we pushed harder, [got] stronger, and accepted it as a valuable lesson. We have locations across the United States and all of our stores have top-notch security now.”

There is much to be admired about the way Bowers and Broadnax have persevered. From an outside perspective, being an entrepreneur can appear to be an easy journey, but the reality is that it is far from it. In fact, anyone considering embarking on the entrepreneur road must accept that there will be periods of slow progress and must allow room to fail.

“Anyone, any business has to embrace the failures,” Broadnaux exclaimed.

It’s not so much about what obstacles are faced, but how the obstacles are handled. It seems Bowers and Broadnax have mastered how to handle obstacles, and as their knowledge has grown, their business has, too. With a diligent work ethic, support of quality products and high demand from consumers, She’s Happy Hair has expanded into six independent locations between Texas and Michigan. In addition to the six locations, She’s Happy Hair recently partnered with Macy’s and Walmart.

“The process has taught us patience,” Bowers said.

In order to expand their outreach, the two needed to take calculated risks. Dealing with major retailers oftentimes requires rules and regulations. Knowing the brands worth allowed the partners to make smart business decisions, each time the right opportunity arose. The risks and negotiations made more room for opportunities like Macy’s and Walmart. Beyond making money, the co-founders have been fortunate enough to give back to their community. 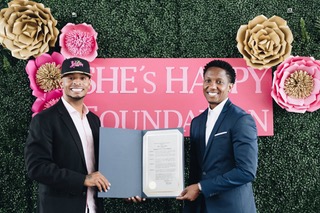 Along with She’s Happy Hair, the conscious businessmen launched the She’s Happy Foundation as a means to assist the children and families of inner-city Houston. She’s Happy Foundation provides resources for food, education and mentorship programs. The organization facilitates programs to assist youth with career development and skills that they can utilize after high school. Initiatives like their financial independence program titled Pathway to Independence; Beyond High School, which helps students get to and through college; and the STEM Pathways Program are just a few routes the organization is taking to give back.

“We wanted to instill valuable lessons to the inner-city youth that don’t see successful people that look like us. We also wanted our customers to know that we do care for them, not just to make money off of them. Our customers are spending their hard-earned money with us, and we want them to know that a portion of those funds are going back into the community, to help those that are in need,” Broadnax said.

As for the best advice they can give to a new entrepreneur, or someone who is facing adversity while working towards a goal, the serial entrepreneurs said to "be fearless, relentless and never give up.”

“Some days will be much harder than others and you definitely will encounter some fails, but learn to embrace them and learn from them," Broadnax said. “Never forget your 'why': Why did you start and how did you get here? Stay hungry. Be nothing less than passionate about the grind and you will achieve your goals.”

She’s Happy Hair can now be found in Macy’s in Lenox Square Mall, as well as a rollout of retail spaces within six Walmarts across the country — with Atlanta being top priority on the destination list.