During an age when instant gratification and cheap laughs are a commodity, especially on social media, it’s important to be able to play the game correctly and quickly. Brands know this. They’ve known this for a few years now. But they’re still making the same mistakes. Take Red Lobster’s radio silence after Beyoncé so graciously mentioned them in her newest single, "Formation." Not only did she practically break the internet, but she gave the Golden Gate Capital chain a lot of free publicity, so much that their sales shot up. But now, about a month later, the account is back to tweeting lame, obnoxiously staged photos of lobster tails (that always seem to look better than the real thing by the way)
It’s not just Red Lobster though, plenty of brands miss out on large pop culture opportunities or fail to reach their audience in ways that don’t seem forced. Chipotle tweeted this random gem a few weeks back in the midst of one of their own employees getting norovoris from their food. Not only was the tweet out of place because it didn’t fit the brand’s social voice, but it was negligent because there were bigger issues that the brand could have and should have been addressing 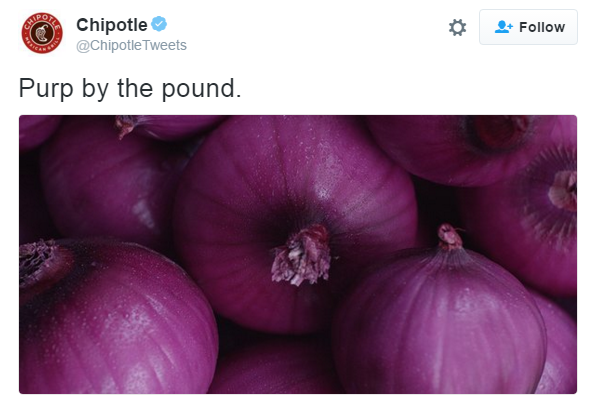 Photo: Twitter The struggle brands must overcome is the need to stay true to the brand and the want for really great engagement on Twitter. The truth is, even if the tweet does seem out of place for the brand, people will still take notice and retweet it, even the haters. It’s why AARP’s tweet about the late rapper Biggie Smalls a few years ago got more engagement than anything they’ve tweeted since. It was random and unexpected, so people loved it. However, it had nothing to do with the brand, nor did it even fit their voice
Why not try to capture that type of engagement all the time? Although it’s true that some pieces of content will perform better than others by sheer luck, there has to be some strategy behind the content brands are putting out, especially the ones that use Twitter as their main avenue of communication with their fans

To me, the solution is simple: A knowledge of culture.

Plenty of people have said it before. I’m not saying something revolutionary, but how many times does it have to be said before agencies' social media teams actually do something about it? It’s not so much about having a person of color behind the computer as it is having people on the team that understand Twitter (and social media in general), and I mean really understand it. You need the person that is plugged in 24/7 and can see a hashtag beginning to form and know that it’ll take off within hours. Having someone tuned into #BlackTwitter (where many brands get ideas for their content, whether they realize it or not) as a meme or hashtag is born can be invaluable to a brand, especially if it fits the brand’s voice. Imagine what could have been done with the #MemeHistory hashtag. Being able to anticipate these things right before they happen or as they're starting opens a window of opportunity for a brand to insert their voice without seeming out of place
Twitter fame comes fast. It leaves fast too. Brands have to recognize that it isn’t just a 9-5, Monday-Friday thing. If you’re a food brand and you know your audience tends to enjoy eating your brand while watching a sporting event, then you absolutely should be tuned into what’s happening with March Madness. You have to be
It’s sad to see a brand compromise their social voice just for a few hundred retweets. Who cares about the engagement of one tweet if it doesn’t have a lasting impression, or if most of those engagements are from fans criticizing you
Making content that has an impact is harder. It involves knowing your audience and understanding what type of content goes viral. Millennials, the target of most of this content, aren’t stupid. We know that you want our attention and that our voice matters. I urge brands and agencies alike to dig deeper. Read up on #BlackTwitter, read what your audience is tweeting about all the time, not just after something big happens. When your team sees something funny that could be applied to a brand the agency represents, figure out where it came from, or at the very least make sure you’re using it correctly in your content

If brands want to win on Twitter, they’re going to have to try harder. Because right now, we see right through the half-hearted attempts.

Photo: Giphy What do you think brands can do to resonate better with black millennials? Let us know in the comments, or share the article with #BlackTwitter!

READ NEXT: Watch this 24-year-old surprise his grandparents with the check of a lifetime