In the last Super Tuesday primary before the Democratic convention, Clinton won South Dakota, New Mexico, New Jersey, and California. With these wins, Hillary Clinton's delegate count stands at 2,755. On the other hand, Sanders won Montana and North Dakota bringing his delegate count to 1,852. Both including superdelegates. Even though the Associated Press claimed Hillary Clinton had clinched the nomination on Monday night, it wasn't until Tuesday that she acknowledged victory

In a text sent from her camp, she thanked supporters and asked for financial to continue the fight.

The Clinton family sent their gratitude to supporters on Twitter.

So proud of you, Mom & grateful little girls can grow up knowing they can run for president https://t.co/jgM7RbUAKQ

I keep saying Hillary is the ultimate changemaker, and tonight she proved it. I couldn't be more proud. History made. #ImWithHer — Bill Clinton (@billclinton) June 8, 2016

The Democratic National Convention has not declared Clinton the official winner. Tuesday night was a huge win for not only Clinton but for women everywhere. Even though it was a historical moment Bernie Sanders was slow to acknowledge it and told a crowd in Santa Monica that he will continue to fight until the convention in Philadelphia. Sanders boldly announced that his vision will be the future of America and that he will continue to fight for every vote and every delegate he can get

Bernie Sanders: I am pretty good in arithmetic and I know that the fight in front of us is a very steep fight. https://t.co/Qix3TH02ko

President Obama, who has remained relatively quiet regarding the primaries, called both Sanders and Clinton Tuesday night.

President Obama has not endorsed a candidate yet and is expected to meet with Sanders at the White House on Thursday. White House Press Secretary Josh Earnest told reporters that the meeting will be about "how to build on the extraordinary work he has done to engage millions of Democratic voters, and to build on that enthusiasm in the weeks and months ahead." As for the Republican side, ABC News finds Clinton leading Donald Trump in electoral ratings before tough battleground contests 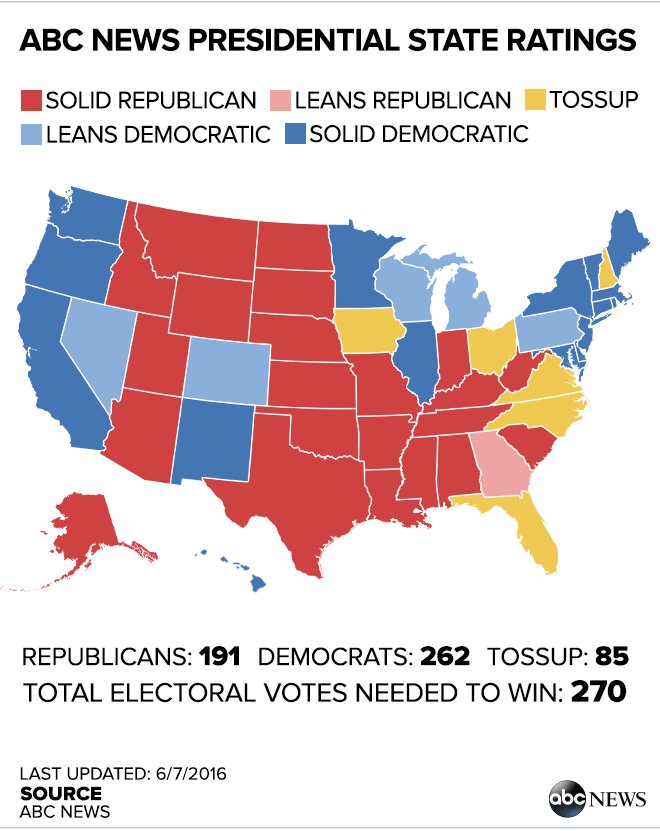 READ NEXT: Why Black Students Are Nearly 4 Times as Likely to Be Suspended